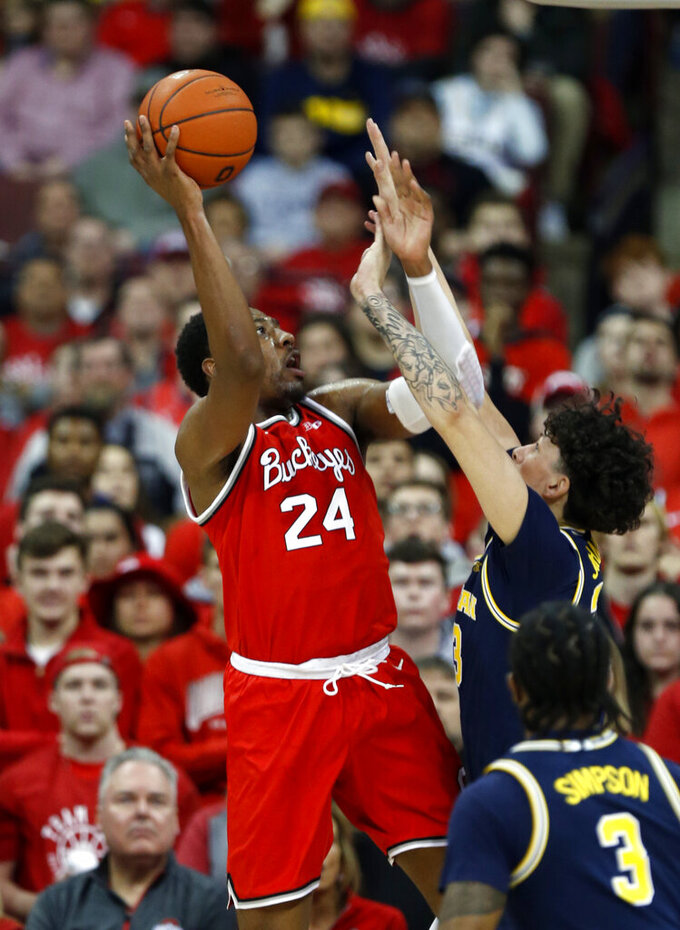 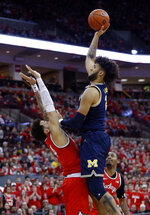 COLUMBUS, Ohio (AP) — After slogging through a miserable January, No. 23 Ohio State has won eight of its last 10 games, a surge that culminated in a 77-63 victory over No. 19 Michigan in front of sold-out crowd Sunday.

The Buckeyes (20-9, 10-8 Big Ten) did it by overwhelming the Wolverines late. After Michigan's Jon Teske hit a 3-pointer to tie the game at 54 with 6:41 left, CJ Walker's jumper and back-to-back 3s by brothers Andre and Kaleb Wesson touched off a 23-9 Ohio State run to cap the victory.

Ohio State was led by its guards, but all five starters hit double figures. Duane Washington Jr. tied a career high with 20 points, and Walker had 15 and a career-tying six rebounds. Andre Wesson and Kaleb Wesson each had 14 points.

The resurgence from Ohio State came after a 2-6 start in Big Ten play in 2020 and the announcement that guard D.J. Carton was leaving the team for mental health reasons.

“Listen, we realize plenty of people wrote us off,” Ohio State coach Chris Holtmann said. “When we were 2-6 they made fun of us. We had people kind of making fun of us and, you know, putting all their sarcastic tweets out there. I got them all saved. All of them.”

The Buckeyes have won three straight, swept the season series against Michigan, winning 61-58 in Ann Arbor on Feb. 4, and reached 20 wins for the third straight season and the 30th time in school history.

Franz Wagner had 18 points and 10 rebounds for the Wolverines (18-11, 9-9), who lost their second straight after winning five in a row.

The two teams have followed s similar pattern: a hot start, January doldrums and improved play down the stretch.

Ohio State led 32-29 at the half behind Washington’s 12 points and 3-for-4 shooting from 3-point range. The Buckeyes did not allow Michigan an offensive rebound in the first half.

Both coaches acknowledged that late 3-pointers from the Wesson brothers was the spark that pushed Ohio State ahead to stay.

The Buckeyes had a 56-54 lead when Andre Wesson hit a falling 3-pointer that banked in off the glass. Then, after a defensive rebound by Ohio State, Kaleb hit a bomb to stretch the lead to 62-54. He banked in another 3-pointer with 1:36 left to make it 73-60.

“Unfortunately, when guys are making shots like that, then obviously their confidence levels are extremely high,” Michigan coach Juwan Howard said. "It was a back-breaker for us."

“It was just one of those days for balls falling,” Washington said.

Michigan: The Wolverines hate to lose to Ohio State, and they did twice this season. This one came after they lost to Wisconsin 81-74 at home on Thursday.

Ohio State: The Buckeyes have shaken off their mid-season malaise and seemed poised to take some momentum into the NCAA Tournament.

“We're built for this,” said Walker, a Florida State transfer.

“It's a long season," he said. "I've always said the Big Ten is a tough conference that has it's ups and downs. Right now we're on our up so we'll just try to stay consistent with that and keep going.”

With plenty of Top 25 losses this weekend, the Buckeyes could move up a few slots in the AP Top 25 and likely will be among as many as 10 Big Ten teams to make the NCAA Tournament.

Ohio State forward Kyle Young missed his second game with a high-ankle sprain suffered in the Feb. 23 win over Maryland. He is day-to-day.

Michigan: Hosts Nebraska on Thursday before finishing the regular season at No. 9 Maryland on March 8.

Ohio State: Hosts Illinois on Thursday before wrapping up the season at No. 24 Michigan State on March 8.