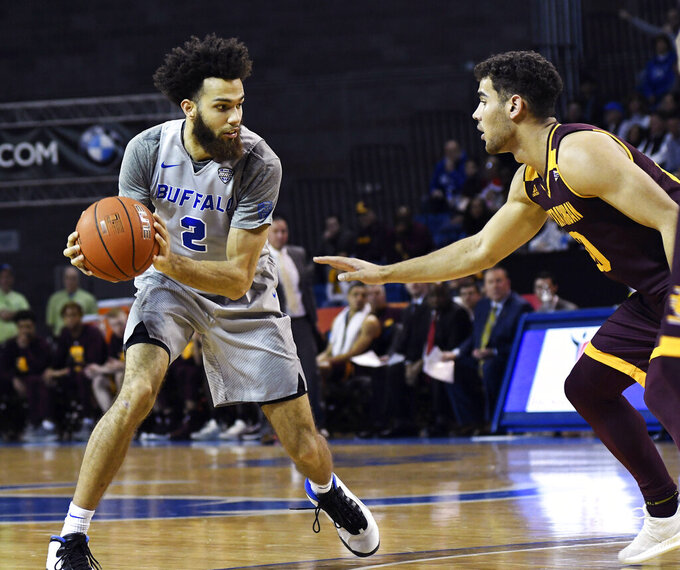 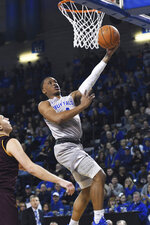 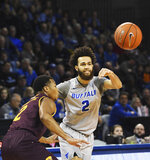 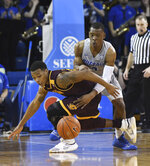 AMHERST, N.Y. (AP) — Battling through injuries and playing without one of its best players for a half, No. 23 Buffalo was resilient and rallied for its 22nd straight win at home.

Jeremy Harris had 19 points, eight rebounds and six assists, and the Bulls overcame an 18-point first half deficit, their largest of the season, to beat Central Michigan 90-76 on Saturday.

"It speaks to our character," Buffalo coach Nate Oats said. "What we were able to do when our backs are against the wall and we're not playing well."

CJ Massinburg, who has an injured right shoulder, poured in 18 points after playing tentatively in a scoreless first half. Dontay Caruthers added 16 points after missing a week of practice with a foot injury that required him to use crutches just a few days earlier.

Buffalo (20-3, 8-2 Mid-American Conference) got 10 points and six rebounds in the second half from senior center Nick Perkins. The Bulls' leading rebounder and second-leading scorer was benched for first 20 minutes for violating team rules in the locker room following the team's last game, a 92-88 loss at Bowling Green on Feb. 9.

"He was great for us in the second half," Oats said. "His attitude has been great all week. It was literally nothing big. Just wanted to help him grow up and be a man a little bit. And I thought he responded."

Perkins' absence was notable early as the Bulls struggled to defend the basket and control the boards. Central Michigan used a 24-4 run to build an 18-point advantage in the first 12 minutes. Buffalo closed the gap before halftime and pulled away with a 16-0 run in the second half.

"Just an effort thing," Massinburg said. "Once we were able to start playing hard and see the ball go through the net and get a steal, then we were able to get it rolling."

Buffalo forced Central Michigan into a season-high 23 turnovers, five more than the Chippewas had totaled over their previous two games. The takeaways contributed to the Bulls scoring 30 points on fast breaks.

Central Michigan's leading scorer, Larry Austin Jr., played 24 minutes and fouled out with 9:19 remaining. Three of Austin's fouls came on the offensive end, including the disqualifying one. He finished with eight points, less than half of his season average entering the game (17.6), and seven turnovers.

Central Michigan: The Chippewas could not maintain their early hot shooting and fell to .500 in MAC play after winning two in a row. They have lost their last three on the road.

Buffalo: Having refocused during an eight-day break after dropping two of its past four conference games, the Bulls reached the 20-win milestone for fourth time in five years.

Buffalo: The Bulls start a two-game trip Tuesday at Akron.