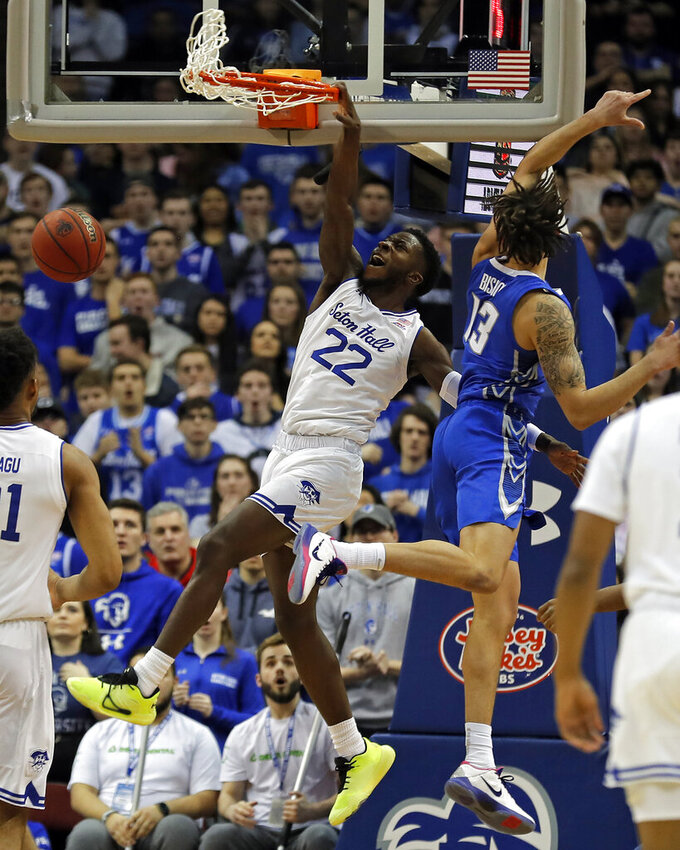 NEWARK, N.J. (AP) — There is more to the Big East Conference this season than Seton Hall, Villanova, Butler and Marquette. Watch out for Creighton.

Damien Jefferson, Ty-Shon Alexander, Marcus Zegarowski and Denzel Mahoney all scored 18 points and No. 23 Bluejays posted their second road win over a Top 10 team this month with an 87-82 decision over No. 10 Seton Hall on Wednesday night.

“This game was huge," Zegarowski said. “They’re a top 10 team. Especially in this league, to win on the road is huge. Every game is big for us.”

The Bluejays, who beat then-No. 8 Villanova to start the month, are within striking distance of the first-place Pirates six games to go.

“We're fighting to keep ourselves in this title race and we if we were going to stick around, we had to win tonight,” Creighton coach Greg McDermott said. “We're back within two games. Every win like this helps you in the NCAA Tournament picture but in this league it is really fragile. Anything can happen and you're a sprained ankle or the flu away from a three-game losing streak.''

Quincy McKnight had 20 points to lead Seton Hall (18-6, 10-2), which lost for the second time in 14 games. Sandro Mamukelashvili and Romaro Gill added 13 points apiece for the Pirates.

“They just played a better basketball game than us today,” Gill said.

The key to Creighton's win was the defensive job it did on Preseason All America Myles Powell. The senior guard, who was averaging almost 22 points, finished with 12 points on 3 of 16 shooting from the field, including 1 of 11 from long range. The made 3 was in the final seconds.

Seton Hall managed to cut the lead to three points twice, but Powell missed a tying 3-point attempt on the second time.

A layup by Gill closed the gap to 75-74 with 1:21 but Mahoney nailed a wide-open 3-pointer with 1:06 left to push the lead to four points. A three-point play by Jared Rhoden got the Seton Hall with 81-79 with 16 seconds left but Alexander hit four free throws and Mahoney two to ice the game.

Zegarowski hit a short jumped in the waning second to give smaller and quicker Creighton a 41-39 halftime lead. Neither team led by more than eight points in the opening 20 minutes and both teams saw a big man get in foul trouble.

Bishop and Sandro Mamukelashvili both picked up three fouls in the first half.

Powell, who was named the conference player of the week on Monday, missed all five of his shots in the half and had five points.

Creighton: This is a quick, good-shooting team. They are peaking and have gotten better since Mahoney became eligible at the end of the first semester. A higher spot in the rankings is coming. This marks the first time since the Bluejays joined the Big East in 2014, they have beaten two Top 10 teams on the road in the same season.

Seton Hall: The Pirates stayed close despite Powell. He can't afford to have a game like this in the NCAA Tournament if Seton Hall expects to do anything. They will drop a little in the poll.

“We can’t rely on him all the time," McKnight said. “He’s going to have a game like this. We’ve just got to bounce back like we always do.”

Creighton guard Mitch Ballock came into the game, averaging 12.8 points. He didn't score for the first time this season, missing all seven of his shots. His streak of making a 3-pointer in 23 straight games ended.