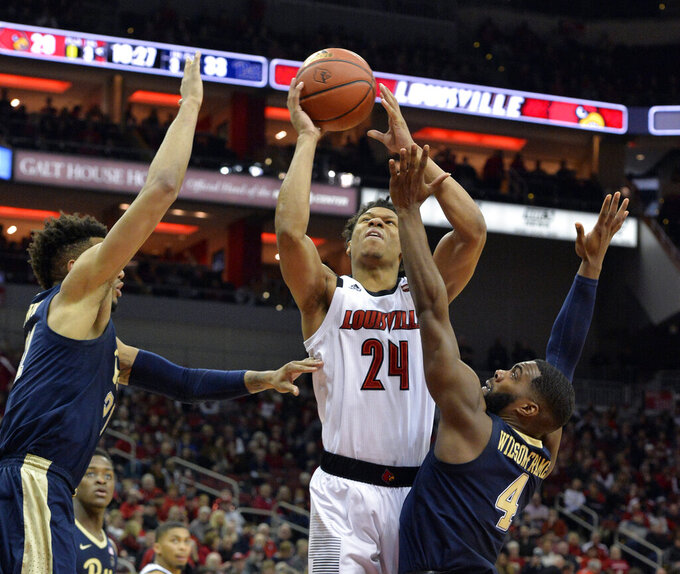 Louisville forward Dwayne Sutton (24) goes up for a shot between the defense of Pittsburgh forward Terrell Brown (21) and guard Jared Wilson-Frame (4) during the second half of an NCAA college basketball game in Louisville, Ky., Saturday, Jan. 26, 2019. Louisville won 66-51. AP Photo/Timothy D. Easley) 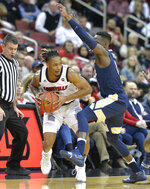 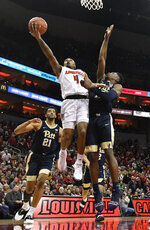 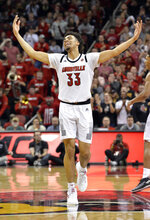 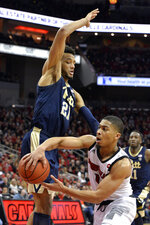 LOUISVILLE, Ky. (AP) — The shots weren't falling for No. 23 Louisville on Saturday, so the Cardinals needed to make sure the same thing happened to Pittsburgh.

Jordan Nwora scored 17 points to help Louisville rally past Pitt 66-51 and avenge its only conference loss this season.

The Cardinals (15-5, 6-1 Atlantic Coast Conference) shot just 39 percent, but their strong defense shut down the Panthers (12-8, 2-5) for 6:04 of the second half. Pittsburgh led 41-40 after Trey McGowens' three-point play with 15:37 remaining. Louisville scored just eight points during the Panthers' drought, but it was enough to take the lead for good.

Louisville coach Chris Mack said his team's defense Saturday was much improved from the last time the squads faced each other. Even as Pitt led for stretches, the Cardinals defense allowed the game to stay within reach.

"The difference was we played much better offense" in the second half, said Mack, whose team committed just two turnovers after halftime.

On Jan. 9, Pitt shot 52.5 percent in an 89-86 overtime victory over the Cardinals for its first ACC victory in nearly two years. On Saturday, the Panthers recorded a season-low point total thanks in large part to shooting less than 27 percent and committing 13 of their 17 turnovers in the second half.

"We didn't do a good job of valuing the basketball," Pitt coach Jeff Capel said. "That's what won the game for them."

After being held to three points on 1-of-5 shooting and playing only 11 minutes after getting two fouls in the first half, Nwora made 5 of 11 shots after halftime. His 3-pointer from the left corner as the shot clock expired gave the Cardinals a 65-47 lead, Louisville's largest, with 3:21 left.

Steven Enoch came off the bench to add 12 points and tied a season high with 11 rebounds.

Despite being held scoreless for a nearly six-minute stretch in the first half as well, the Panthers led 33-29 at halftime because of tough defense. They held the Cardinals to 37 percent shooting over the first 20 minutes and forced 11 turnovers in the half.

Coupled with a win Thursday over No. 21 North Carolina State, the Cardinals should be ready for a jump in Monday's poll. Seven teams ranked from No. 13-22 have already lost this week.

When Pitt beat Louisville, it did so behind McGowens and Xavier Johnson, two freshmen guards who paired to score 54 points. On Saturday, Louisville held the two to just 16 points combined on 7-of-21 shooting. The main reason why that production went down was Louisville's defensive adjustment that kept the youngsters from driving to the hoop.

"They both can finish very well," Nwora said. "In terms of shooting is really not the strength of their game. We can stop them from getting into the paint."

Pittsburgh: The Panthers held the conference's best scoring team to more than 17 points off its ACC average, but they saw their production continue to dwindle as well. In losing three straight, the Panthers, who average more than 74 point a game, have not scored than 64. Capel said his young team may be going through some fatigue, but "no one is going to feel sorry for us. We can't feel sorry for ourselves. We have to keep fighting and keep competing."

Louisville: Since falling to the Panthers, the Cardinals have won five straight. Saturday's point total marked its lowest output since a loss to Kentucky nearly a month ago. Grinding out a victory despite weak shooting could give the Cardinals more confidence for the upcoming grueling schedule.