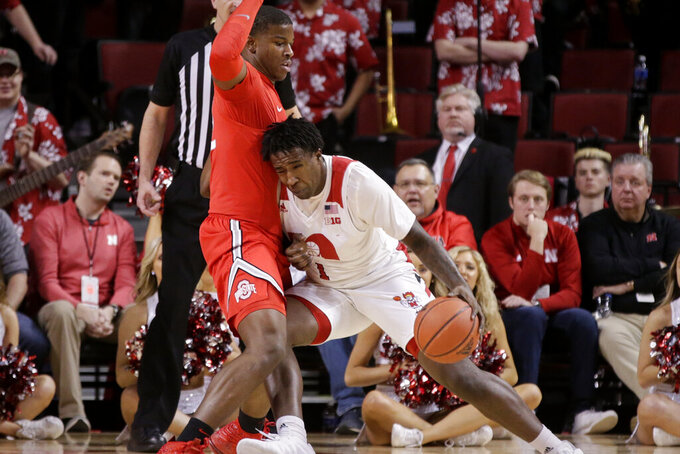 Making his first start since Jan. 11, Washington hit three straight 3-pointers to open the game to get the 23rd-ranked Buckeyes started in a 75-54 victory over Nebraska on Thursday night.

“He has helped us in a couple games get off to really good starts," coach Chris Holtmann said. "He's got a good mindset about him whether he starts or comes off the bench, and those 3s he hit really kind of gave us some confidence early.”

While Washington scored from the perimeter and finished with 14 points, Kaleb Wesson took over inside, scoring 16 points and grabbing a career-high 18 rebounds as Ohio State (19-9, 9-8 Big Ten) won for the fourth time in five games.

The Buckeyes rode the momentum of their 79-72 win over Maryland on Sunday to a fast start in their second win over the season over the Cornhuskers. They led 26-12 after making 9 of their first 11 shots, including 5 of 6 3-pointers.

“It's hard to give up five 3s right off the bat and then have to dig yourselves out of that hole,” Nebraska's Thorir Thorbjarnarson said.

The 6-foot-9, 270-pound Wesson scored eight of the Buckeyes' first 16 points of the second half, working over whoever the undersized Huskers sent to defend him while posting his 11th double-double of the season.

The Buckeyes never led by fewer than 14 points after half, but their offense operated at nowhere near the efficiency it did early in the game. They shot 33 percent the final 20 minutes and missed 18 of their last 19 3-point attempts.

“We are a really good shooting team. We missed some open ones tonight, and they do a good job flying at your shot," Holtmann said. "I thought we had some patchiness offensively that I didn't love.”

C.J. Walker had 15 points and matched his season high with five rebounds.

“This game was different from our past games in that it wasn't really close at half," Thorbjarnarson said. "Even though we held them to way less points in the second half, the resistance in the beginning wasn't good enough, so we couldn't chop down that lead.”

Ohio State: The Buckeyes lose some size with Washington taking over for the injured Young, but the Big Ten's top 3-point shooting team gains another perimeter shooter. Ohio State lost two games earlier in the season when Young was out because of an appendectomy. The Buckeyes are playing well enough right now to be able to withstand Young's absence.

A win over Nebraska won't move the needle much for Ohio State. The Buckeyes' opportunity for a promotion comes at home against No. 19 Michigan, which lost to Wisconsin on Thursday.

Young sprained an ankle against Maryland and is listed day-to-day, Holtmann said. Young is averaging 7.5 points and 5.8 rebounds. “Kyle is a big part of what we do,” he said, “so it's a concern for sure.”

With the end of the worst regular season in program history winding down, Thorbjarnarson was asked about what could motivate the Huskers at this point.

“The Big Ten Tournament,” he said. “Doesn't matter how the season ends, every team gets a shot. With three games to go, we just have to try to get some momentum going into that. We have a perfect opportunity Sunday against Northwestern.”

Ohio State goes for the two-game season sweep of the Wolverines on Sunday. The Buckeyes won 61-58 in Ann Arbor on Feb. 4.

Nebraska's game against Northwestern matches the Big Ten's bottom two teams. The Wildcats beat the Huskers 62-57 in January for their only conference win.