No. 23 Ohio State rallies past UMass-Lowell in 2nd half 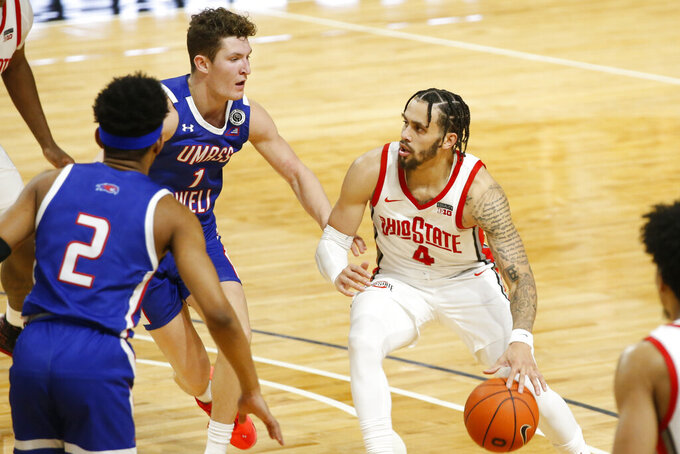 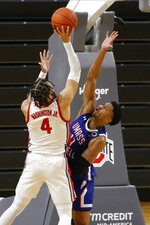 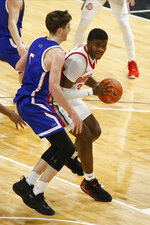 Washington took a pass from teammate C.J. Walker and hit a 3 from the left wing for a 70-63 lead with 1:07 left to all but clinch it for the Buckeyes (2-0). Up until that point, UMass-Lowell’s zone defense had made it difficult for the Buckeyes to get a lot of clean looks.

“I give our guys credit for finishing the game and making the necessary plays that we needed to,” Ohio State coach Chris Holtmann said. “I don’t think we attacked their zone really well. I thought it slowed us down. I don’t think our pace and attack was very good. It was our first time of seeing almost 35 minutes of zone."

Washington had made only two of his first 10 3-point shots before his critical one with just over a minute left.

“The saying is shooters shoot and you’ve still got to be confident in yourself," Washington said. “I believed in myself. I let it fly with confidence and put it in.”

“We had a chance to win it right down to the last minute," UMass-Lowell coach Pat Duquette said. "That was a great spot for us to be in. But we made a couple careless mistakes in a crucial point in the game.”

The game was tied 33 at halftime after Ohio State shot just 34% from the floor and went 0 for 8 on 3s. UMass-Lowell led by as many as five points on three occasions early in the second half.

Ohio State benefited from a four-point play with 9:35 left when Daley fouled Sueing on a drive. Daley was assessed a technical foul for arguing, giving him five fouls and ruling him out for the rest of the game. He was the River Hawks’ leading scorer with 11 points at the time. The four free throws put Ohio State up 53-51.

“It certainly turned the momentum,” Duquette said. “That was a big swing. I thought we were in control, but then they took control.”

Noel tied it at 59 with a 3 for UMass-Lowell with 5:57 left. But Liddell scored inside and Sueing had a layup off a long rebound to give the Buckeyes a 63-59 lead.

Washington’s 3 with 1:07 left just beat the shot clock, and Ohio State put away the game at the foul line.

Ohio State: The Buckeyes found out that all games will not be as easy as their opener, where they defeated Illinois State 94-67 and were hardly threatened. Ohio State struggled at the offensive end, especially on 3-point shooting, where the Buckeyes made 22% (4 of 18) behind the arc.

UMass-Lowell: The River Hawks played a much better game Sunday against a better opponent than they did in an 82-72 loss to Illinois State on Saturday. That should bode well as UMass-Lowell moves toward America East Conference play.

The game was played at the 18-month-old Covelli Center. The move was necessitated due to a hockey game at Value City Arena, Ohio State’s usual home floor. There were no fans in attendance in accordance with Ohio and Franklin County COVID-19 protocols.