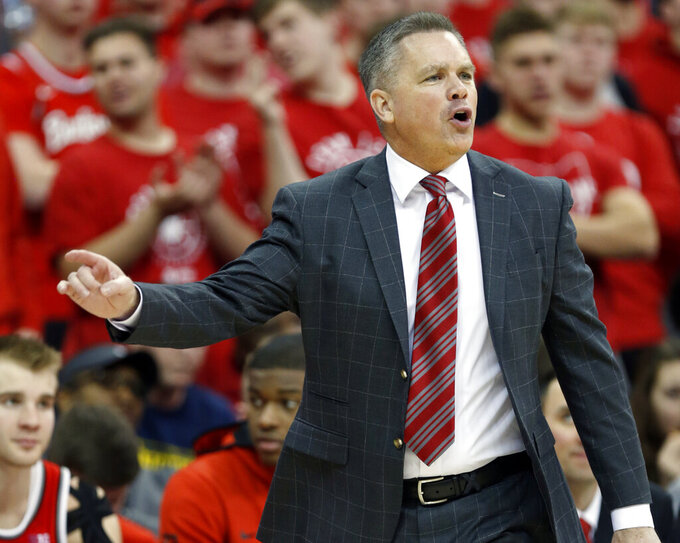 FILE - In this March 1, 2020, file photo, Ohio State coach Chris Holtmann directs his team against Michigan during the second half of an NCAA college basketball game in Columbus, Ohio. Transfer rules have generated a lot of comings and goings in the Ohio State basketball program. Add a preseason practice schedule affected by COVID-19 restrictions, and it’s no wonder coach Chris Holtmann is still trying to figure out where all the pieces will fit. (AP Photo/Paul Vernon, File)

COLUMBUS, Ohio (AP) — Transfers and other factors led to a lot of recent comings and goings in the Ohio State basketball program. With the COVID-19 pandemic affecting preparation for the season, coach Chris Holtmann is still trying to figure out where all the pieces fit.

The glaring problem for No. 23 Ohio State is figuring out how to replace the Wesson brothers, both starters and anchors for the Buckeyes last season. Andre Wesson, a solid defensive player who averaged 9.2 points per game, will be missed — but not as much as younger brother Kaleb, who was one of the better post players in the country.

A 6-foot-9, 255-pound force in the middle, Kaleb Wesson averaged 14 points and 9.3 rebounds in 2019-20 before deciding to enter the NBA draft. Both brothers shot better than 42% from 3-point range last year, tops among the Buckeyes.

“We’re certainly going to look differently,” Holtmann said. “When you look out on the floor, you don’t see anyone with Kaleb’s length and size and physicality, but you do see a lot of guys between 6-4 and 6-8.”

On the positive side for Holtmann, he’s got an experienced backcourt tandem in senior point guard CJ Walker and junior Duane Washington Jr., who was the team’s second-leading scorer last season.

The Buckeyes will rely on them for leadership.

“We talk a lot about it,” Walker said. “We're going to have to be in shape, really conditioned, being leaders on and off the floor. We've just got to take that challenge every day.”

Kyle Young, a 6-8 senior who missed time last year with an ankle injury, is the top returning frontcourt player. E.J. Liddell, a 6-7 forward, showed promise as an inside banger in his freshman season.

Junior guard Musa Jallow missed the entire 2019-20 season with an injury but could make it back this year.

Ohio State is coming off an uneven season. Off to a hot start, the Buckeyes rolled to 11-2 before Christmas but collapsed when Big Ten play began. They were 1-6 between Dec. 29 and Jan. 23, then managed to catch fire again and go on a 9-3 run to finish 21-10. The pandemic ended the season before the conference tournament.

Seth Towns, a graduate transfer from Harvard, will have two seasons of eligibility at Ohio State. The Columbus native, a versatile 6-8 forward, missed the past two seasons with knee injuries after being named Ivy League Player of the Year in 2017-18.

Forward Justice Sueing, a hot-shooting transfer from Cal, may finally get to play after being forced to sit out last season and having foot surgery in January.

Bucknell transfer Jimmy Sotos will provide some depth at guard, and Ohio State has high hopes for freshmen Eugene Brown III and Zed Key. Four-star point guard Meechie Johnson, from the Cleveland suburb of Garfield Heights, announced last week he will graduate early and join the Buckeyes in December. Due to new NCAA rules related to the pandemic, Johnson will be able to play this season and still have four years of eligibility remaining.

Guard D.J. Carton, who left the team midseason last year, transferred to Marquette. Luther Muhammad, one of the Buckeyes’ best defensive players, transferred to Arizona State. Abel Porter, a graduate transfer from Utah State, never got to suit up for Ohio State. The school said he has a non-COVID-related medical issue that ended his playing career.

The pandemic has turned the early season schedule on its head for many teams. Ohio State was to be a participant in the Battle 4 Atlantis in the Bahamas, but that was canceled. Then COVID concerns led Ohio State to pull out of the Crossover Classic in Sioux Falls, South Dakota. The Buckeyes were set to play Nov. 25 in that tournament, but now the opening date is uncertain as they try to fill the hole in the schedule. Ohio State is still slated to host Morehead State on Dec. 2 and Alabama A&M on Dec. 5. The conference schedule is still being worked out.