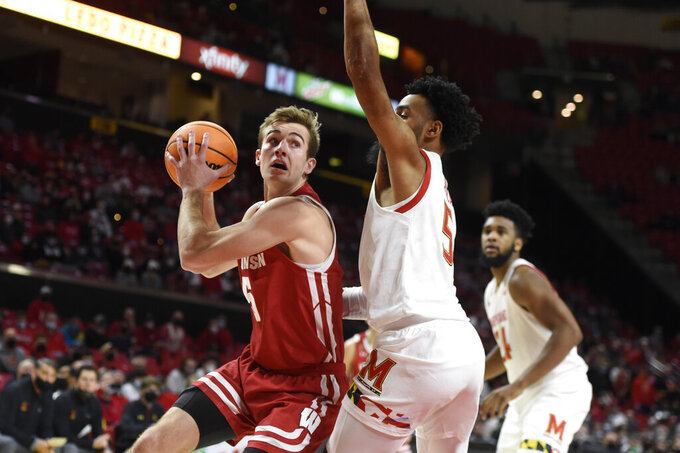 The Badgers (13-2, 4-1 Big Ten) extended their winning streak to five despite squandering a 21-point lead against the struggling Terrapins.

“We went away from what had gotten us the lead, which was throwing the ball in the paint,” Wisconsin coach Greg Gard said. “We went away from touching the post, and the post had been so good to us in a variety of ways and we out of that and they realized it. Once you get out of it, it’s hard to get back into it.”

Wahl ensured it would happen. The junior, whose previous career best was 18 points on two occasions earlier this season, scored 12 points in the second half after sitting the final 4:07 before halftime with two fouls.

At one point, he scored 10 of 16 points for the Badgers as neither team could extend a lead beyond a possession for much of the second half.

It was the first time this season Wahl led the Badgers in scoring.

“He was obviously the best player on the floor tonight,” said Davis, who began the day ranked fourth nationally with 22.6 points per game.

Steven Crowl gave Wisconsin the lead for good with a 3-pointer with 4:03 remaining to make it 60-57. Ayala cut the deficit to 70-69 on a 3-pointer with 4.2 seconds remaining. Brad Davison missed two free throws with 3.9 seconds left --- the second one intentionally --- but Ayala’s heave at the buzzer was offline as the Badgers escaped.

The Badgers appeared on their way to a comfortable victory when Chucky Hepburn’s 3-pointer pushed their advantage to 29-8 with 8:21 left in the first half. But Maryland ripped off the next 15 points, and Wisconsin took a 33-26 lead into the break.

Maryland’s push continued in the second half, and Ayala’s consecutive 3-pointers gave the Terps their first lead at 36-35.

“No moral victories, but to play the way we did after being down 21 to one of the better teams in the country, I feel like we’re close to turning the corner,” Maryland interim coach Danny Manning said.

Wisconsin: No team is going to be at its best every night, and the Badgers certainly weren’t sharp in the middle of the game. But they recovered from scoring just six points in a span of 13:40 to squeak out their third victory in seven days.

Maryland: The Terps resumed conference play by losing three times in seven days, but showed feistiness Thursday at Illinois and Sunday against Wisconsin by erasing big early leads. Maryland probably isn’t headed for the postseason, but it remains capable of hassling good teams even in a down year.

The Badgers were already due a jump in the rankings after winning Monday at No. 3 Purdue and following up with an 87-78 defeat of Iowa. This victory ensures Wisconsin’s leap isn’t muted.

Davison wryly observed Gard’s order during a timeout to miss the last of his two foul shots did nothing to help his free throw percentage, but it was still the right call with a one-point lead.

“As someone who wants to be a coach, absolutely I think it’s the best play,” Davison said. “Even if you make both, you give them three seconds to go the full length of the floor. You can catch the ball at halfcourt and get two or three dribbles to get a good look. If you miss it, you’re getting the rebound underneath the hoop and you’re still shooting over a halfcourt shot.”

Wisconsin will attempt to avenge its lone Big Ten loss of the season Thursday when it welcomes No. 13 Ohio State to Madison.

Maryland will try to avoid a season sweep Wednesday when it visits Northwestern.