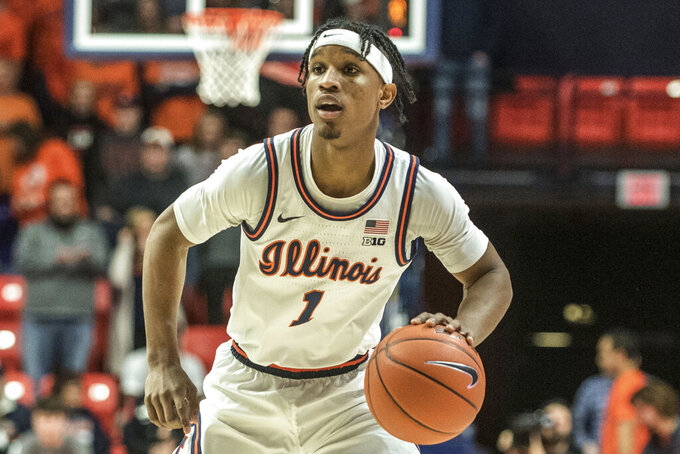 Illinois' Trent Frazier (1) works the ball vs Northwestern in the first half of an NCAA college basketball game, Saturday, Jan. 18, 2020, in Champaign, Ill. (AP Photo/Holly Hart) 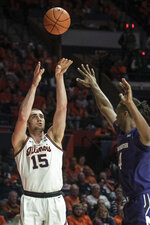 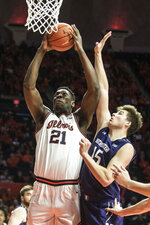 CHAMPAIGN, Ill, (AP) — As Illinois coach Brad Underwood watched Northwestern play his Illini down to the wire, he couldn’t help but feel he was watching his own team from a year ago.

Trent Frazier scored 16 points, including hitting four 3-pointers, and Underwood’s No. 24 Illinois hung on for a 75-71 win over the Wildcats on Saturday.

“Northwestern is young but, boy, are they talented,” Underwood said. “It was very much like watching our team from last year.”

“It feels good to be 5-2 and second in the Big Ten,” Dosunmu said. “But we have more work to do, and we start it at tomorrow’s practice.”

Illinois led by four at the half and was up 69-60 with 3:50 remaining. Northwestern went on an 8-2 run capped by A.J. Turner’s 3-pointer with 44 seconds left. Dosunmu answered with a jumper 26 seconds later. Miller Kopp hit a 3-pointer with 7 seconds remaining to get Northwestern within 73-71. Dosunmu then hit two free throws a second later to seal the game.

“You want to stop Ayo? Go ahead,” Underwood said.

“I just came up big,” Dosunmu said of his late-game jumper. “Got to my pull up and it came up clean.”

Frazier was 3 of 5 from the field in the first half, all three from beyond the 3-point line, He also hit two free throws and led all scorers with 11 points before halftime.

Northwestern coach Chris Collins has seen his share of tough losses this year.

“Really rough,” he said, “I was proud of our effort, though. We didn’t drive down from Chicago in a snowstorm last night to be a sacrificial lamb.”

Collins said the Illinois loss is both a letdown and a credit to his young team.

“It’s my job to turn it into a positive,” he said, “We played well, we just came up a couple of possessions short.”

Frazier logged his sixth consecutive game without a turnover.

“That’s unbelievable,” Bezhanishvili said. “He’s a leader on this team and just an elite guard, not just in the conference but in the country.”

Dosunmu agreed. “Trent makes the right decisions and the right reads,” he said. “He doesn’t force it.”

Underwood was also glad to see Frazier be more offensive minded after mainly playing his trademark defense in the past several games.

“Everyone knows Trent is capable of a 30-point half,” Underwood said. “He’s still evolving, but boy do we need his offense. There are no upsets in this league. It’s tough to win in the Big Ten,”

Bezhanishvili slammed in a one-handed dunk with 8:09 left in the game to put Illinois up 60-55. Young answered with a 3-pointer for Northwestern to pull to within two points. On the next possession, the crowd of 15,500 leapt to its feet as Cockburn slammed home a dunk to put Illinois up by four with a 7:20 left.

Northwestern has had rough go in the conference, but the Wildcats acquitted themselves well in a tough environment against a much taller and athletic Illinois squad.

Illinois did as expected, handling its in-state conference rival despite a well-fought first half.

Northwestern: Things get no easier for the Wildcats, who host No. 17 Maryland on Tuesday.

Illinois: Begins a two-game road trip, first against Purdue on Tuesday before visiting No. 19 Michigan on Jan. 25.

By Dave Skretta an hour ago
By Hank Kurz Jr. 3 hrs ago
14 hrs ago
By Anthony Anderson 15 hrs ago
By Michael Marot 15 hrs ago