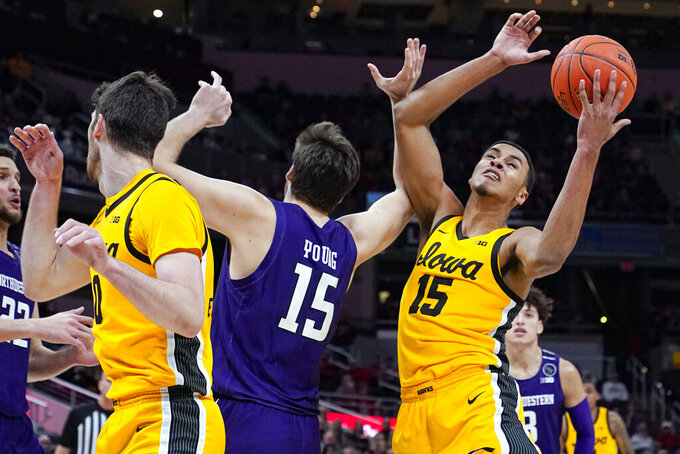 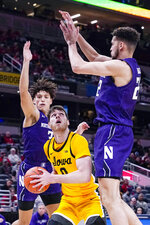 Keegan Murray scored 26 points, and the Hawkeyes broke Big Ten Tournament records for scoring, field goals and 3-pointers while running away from Northwestern for a 112-76 victory Thursday.

Murray was 11 of 16 from the field and grabbed eight rebounds. Jordan Bohannon added 17 points in the most prolific offensive showcase since the tourney began in 1998 — and it wasn’t even close.

The Hawkeyes broke Maryland’s single-game tournament record of 97 points, set in 2016. Their 43 field goals were six more than Ohio State's mark of 37 in 2016. Both records fell on Josh Ogundele’s putback with 4:33 to go.

The offensive show allowed Iowa to rest its starters for the final 7 1/2 minutes as it tries to win four games in four days for its third conference tourney crown.

“Every time we had a defensive breakdown, they made us pay," Northwestern coach Chris Collins said. “I don't how anyone beats them when they're playing like that and they've been playing like that the last couple of weeks."

The Wildcats (15-16) were led by Ryan Young with 14 points and Boo Buie with 12. They had won two in a row, including a 71-69 victory over Nebraska in the first round of the tournament on Wednesday.

But Northwestern never had a chance against Iowa.

The Hawkeyes opened the game on a 17-4 run, extended the margin to 50-26 late in the first half and headed to the locker room with a 64-31 cushion.

The Wildcats couldn't get closer than 26 in the second half — until Iowa pulled the last of its starters with 7 1/2 minutes to play — and failed to reach the Big Ten quarterfinals for the fifth consecutive year.

“Early on, I felt like we were moving the ball really well," Murray said. “We've been getting stops on defense the last few games and so we've been really good getting out and running.”

Northwestern: The Wildcats seem like they are running in place as a program. With three senior starters unlikely to return next season, Collins has plenty of work to do.

Iowa: The Hawkeyes have done more than enough to get into the NCAA Tournament. If they want to improve their seeding, though, a deep run in Indianapolis would help. McCaffery's squad made a strong statement Thursday.

A win over the Big Ten's No. 12 seed won't do much to strengthen Iowa's résumé or its hold on a spot in the Top 25. Reaching Saturday's semifinals might.

Northwestern: Pete Nance scored 11 points and Robbie Beran had 10. ... The Wildcats were outrebounded 45-18.

Northwestern: The Wildcats face a long offseason to contemplate how to right the program.