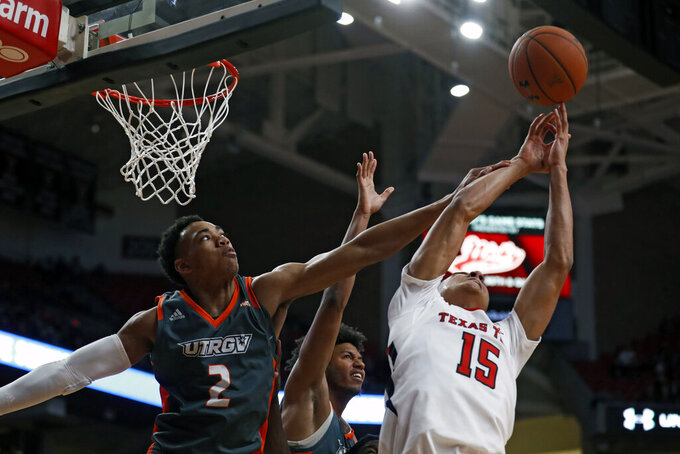 LUBBOCK, Texas (AP) — Freshman Jahmi'us Ramsey didn't take long finding a way to get involved after missing four games for No. 24 Texas Tech with a hamstring injury, scoring on an alley-oop dunk within the first three minutes.

Ramsey didn't score again in the first half but wound up with 15 points, and the Red Raiders overcame another sluggish start in a 68-58 victory over Texas-Rio Grande Valley on Saturday.

“I saw him being aggressive,” coach Chris Beard said after Ramsey played 31 minutes, three more than his average from the first six games. “He didn’t look like a guy that came out today and was trying to fit in again. That was the whole idea.

"Think a lot of times people come back from time off, injury, suspension, whatever, it takes you awhile. It was an objective for our whole team, not just Ramsey, for him to get in there.”

Fellow freshman Terrence Shannon had his fourth straight double-figure game with 14 points as the Red Raiders (8-3) extended their nonconference home winning streak to 53 games. It's the second-longest active streak in the nation.

Ramsey, the team's leading scorer, was just 2 of 7 from 3-point range after his layoff but made four of five shots from inside the arc.

Texas Tech won its third straight game, a streak that started when the Red Raiders stopped a three-game slide with school's first-ever win over a No. 1 team, against Louisville at Madison Square Garden.

For the second straight game, the Red Raiders trailed at halftime as heavy favorites. Texas-Rio Grande Valley led 27-26 after a dunk by Sean Rhea in the final minute.

Freshman Kevin McCullar scored the first five points on an 11-0 run that broke a 34-34 tie and put Texas Tech in front for good. McCullar tied his career high with 10 points.

Davide Moretti, the only returning starter from the first Texas Tech team to reach the NCAA championship game, hit his only 3-pointer while scoring the final five points in the run. The junior from Italy finished with seven points.

Texas-Rio Grande Valley: The Vaqueros had a second consecutive solid showing on a difficult five-game road trip that started with a 31-point loss to Creighton. Texas Tech led by as many as 16 points in the second half, but the final margin was the same as a 92-82 loss to Omaha in the previous game. The Vaqueros are 0-7 all-time against the Red Raiders.

Texas Tech: The Red Raiders are having a hard time shaking a 3-point shooting slump, finishing at 25% (4 of 16) after missing all eight attempts in the first half. Texas Tech has been under 30% in five of the past six games, and shot just 33% in the other one.

Chris Clarke, the graduate transfer from Virginia Tech, matched Holyfield with eight points and nine rebounds after going to Beard and offering to return to the bench with Ramsey ready to return.

“It’s one of the most unselfish acts I’ve had in ‘X’ years of coaching,” Beard said. “Chris Clarke reached out to me personally and said, ‘look, I just want to win. I’d really prefer to come off the bench. I think this is what our team needs.' That's team basketball. That’s how you win.”

The Red Raiders are a win away from ensuring the start Big 12 play in the top 25 after losing to Virginia in overtime in the title game last season. Texas Tech shared the regular-season championship with Kansas State last season, ending Kansas' 14-year streak of Big 12 regular-season titles.

Both teams play their final games before their conference openers. Texas-Rio Grande Valley is at Oklahoma on Dec. 30 before the Western Athletic Conference opener Jan. 2 at California Baptist. Texas Tech plays Cal State Bakersfield at home on Dec. 29 before starting Big 12 play Jan. 4 against Oklahoma State, also at home.