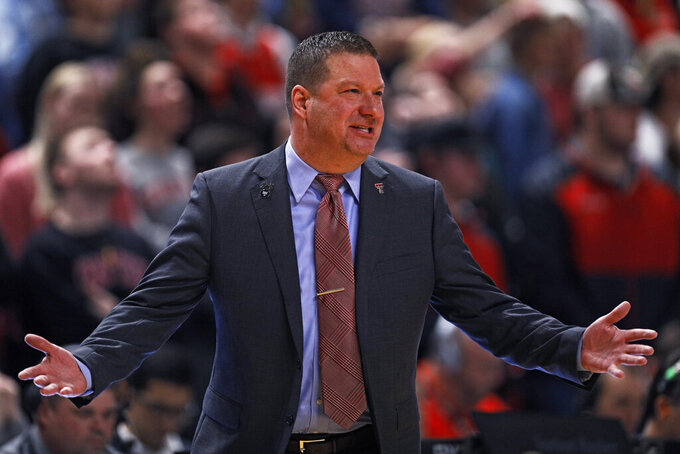 Texas Tech coach Chris Beard yells to the referees during the first half of an NCAA college basketball game against TCU, Monday, Feb. 10, 2020, in Lubbock, Texas. (AP Photo/Brad Tollefson)

LUBBOCK, Texas (AP) — Davide Moretti made a 3-pointer from the right corner on Texas Tech's first shot after TCU opened the game with a turnover.

The Horned Frogs then had another turnover on its second possession, still in the first minute, leading to TJ Holyfield's layup after three quick passes by Tech.

That quickly set the tone for the No. 24 Red Raiders, who returned to the Top 25 with an 88-42 win Monday night, their largest margin of victory ever in a Big 12 game. That also avenged a double-digit loss at TCU three weeks ago.

“We definitely talked about that," Moretti said of that previous game against the Frogs. “We own that since we didn't play our best down there."

Moretti and Jahmi’us Ramsey each scored 17 points and the Red Raiders (16-8, 7-4 Big 12) made a season-high 13 3-pointers. Moretti and Kyler Edwards, who finished with 14 points, were both 4-of-6 shooting on 3's. Holyfield and Kevin McCullar each had 10 points.

"Completely different tale than the last time we played them. We got everything we deserved,” Frogs coach Jamie Dixon said. “Obviously the turnovers, something we emphasized in our one day to get ready, and we came out and turned it over. ... We built our hole and couldn't respond, couldn't step out of it.”

Texas Tech moved back into the Top 25 earlier Monday following a two-week absence. They have won three in a row since three losses in their previous four games.

TCU (13-11, 4-7) had six turnovers, three by standout guard Desmond Bane, in the first 3:10 of the game. Those miscues led to 10 Texas Tech points, and the Frogs were already down 11-2 by then. They had a stretch in the second half when they went more than 10 minutes without making a field goal.

“Tonight we played, in times of the game, about as well as we can play. Our offense took care of the ball tonight, and our defense was forcing turnovers and making it hard on the opponents," Red Raiders coach Chris Beard said. “Tonight was a game for us to try to play better against an opponent that beat us a few weeks ago, so I thought the guys responded to the opportunity we had tonight.”

Jaire Grayer had 10 points for the Horned Frogs, who have lost six in a row since that 65-54 home win over Texas Tech. They have lost eight of nine overall since starting 3-0 in Big 12 play.

“Certainly an easier game to play when shots are going in but I thought tonight we got a lot of open shots, which it’s a credit to our passing,” Beard said. “Guys made a lot of unselfish plays."

Edwards, Holyfield and Moretti were already in double figures by halftime, when Tech led 45-20.

“I think Texas Tech saw a team that was struggling, been on a losing streak and a team that we had beaten before,” Dixon said. “They had every reason to be excited about playing us.”

Texas Tech starting guard Terrence Shannon left the game with just over two minutes left in the first half., soon after he fell down to the floor after some contact on the defensive end. Beard said there were some early signs of a concussion and that doctors held the 6-foot-6 freshman out of the rest of the game.

TCU: The Horned Frogs played their third game in six days and dropped to 1-6 on the road. They have been held to fewer than 60 points in four consecutive games, and this was the second game in a row to be stuck in the 40s. ... Their only field goal attempt in that opening stretch with six turnovers was a layup by 6-foot-11 center Kevin Samuel, two days after he was scoreless in a 60-46 home loss to No. 3 Kansas. Samuel finished with four points, but did have seven rebounds.

Texas Tech: Two days after falling behind by 16 points at Texas before coming back to win, the Red Raiders led by 16 midway through the first half against TCU and kept building on that lead. They led by as many as 27 before halftime.

TCU is home against Kansas State.

Texas Tech plays three of its next four games on the road, starting Saturday at Oklahoma State.