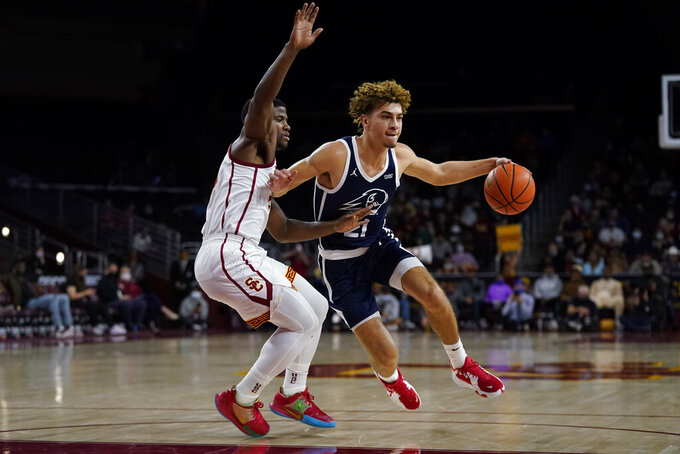 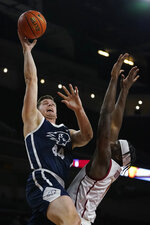 LOS ANGELES (AP) — Boogie Ellis scored 19 points and No. 24 USC opened a double-digit lead less than three minutes into the game, rolling to a 98-71 victory over Dixie State on Monday night.

Max Agbonkpolo scored a career-high 17 points and Isaiah Mobley added 14 for the Trojans (4-0). Chevez Goodwin had 12 points and 11 rebounds.

Ellis, in his first season at USC after two at Memphis, has averaged 17 points over the first four games.

“These pieces have been together for what feels like forever. So to be able to show it, game by game we’re getting closer together,” Agbonkpolo said. “We’re going to play off each other much more as the season goes on.”

Cameron Gooden and Frank Staine scored 17 each for the Trailblazers (1-4), while Hunter Schofield added 10 points and eight rebounds. Dixie State, which moved to Division I last season, was playing USC for the first time.

The Trojans got off to a fast start in their second home game of the season. A pair of 3-pointers from Ethan Anderson and Mobley gave them a 13-3 lead just 2:54 in, and they increased it to 22-5 less than eight minutes in.

Dixie State held its own through the remainder of the first half, with USC taking a 47-36 advantage into halftime. The Trailblazers were within single digits at 53-44 with 17:50 remaining before USC ran away.

The Trojans pushed their advantage beyond 20 for the first time at 73-51 with 11:24 left on a three-point play by Agbonkpolo.

Dixie State shot just 31.6% from the field and was outrebounded 52-38. The Trailblazers did have 12 offensive rebounds to 11 for the Trojans and committed only seven turnovers.

“We tried everything we could; we tried pressure, we tried zone, we tried everything,” Dixie State coach Jon Judkins said. “We made a run and had the ball in the second half down nine twice. There are definitely some things we learned and that’s why we wanted to play them. We know how good they are.”

Dixie State: It was a challenging visit to the Los Angeles area for the Trailblazers, who lost two games at Cal State Northridge in the Good Sam Empire Classic before falling to the Trojans. A run of six consecutive home games is up next, with the program’s second season in the WAC set to start Dec. 30.

USC: Ellis is settling in nicely as a top scoring threat. The AAC’s co-Sixth Man of the Year last season has flourished in a starting role as USC looks to replace the scoring output of standouts Evan Mobley and Tahj Eaddy.

USC: Opens the Wooden Legacy in Anaheim on Thursday vs. Saint Joseph’s.