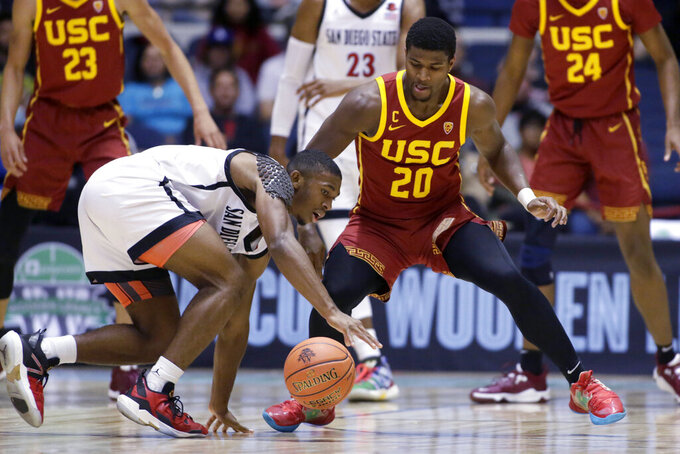 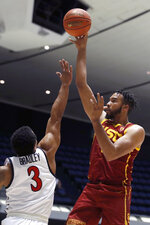 ANAHEIM, Calif. (AP) — Isaiah Mobley scored 18 points and had 12 rebounds and No. 24 USC’s stifling defense earned it a 58-43 victory over San Diego State on Friday night in the title game of the Paycom Wooden Legacy.

Drew Peterson scored 16 points and Chevez Goodwin added 10 as the Trojans improved to 6-0. They held the Aztecs to 32.1% shooting and just 15 points in the first half.

“I feel like I just played off the flow of the game,” said Mobley, who was named tournament MVP. “I feel like they had smaller defenders on me so I knew I could get it down low. My teammates believe in me, the coaches as well, to just to put me in a position to score. It wasn’t pretty, but we got it done.”

Trey Pulliam scored 11 points, while Lamont Butler and Aguek Arop each had nine for San Diego State (4-2), which was held to its lowest-scoring opening half since 14 points against Air Force on Jan. 12, 2019.

The Aztecs had just one first-half assist on six made baskets, and seven total assists in the game. San Diego State also lost the rebounding battle, with USC pulling down 49 to SDSU’s 33.

Peterson not only was 6 of 10 from the field for the Trojans, he helped hold SDSU leading scorer Matt Bradley to three points on 1-of-7 shooting.

“We used to spell Drew R-E-W. There was no D in his game so we called him Rew Peterson,” USC coach Andy Enfield joked, earning a chuckle from Peterson, who was sitting next to him. “Now we call him Drew because ... he’s learned how to use his length, he’s learned how to anticipate drives, close down and challenge shots.”

Both teams struggled to score before halftime, but the Trojans went on an 8-0 run to lead 22-15 at the break. San Diego State shot just 23.1% from the field in the first half, while USC shot 33.3%.

The Trojans started the second half on a 10-2 run to take a 32-17 lead with 15:56 remaining after a turnaround jumper from Peterson. The Aztecs didn’t reach the 20-point mark until a 3-pointer by Arop with 15:03 to play.

Boogie Ellis, who entered leading USC in scoring at 17.0 points per game, was held to just two points on 1-of-6 shooting.

The 6-0 start is the Trojans’ best since the 2017-18 team opened the season 14-0 and eventually advanced to the second round of the NCAA tournament after winning in the play-in round.

San Diego State: A three-game winning streak against Top 25 teams came to an end for the Aztecs, who face Long Beach State at home Tuesday before a trip to Ann Arbor to face No. 20 Michigan on Dec. 4. … San Diego State had a 10-2 record in neutral-site games before losing Friday.

USC: The Trojans delivered consecutive victories over Saint Joseph’s and San Diego State in their last tune-up games before their Pac-12 Conference opener at home against Utah on Wednesday.

USC: At home against Utah on Wednesday.