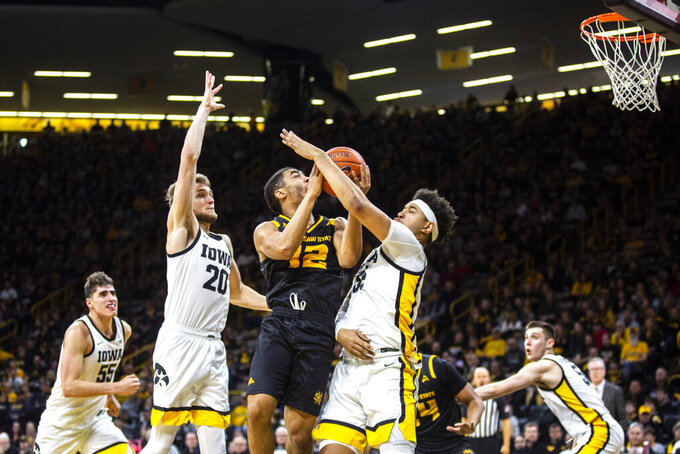 He knew that wasn’t going to happen with the Hawkeyes in Sunday’s game against Kennesaw State.

The No. 25 Hawkeyes were sharp in a 93-51 home win to close the non-conference portion of their schedule.

Luka Garza scored 23 points and Ryan Kriener added a career-high 20 for the Hawkeyes (10-3). Kriener made all nine of his shots, while Garza was 9-of-11.

Getting them the ball was a big part of Iowa’s game plan, and McCaffery knew his team understood.

“We knew we had to get out here and take care of business,” Garza said. “I thought we did a good job of that, executing (the game plan). We all came back in shape. We really pushed each other every day in practice. For this game, we were focused, taking care of this.”

“This is probably the best shape this team has been in as a whole since I’ve been here coming off the winter break,” Kriener said. “That speaks a lot to our commitment. As a senior, that’s one of those little things that means a lot to me.”

The Hawkeyes had season highs with 14 steals and 27 assists. Iowa had 34 points off 24 Kennesaw State turnovers, and had 64 points in the paint, compared to just 22 for the Owls.

Kriener, who came into the game averaging 6.3 points, scored in double figures for the second time this season. His previous career high was 15 on three occasions, the last time in a game last season against Michigan.

Forward Cordell Pemsl went 4-of-6 from the field, so the three frontcourt players combined to go 22-of-26.

Terrell Burden had 14 points and Ugo Obineke had 13 to lead Kennesaw State.

Iowa: The Hawkeyes played their first home game in 20 days, and after a stretch of seven games that included three neutral-court games and three road games, needed an easy one.

That is why McCaffery gave them three days off after a Dec. 21 win over Cincinnati in Chicago.

“They deserved a break after the tough stretch we had prior to Christmas,” McCaffery said.

Kennesaw State: The Owls wrapped up a non-conference schedule that included eight road games. They have back-to-back home games next.

Iowa: The Hawkeyes got into the rankings last week and should stay with this win, although the Owls weren't much of a challenge.

Iowa: The Hawkeyes get back into the Big Ten schedule with a game against Penn State at the Palestra in Philadelphia on Jan. 4. Iowa went 1-1 in two conference games in early December, losing at Michigan and defeating Minnesota at home.