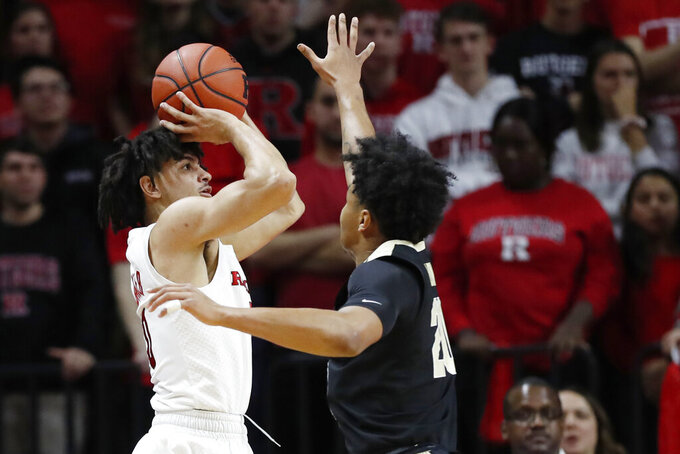 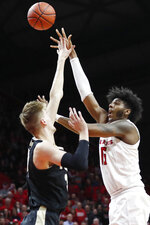 PISCATAWAY, NJ (AP) — Steve Pikiell will get a reprieve from the emails about his team's poor foul shooting from disgruntled fans.

Caleb McConnell was a perfect 12-for-12 from the free throw line en route to 16 points, as No. 25 Rutgers nearly blew a 17-point lead before holding off Purdue, 70-63 on Tuesday night.

“I love the way we finished the game from the foul line, so I won't be getting emails tomorrow about free throw shooting so that's a good thing for me and I look forward to that,” said Pikiell, whose team is shooting 64% from the foul line this season. “But these guys made big plays down the stretch you have to do that in this league. Every game is like that and you see it every time you turn on the Big Ten Network.”

McConnell hit critical free throws down the stretch, without feeling the anxiety mounting as Rutgers’ lead was dissipating.

“If you work on it then there's not there's really no pressure, you know I'm saying so it's all about just repetition and.” McConnell said. “And that's what I do, just make shots.”

Haarms would foul out on the ensuing possession, and McConnell would hit a pair of free throws to put Rutgers up 64-59 with just under two to play, but Eric Hunter Jr. would make a layup with half a minute to go to make it 64-61.

It’s the closest Purdue would get.

“The most important thing is that we felt like every time they made a little bit of a run we were right there and get one back on them,” Baker said. “So just felt good to know that we can take a punch right back.”

Purdue jumped out to an early 5-2 lead, before Rutgers goes on a 11-0 run, capped off by a Montez Mathis fast break layup to take a 13-5 lead at 15:11. Geo Baker hit a three pointer off a Purdue turnover midway through the half to make it 24-13. The Scarlet Knights would lead by as many as 16 in the half before taking a 39-27 lead into half.

Proctor led Purdue with 19 points on while Trevion Williams had 17 points and 13 rebounds.

“You don't get rewarded for having a good fight,” Purdue coach Matt Painter said. “We keep putting ourselves into a hole. It's one thing being down in half, but when you have 11 turnovers. You have to play better.”

Rutgers payed tribute to Kobe Bryant, who died in a helicopter crash Sunday, wearing warmup jersey’s with Kobe’s face on the front and number’s 8 and 24 on the back. A moment of silence was held for Bryant, his daughter Gianna and seven others killed in the accident. Ron Harper Jr., whose father Ron played with Bryant, winning back-to-back Championships in 2001 and ’02, was particularly emotionally, wiping away tears.

Purdue: A season that started in the AP Top 25 at No. 23 and it’s been a rough slate losing for the Boilermakers five of the last seven conference games. Unable to get the conference record back to .500, they have to win their next game to stay above .500 overall.

Purdue: At Northwestern on Saturday.