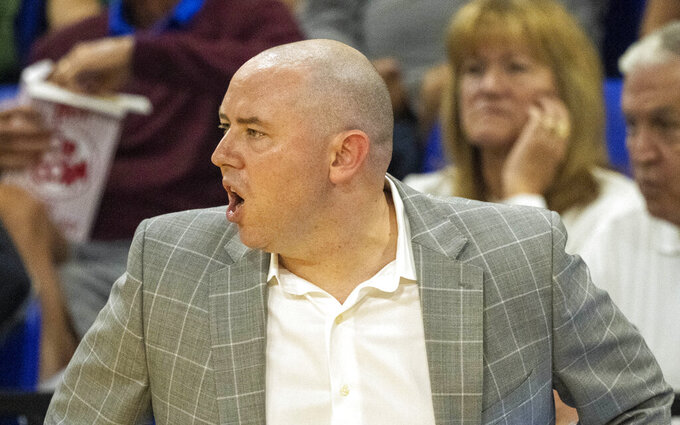 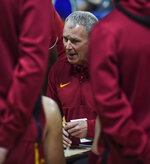 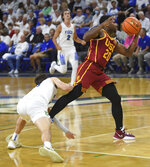 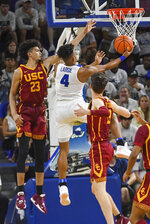 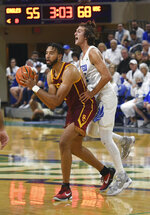 And Andy Enfield walked out happy — although this time, he did so from the visiting side of the court.

Chevez Goodwin scored 20 points, Boogie Ellis added 18 and No. 25 Southern California defeated Florida Gulf Coast 78-61 on Tuesday night in the return of Enfield to the school he led to the “Dunk City” moniker in the 2013 NCAA tournament.

“There has to be loyalty at some point in what you're trying to do," Enfield said. “Everybody wants to win, but I thought this was a great opportunity to come back. I knew the environment would be like this. ... I was just hoping we were good enough that the fans would want to come watch us."

Cyrus Largie scored 20 points for FGCU (1-2). The Eagles' two losses have come to a Loyola Chicago team that went to the Sweet 16 last season and an USC team that Enfield took to the Elite Eight last March.

“We don’t do moral victories in this program ... but when this group has played together as much as coach Enfield’s group, we’ve got a chance to be a very good basketball team,” FGCU coach Michael Fly said.

Enfield spent two seasons at FGCU, leaving for USC after the 2013 run by the Eagles to the Sweet 16 — the first No. 15 seed to ever get that deep into the tournament. The last two days have been a celebration of that team, with a school Hall of Fame enshrinement on Monday night followed by Enfield’s return to Alico Arena on Tuesday.

This time, though, there would be no Cinderella story.

That said, there was a clear big-game vibe: a national TV audience was watching, the FGCU student section was jammed more than an hour before tip-off and seats were filled all the way to the back row of the intimate gym that holds about 4,600.

“It was great having everybody," FGCU center Kevin Samuel said.

FGCU got the Atlantic Sun’s automatic bid to the 2013 NCAA tournament by winning the conference title, then was seeded No. 15 in the South region. The Eagles drew second-seeded Georgetown in the first round.

FGCU’s high-flying, alley-ooping ways became the story of the tournament. The Eagles beat Georgetown 78-68, then ousted San Diego State 81-71 in the second round before falling to Florida in the regional semifinals. A little school with no real national acclaim had made the Sweet 16. It’s been called Dunk City ever since.

And if the outcome wasn’t what FGCU wanted, it at least came with a trip down memory lane.

Fly was an assistant under Enfield at FGCU and remembers being so nervous before his first game on the staff that he mistakenly grabbed the head coach’s jacket — which was cut a little smaller, and cost quite a bit more, than his own coat for that night.

“He made sure to point out to me that he hoped the players weren’t quite as nervous as I was,” Fly said. “The moral of the story, I think, is I guess on some level I knew coach Enfield’s shoes would be really hard to fill. So, I tried his jacket on.”

FGCU showed its potential early that season, beating Miami 63-51 in November 2012. Until Tuesday, no school from any of college basketball’s major conferences — the SEC, ACC, Pac-12, Big 12, Big East or Big Ten — had visited Dunk City since.

“I think him hiring the staff he did, bringing in the players he did, and allowing us to be ourselves, I think that’s the biggest thing that’s missed nowadays — coaches allowing their players to be themselves, be creative, allowing us to have the fun that we were allowed to have,” Comer said.

In the end Tuesday, Enfield’s team was the one having fun again. That couldn’t have been a surprise — a Pac-12 school, in the AP Top 25, against a mid-major school that typically doesn’t get the chance to face ranked opponents.

Enfield took a look around the facility a couple hours before tip-off, savoring every bit of the visit.

“This is an incredible place,” Enfield said.

USC: The Trojans controlled points in the paint, leading 44-26 in that department and 22-14 in fast-break points. USC shot 49% for the game.

FGCU: The Eagles were scheduled to play host to USC last season, a game that couldn’t be played because of scheduling issues caused by the pandemic. ... FGCU is now 1-13 against ranked opponents since joining Division I.