No. 3 Kansas ready to focus on season rather than NCAA fears 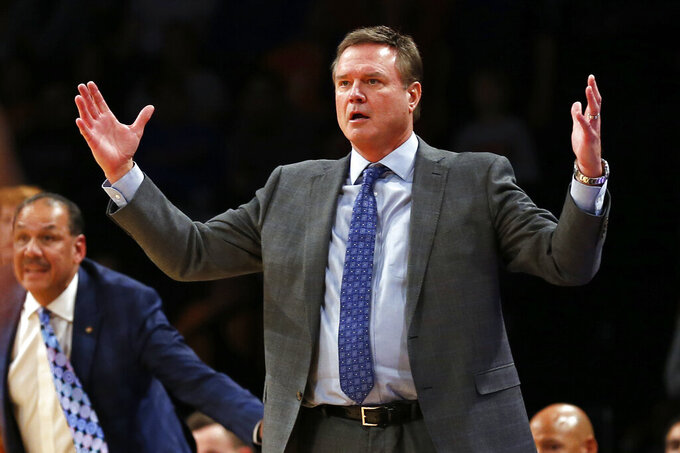 FILE - In this Nov. 23, 2018, file photo, Kansas head coach Bill Self reacts against Tennessee during the second half of an NCAA college basketball game in the NIT Season Tip-Off tournament in New York. There has been more attention on Kansas basketball over the past six months in court rooms than on basketball courts, and Self and the rest of the No. 3 Jayhawks are ready for that to change. (AP Photo/Adam Hunger, File)

LAWRENCE, Kan. (AP) — There has been more attention on Kansas basketball over the past six months in court rooms than on basketball courts, and coach Bill Self and the rest of the No. 3 Jayhawks are ready for that to change.

The season is on the horizon. The focus can get back on the game.

"My concern with this team is preparing them to have the best season we can possibly have and play as deep into March as we possibly can," said Self, whose program received a notice of allegations from the NCAA last month that detailed potentially serious violations within the storied program.

Among them are recruiting violations that surfaced in the trials of Adidas executives following an FBI probe into college basketball corruption, and an accusation of lack of institutional control.

"There is nobody on our team that is directly impacted by these allegations," said Self, who along with school administrators vowed to fight the NCAA findings. "There'll be potential distractions out there because they will be asked the same questions all year long and we've talked about that. That'll make us tougher and harder and more together than we've ever been."

That's a scary thought for the Big 12 and the rest of college basketball.

That's because the Jayhawks, whose string of 14 straight conference titles ended with a thud last season, may have their deepest and most talented team since winning the 2008 national title.

Devon Dotson returns as one of the league's premier point guards after testing the NBA waters, giving Kansas a veteran court general. Iowa transfer Isaiah Moss will join him in the backcourt to give the Jayhawks the outside shooting they lacked last season, and sophomore guard Ochai Agbaji and junior guard Marcus Garret provide length, experience and athleticism.

Down low, the Jayhawks have arguably the best collection of big men in the nation.

Seven-footer Udoka Azubuike is finally healthy after a string of injuries. Silvio De Sousa, whose name surfaced in the Adidas scandal, was declared ineligible for last season and this season before he won his appeal to play this fall. And sophomore big man David McCormack played like a star down the stretch as a freshman, giving Kansas another 6-foot-10 behemoth in the paint.

"''When we came in here at the beginning of summer, guys were coming in every day with the attitude to push each other and make each other better. So I think that motivated us," Agbaji said. "We come on the court, we practice every day, we work hard and do stuff that we control."

Yes, at long last, the emphasis at Kansas is on everything happening on the court.

Not the stuff that is happening in the courts.

Even though his name was tied up in the Adidas scandal, the Jayhawks are confident the redshirt sophomore is in the clear now. The energetic 6-9 rebounder is expected to start alongside Azubuike and give Self a pair of twin towers in the paint to run his preferred inside-outside offense.

"I missed a lot," Se Sousa said, "and right now I'm like, 'Wow, I get to get back on the court and play the game I love. So I'm super motivated. I'm doing whatever I can to help the team."

Rarely does a senior forward who has played meaningful minutes since his freshman season elect to redshirt, but Mitch Lightfoot could do precisely that. The Jayhawks are so loaded in the paint that the 6-8 forward might not get on the floor, making redshirting an attractive option.

"That's something that we have no decided yet," he said. "We have a lot of potential here. Just going to focus on the right now and make that decision when the time comes around."

The Jayhawks cobbled together a unique but exceptional recruiting class that should provide a lot of depth. Four-star forward Jalen Wilson committed late following his release from Michigan when coach John Beilein left for the NBA. Tristan Enaruna is a 6-9 forward capable of playing every position on the floor. Christian Braun is a sharpshooter who could be the biggest surprise this season.

One freshmen who won't take the floor is Issac McBride, a four-star recruit who left the program a month ago. He has picked the Jayhawks over offers from Auburn, Oklahoma State, Arkansas and others.

As usual, Kansas opens the season with a high-profile matchup in the Champions Classic, this time against No. 4 Duke at Madison Square Garden in New York on Nov. 5. The Jayhawks are also in the Maui Invitational and have nonconference games against Colorado, at Villanova and Stanford and against Tennessee.