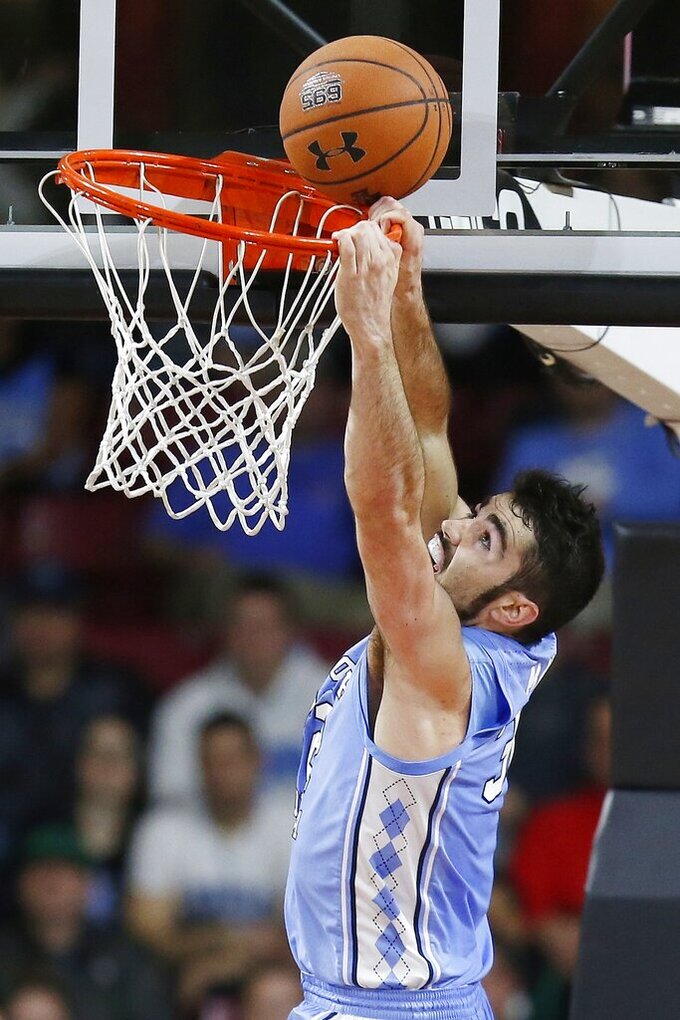 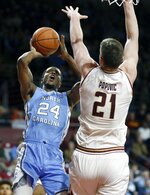 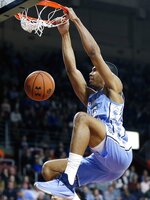 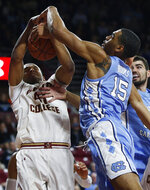 BOSTON (AP) — North Carolina forward Luke Maye grabbed a career-high 20 rebounds in an easy victory over Boston College, and then he was off in transition.

Quickly turning his attention to the No. 3 Tar Heels' regular season finale against archrival Duke, Maye said of Saturday night's game with the Atlantic Coast Conference title at stake: "It's huge for us."

"We wanted to put ourselves in a position to win it," he said after Carolina beat BC 79-66 on Tuesday to set up a showdown with the Blue Devils in Chapel Hill. "And we have that opportunity."

Maye scored 17 and Cameron Johnson had 22 points and 12 rebounds for the Tar Heels (25-5, 15-2 ACC), who won their sixth straight game and went unbeaten on the road in the conference for the first time since it began playing an 18-game schedule in 2012-13.

It was also Carolina's first season with 15 ACC wins. No. 2 Virginia is also 15-2 in the conference, with its finale against Louisville.

Next up for the Tar Heels: fourth-ranked Duke, which escaped with a 71-70 victory over Wake Forest on Tuesday — again without Zion Williamson. Blue Devils coach Mike Krzyzewski said afterward he didn't expect Williamson, who sprained his knee when his shoe exploded in the previous game against Carolina, to play in the rematch.

Maye said he wants Williamson, who is expected to be the No. 1 overall pick in the NBA draft, "to be as healthy as he can for his future."

"The more you get caught up in that stuff, the worse off you'll be," he said. "And your mental approach will get thrown off. You've got to stay level and be ready to compete under any circumstance."

Ky Bowman scored 23 points with nine rebounds and Nik Popovic scored 20 for Boston College, which has not beaten the Tar Heels in 12 tries since 2010. The Eagles (14-15, 5-12) have lost four of their past five games overall, and eight of their past 11.

The game was tied 16-all before the Tar Heels ran off 12 straight points, holding BC without a basket for more than five minutes. In all, Carolina scored 32 of the last 41 points in the first to head into halftime with a 48-25 lead.

The Tar Heels led by as many as 25 points early in the second half and led 63-42 with 12 minutes left before Bowman hit a 3-pointer and Popovic scored twice from the inside to make it a 14-point game. But Johnson scored in the lane, Carolina scored on back-to-back fast breaks and then Kenny Williams made a layup to open a 22-point lead.

Carolina coach Roy Williams had to turn the bench over to assistant Steve Robinson in his previous trip to Chestnut Hill after feeling dizzy and collapsing in the second half. The coach has been diagnosed with vertigo; he also had a spell in the Saturday's victory against Clemson.

North Carolina: Needs to beat Duke to share the regular-season ACC title; a Blue Devils win would give them a chance to share the title.

Boston College: The Eagles had a chance to play spoiler and ruin the Tar Heels' chance at a No. 1 seed in the NCAA tournament. Instead, BC needs a win in the finale and in the conference tournament to finish .500.

North Carolina: hosts No. 4 Duke in regular-season finale on Saturday.