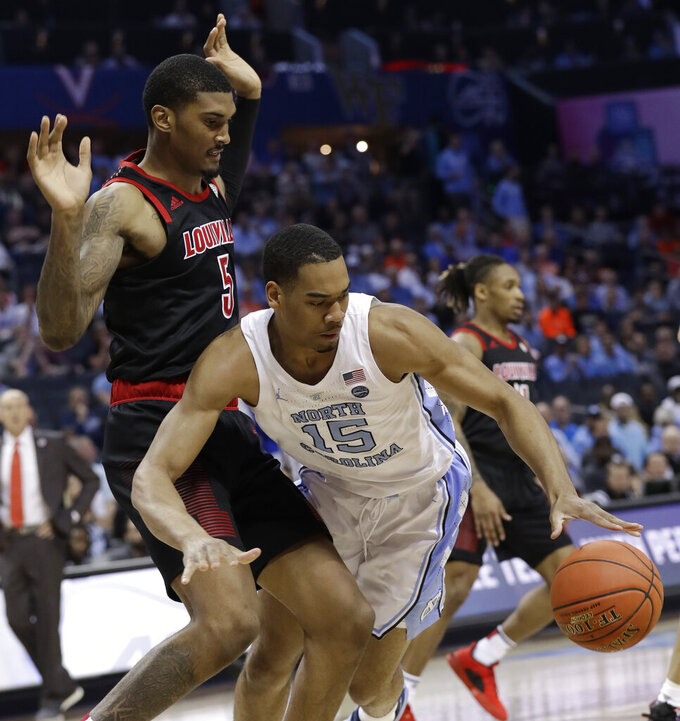 North Carolina's Garrison Brooks (15) is tripped by Louisville's Malik Williams (5) during the first half of an NCAA college basketball game in the Atlantic Coast Conference tournament in Charlotte, N.C., Thursday, March 14, 2019. Brooks was injured on the play but returned to the game. (AP Photo/Chuck Burton) 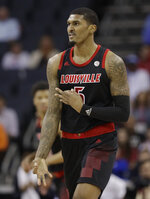 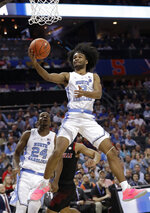 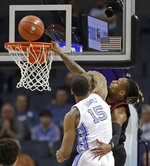 The freshman point guard is learning to walk that fine line for third-ranked North Carolina.

"I'm trying to make the easy play," White said. "I'm trying not to force it."

White's controlled play has the second-seeded Tar Heels in line for a run at their second ACC Tournament championship in four years and a No. 1 seed in the NCAA Tournament.

Maye was stellar as he has been for most of his career with the Tar Heels, taking over on the glass in the second half and scoring from all three levels on offense — attacking the basket, knocking down mid-range jumpers and stroking 3-pointers.

Cameron Johnson chipped in with 14 points — all in the first half — to help the Tar Heels (27-5) extend their winning streak to eight games.

The Cardinals beat North Carolina by 19 on Jan. 12 in Chapel Hill — Williams' worst home loss ever as Tar Heels coach — using their size and length to disrupt shooters and control the glass.

North Carolina had no trouble in the rubber match between the teams.

The Tar Heels built a 45-35 lead at the half behind Johnson and White, who got the basket with ease. But the lead hovered around 10 for most of the second half until the Tar Heels got their transition game going with eight straight points on run outs — including four by Kenny Williams — to stretch the lead to 18 with 6:24 left.

"They are as fast as any team I've coached against," Mack said. "And you talk about it, you talk about it, but talking doesn't prepare you sometimes. And you give those guys credit, they were shot out of a cannon, that ball was up the floor and in such a hurry and got to the rim."

WILLIAMS SHOULD BE FINE

Kenny Williams had a rough outing physically, injuring his shoulder while colliding in the first half and then taking a finger to the eye late in the second. However, Williams said he expects his senior guard will be fine for Friday night joking that "he's just a little soft."

Maye, who grew up in the Charlotte suburb of Huntersville, was excited to get a win in his return home especially after the Tar Heels lost here in the second round of the NCAA Tournament to Texas A&M.

"I love coming back to Charlotte and this was a big win for us," Maye said.

Mack believes the Cardinals are well prepared for the NCAA Tournament after competing in the ACC with three teams ranked in the top five in the country.

"I told these guys in the locker room that we have played the best teams in the country," Mack said. "I mean there's a reason that y'all are talking about a possibility, not saying it's going to happen, a possibility of three No. 1 seeds. That's incredible. ... It's the best conference in the country, in my opinion."

Louisville: Despite the loss, the Cardinals appear to have a good chance to get an at-large berth in the NCAA Tournament as a 20-win team in a tough conference.

North Carolina: The Tar Heels arrived in Charlotte chasing a No. 1 seed in the NCAA Tournament and if they continue to play like this over the next two days they'll be a lock to get one.

Louisville: Will await word on an NCAA Tournament bid.

North Carolina: Will face the winner Duke-Syracuse winner in the semifinals Friday night.