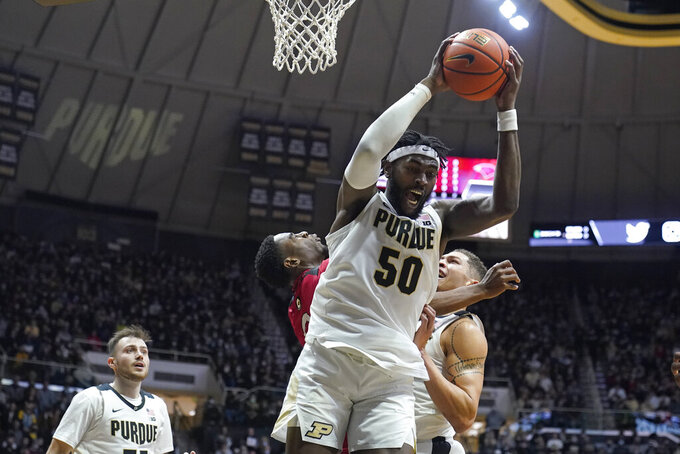 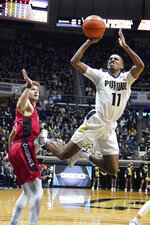 Another dominant victory will suffice.

Jaden Ivey finished with 12 points and five rebounds for Purdue.

“They really stretched us out and our closeouts weren't great," Painter said. “But I don't think you can lose sight of taking good shots — I just wish we had made a few more."

Purdue (11-1) made more than enough in its third straight victory.

And since losing for the first time and escaping a closer-than-expected contest against North Carolina State, the Boilermakers appear to have gotten back on track with their last two wins coming by a total of 49 points.

No, Purdue didn't play with its trademark clean, crisp style. Instead, it missed its first five free throws, had six first-half turnovers and allowed the Cardinals’ 3-point shooters to keep them close — for about 10 minutes.

Then the school that has only been eligible for Division I championships since 2017-18 was overwhelmed by a talented team and superior athletes.

“They are so difficult to deal with because they are so well-coached," Incarnate Word coach Carson Cunningham said after returning to his alma mater. “It's definitely something we feel we can use to get better and hopefully we did some things that will help them get better."

Benjamin Griscti made four 3-pointers and finished with 14 points to lead the Cardinals (2-10). Drew Lutz, who grew up in Indiana, had eight rebounds and nine assists — not nearly enough for Incarnate Word to avoid a third loss in five games.

And it didn't take the Boilermakers long to assert themselves.

An early 10-0 run helped Purdue take control initially and when Incarnate Word cut the deficit to 21-16 with consecutive 3s midway through the first half, Purdue delivered a decisive blow with a 15-2 spurt that made it 36-18 — a lead it maintained the rest of the game.

Purdue still led 45-27 at halftime and never allowed the Cardinals to get closer than 17 in the second half.

Incarnate Word: The Cardinals might give other teams trouble with their 3-point shooting. But it was more of a nuisance than a threat against Purdue. Cunningham's team simply couldn't match up against a vastly more talented opponent.

Purdue: The Boilermakers weren't clicking on all cylinders, but they didn't need to in this game. Solid 3-point shooting and defense were enough to get the job done. Painter knows his team must play cleaner when it returns to action after the long holiday break.

Incarnate Word: Godsgift “GG” Ezedinma had seven points in the first half and finished with nine. Top scorer Josh Morgan wound up with six points and five rebounds. ... The Cardinals were 12 of 27 on 3s and 10 for 27 on 2-pointers. They were outrebounded 46-23. ... Cunningham's team previously lost 87-60 at top-ranked Baylor, the defending national champion, and 84-62 at 2019 NCAA runner-up Texas Tech.

Purdue: Mason Gillis scored 10 points. ... The Boilermakers were 11 of 32 beyond the arc and had a 38-12 scoring advantage in the paint. ... Purdue extended its home winning streak to 12 games, and 13 in a row against non-league foes. ... The Boilermakers can tie the school record for most consecutive weeks ranked in the top three (six) if they stay there Monday. They won't play again until after the next poll is released.

Cunningham received a standing ovation from the sellout crowd after a long introduction from the public address announcer. The Incarnate Word coach started 75 games and scored 886 points in his career as he helped Purdue reach the 1999 Sweet 16 and the 2000 Elite Eight.

“Carson is a good guy. He was a good player here and anytime you have a guy like that come back, it's a special moment," Painter said.

Incarnate Word: Takes on another power-conference school when it visits Texas on Dec. 29.

Purdue: Takes an eight-day break before welcoming Nicholls to Mackey Arena on Dec. 29.