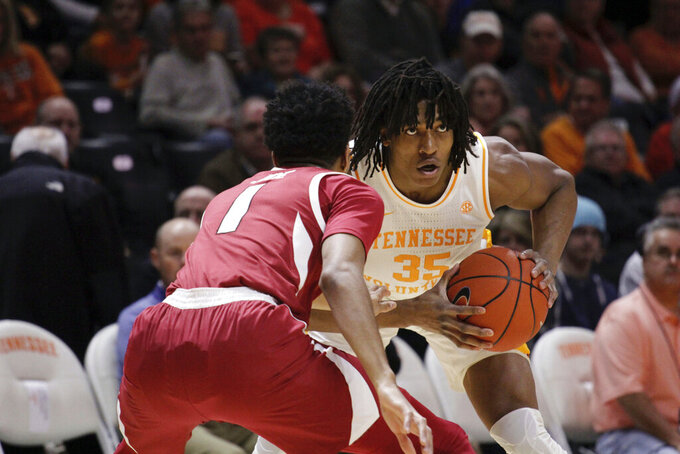 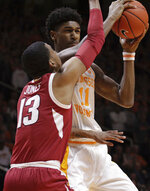 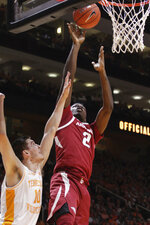 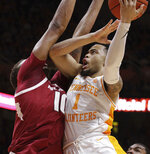 As far as he's concerned, those two guards are starters who happen to come off the bench.

Turner and Bowden combined to score 40 points, and the third-ranked Volunteers whipped Arkansas 106-87 on Tuesday night for their 11th consecutive victory.

"We definitely have seven guys that we can start, and who knows what we'll do with the lineup (moving forward)?" Barnes said. "I do think some guys respond better sitting there and watching the game a little bit and coming in and doing some things."

This marked Tennessee's highest single-game point total since setting the school scoring record in a 124-49 blowout of UNC Asheville on Nov. 17, 2009.

"They're probably the No. 1 team in the country with the way they're playing right now," Arkansas coach Mike Anderson said.

Both have dealt with adversity this season.

Turner was the 2018 SEC co-sixth man of the year but played in just three of Tennessee's first 12 games while recovering from surgery to his left shoulder. Bowden, a starter each of his first two seasons, was moved to a bench role in late November.

They've bounced back quite well.

Turner returned for the start of SEC competition and was just four points away from his career high Tuesday. He also played the kind of defense that has Barnes saying "he could be as good a defensive guard as there is in the country if he wants to do it."

"I wouldn't say (the shoulder's) 100 percent, to be honest with you because some days you have bad days, but I think after surgery, you have stuff like that," Turner said. "I'm good enough to play. I'm good enough to feel good. It's been good lately."

Bowden has scored 19 points per game against SEC foes. He hasn't scored fewer than 17 points in any of Tennessee's four SEC games.

Grant Williams added 18 points for Tennessee and made all 14 of his free-throw attempts. Admiral Schofield scored all 17 of his points in the second half, and Kyle Alexander had 12 points.

Arkansas: Foul trouble prevented Arkansas from ever having a chance. Gafford, the Razorbacks' top scorer and rebounder, played just 20 minutes before fouling out with 4:33 left. Reserve forward Gabe Osabuohien and starting guard Adrio Bailey also fouled out. Osabuohien got his five fouls in only 10 minutes of playing time. Tennessee was 35 of 39 and Arkansas went 13 of 22 from the foul line.

Tennessee: The Vols continue to show they have the depth to thrive even when one of their top players isn't contributing much. Schofield entered the night averaging 17.7 points to rank second in the SEC, but he picked up two fouls in the first six minutes and had a scoreless first half. Tennessee still led 55-34 at halftime. Schofield did score Tennessee's first 14 points of the second half.

Arkansas' five losses before Tuesday had been decided by a total of 19 points. The Razorbacks' largest margin of defeat was six.

Yet they never had a chance in this one.

The game wasn't even five minutes old when Tennessee capitalized on Arkansas turnovers to go on a 14-0 run. Tennessee never looked back.