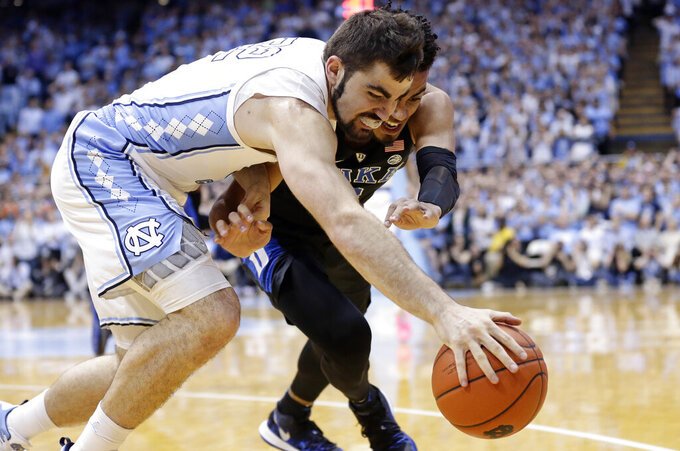 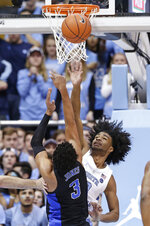 CHAPEL HILL, N.C. (AP) — Third-ranked North Carolina handled every push fourth-ranked Duke could manage, both in building a big lead and then hanging onto what was left of its edge in the final minutes.

When it was over, the Tar Heels were ready to cut down nets, too.

The win also gave the Tar Heels their first regular-season sweep of the Blue Devils in a decade, this one with Duke freshman star Zion Williamson sidelined yet again by the knee sprain suffered in the first meeting.

Afterward, as fans lingered for farewell speeches from upperclassmen playing their final home game, the Tar Heels started working on the net to celebrate.

"It's OK if you need to go, it's all right," UNC coach Roy Williams told the crowd as arena staff brought ladders onto the court. "Because we're going to have fun ourselves. We're going to cut down that frickin' net as ACC champions."

Senior Kenny Williams scored a season-high 18 points for the Tar Heels (26-5, 16-2), who led by 15 with about 6½ minutes left but had to hold off a rally by the Blue Devils, who also lost starting big man Marques Bolden early in this one to his own knee injury.

The Tar Heels bumbled their way to the finish after building their big lead, letting the Blue Devils (26-5, 14-4) get within five late. Ultimately UNC held on to finish tied alongside second-ranked Virginia atop the final league standings.

Virginia secured the No. 1 seed for the league tournament by beating Louisville earlier Saturday. The Cavaliers owned the head-to-head tiebreaker with the Tar Heels by winning in Chapel Hill last month.

The Tar Heels had last swept the two-game set with Duke on Tyler Hansbrough's Senior Day in 2009 for a team that went on to win the NCAA title. And it didn't matter to them that Williamson — a candidate for national player of the year and a possible No. 1 overall NBA draft pick — barely saw the court in the first game and not at all in the second.

"No, because at the end of the day we both had to go out there and play the game," said graduate student Cameron Johnson, who had 14 points and 10 rebounds. "In their case, they knew he wasn't going to play. They've got guys who are highly touted guys, talented guys, it's a basketball game, you've got to play it."

Freshman RJ Barrett scored 26 points as the no-doubt lead weapon for Duke's offense with Williamson out. But Duke shot just 23 percent after halftime, even as it got as close as 75-70 on Barrett's 3-pointer with 2:19 left.

"We were down by 15 and we put ourselves in a position where we had a chance," Duke coach Mike Krzyzewski said. "I'm proud of the fact that our guys put us in that position. ... We'll be OK if we keep doing that."

Duke: There's no doubt the Blue Devils are a different team without Williamson, the 6-foot-7, 285-pound walking highlight reel of jaw-dropping athleticism and high-flying dunks. Without him, Barrett and fellow freshman Cam Reddish (17 of his 23 points before halftime) had to carry the load offensively and had trouble keeping up when the Tar Heels made their move.

"It's not the greatest feeling losing to them," Duke freshman point guard Tre Jones said. "But just as a team, we've got to learn from this loss for sure."

UNC: The Tar Heels shot just 41 percent, missed free throws and went the final 6:47 without a basket after taking the 75-60 lead, so things were hardly perfect. Yet that 11-0 burst that finally jarred the Tar Heels loose in a tight game was a display of why they have lost just twice in league play: fast-paced, explosive and at times withering for opponents to chase down.

Duke ruled out Williamson for the fifth straight game earlier Saturday. Krzyzewski had said Williamson had gotten in his "first really good workout" on Thursday as he continued his recovery and now had to improve conditioning while getting used to contact again.

After the loss, Krzyzewski was optimistic about getting him back for the ACC Tournament.

"I think we'll get Zion back for Thursday," he said.

Things got tougher for Duke when it lost Bolden roughly 2½ minutes when he fell into the basket support while picking up a foul on a block attempt at the rim. Krzyzewski said afterward was a sprained ligament in his left knee.

While Barrett scored 26, he made just 10 of 27 shots while seeing a lot of UNC's Kenny Williams. Williams drew three charges on Barrett and also blocked Barrett's 3 with 56 seconds left.

"I think I was running on adrenaline from the tip, Williams said, adding: "Playing defense on RJ for 40 minutes took a lot out of me."

Duke: The Blue Devils have a bye as the No. 3 seed into Thursday's quarterfinals at the ACC Tournament.

UNC: The Tar Heels have a bye as the No. 2 seed into Thursday's quarterfinals at the ACC Tournament.