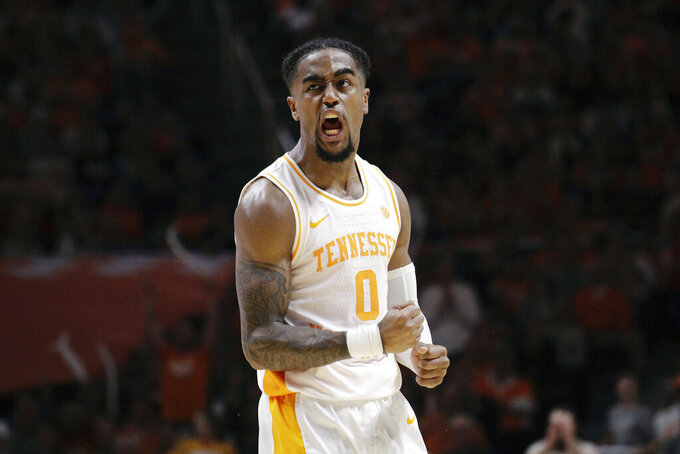 Tennessee guard Jordan Bone (0) reacts from a foul made by Alabama in the second half of an NCAA college basketball game, Saturday, Jan. 19, 2019, in Knoxville, Tenn. Tennessee won 71-68 (AP Photo/Shawn Millsaps) 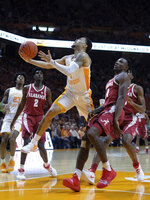 KNOXVILLE, Tenn. (AP) — Tennessee did its part with a walk-off win of sorts against Alabama.

Enough for a No. 1 ranking? All the Volunteers can do now is sit and wait.

Grant Williams scored 21 points, Alabama was called for traveling with 3.2 seconds left and No. 3 Tennessee rallied past the Crimson Tide 71-68 on Saturday for its 12th straight victory and a chance to climb atop the AP Top 25 .

After No. 1 Duke lost to Syracuse on Monday and No. 2 Michigan fell at Wisconsin on Saturday, the Volunteers (16-1, 5-0 Southeastern Conference) could lead the poll Monday for the first time since 2008. The No. 1 spot likely will go to either Tennessee or Duke, which beat No. 4 Virginia 72-70 later Saturday to bolster its resume.

"I wouldn't say our main focus is on that, but it's definitely something that we would like," Tennessee guard Jordan Bone said. "We would definitely love to be in that position for sure."

Tennessee won its first four SEC games by an average of 25 points but had a much tougher time against Alabama (11-6, 2-3)

The Vols blew a 15-point lead and trailed for much of the second half before pulling ahead for good on Admiral Schofield's basket with 2:12 remaining.

"I think that we're going to be in a lot of games like this whether we're ranked 1, 21 or 41," Tennessee coach Rick Barnes said. "I just think this league's like that. Everybody's fighting."

Tennessee led 69-68 when Williams was called for an offensive foul after leaning into Alabama's Donta Hall with 11.3 seconds left. After a timeout, Alabama worked the ball to John Petty, who matched a career high with 30 points.

This time, Petty couldn't deliver. The sophomore guard was called for traveling as he began a drive around the foul line.

"In my opinion, I felt like I didn't travel," Petty said. "But it was the call, and I guess we've got to live with it."

Lamonte' Turner made two free throws to extend Tennessee's lead to 71-68 with 2.5 seconds left. Alabama had no timeouts remaining, and the Tide's Kira Lewis Jr. wasn't even to midcourt when he launched a desperation shot that missed.

Petty also had a chance to put Alabama ahead when he lined up for a 3-pointer with the Tide trailing 67-66. Williams blocked the shot with 1:22 left. Petty was 6 of 9 from 3-point range until that block.

"If he got (that shot) off, he was going to make it because he was hot all night," Williams said. "John's a really good shooter, especially when he's hot. I knew I had to close out hard on him. I didn't know I was going to get a piece of the ball. I was just trying to affect his shot."

Hall had 16 points and 12 rebounds for Alabama. Lewis added 12 points.

Alabama: The Crimson Tide seemed on the verge of a huge resume boost when it scored 16 straight points midway through the game to erase a 15-point deficit. It instead became just the latest heartbreaking loss for Alabama, which earlier this season fell to Georgia State and Texas A&M on 3-pointers at the buzzer. Although he had 30 points, Petty was scoreless after making a 3-pointer at the 9:52 mark.

Tennessee: The Volunteers last won 12 straight in 1976-77, when they went 22-6 and earned a share of the SEC regular-season title. Tennessee survived this one despite shooting just 29.4 percent (10 of 34) in the second half and missing 10 straight field-goal attempts at one point.

Former Tennessee star Tony White, who is battling leukemia, attended Saturday's game and received a standing ovation from the sellout crowd when he was introduced at midcourt during a timeout. White's 51-point performance against Auburn in February 1987 remains Tennessee's single-game scoring record.

Alabama was just 8 of 18 from the foul line, including 4 of 13 in the second half. Alabama missed 9 of its first 10 second-half free throws.

Alabama hosts No. 18 Mississippi on Tuesday.

Tennessee is at Vanderbilt on Wednesday.