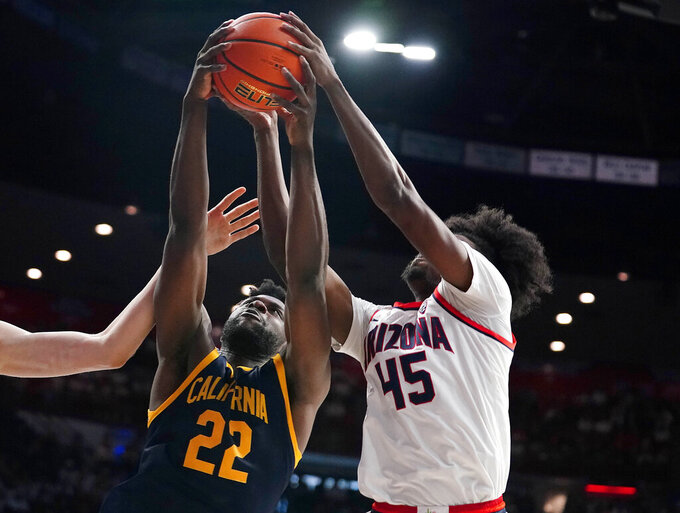 California's ND Okafor (22) battles for a rebound with Arizona's Cedrick Henderson (45) during the first half of an NCAA college basketball game, Sunday, Dec. 4, 2022, in Tucson, Ariz. (AP Photo/Darryl Webb)

TUCSON, Ariz. (AP) — Azuolas Tubelis and Oumar Ballo combined for 42 points and 19 rebounds, and No. 4 Arizona bounced back from its first loss by holding off winless California 81-68 on Sunday.

Tubelis had 25 points and 12 rebounds, while Ballo — the Division I leader in field goal percentage — made 7 of 10 shots en route to 17 points, with seven rebounds and four blocks.

Cal (0-9, 0-2) continued its worst start in program history, extending the nation’s longest active losing streak to 12 games. The Golden Bears were led by guard Devin Askew, who had 25 points, while forward Lars Thiemann added 18 on 9-of-14 shooting.

The Bears scored their most points since a 78-64 win at Oregon in February, shooting a season-high 44.4 percent and staying competitive on the boards.

“We made one less basket than Arizona made, they just murdered us at the foul line,” said Cal coach Mark Fox, whose team attempted eight free throws to 26 for the Wildcats. “We’ve played really hard. We’ve had some challenges just trying to get enough healthy guys on the floor to build a cohesive team.

"The response of our players to that adversity has been terrific all the time. I’m very disappointed in the start of our season. These kids have been tremendous in their response to it.”

Tubelis had more field goals in the first 9 minutes than Cal, scoring 15 points to put Arizona up 24-10. The Wildcats extended the lead to 32-17 before Askew hit back-to-back 3-pointers, getting fouled on the second to score seven points in a 28-second span and cut the deficit to eight.

The Golden Bears got within 34-28 with 3:52 left in the first half on Thiemann's layup but missed four of their next five shots.

California: Injuries have kept the Golden Bears from having their full compliment of players. Including Sunday, Cal has had scholarship players miss a combined 27 games, with part-time 2021-22 starter Jalen Celestine and Hartford transfer Dejuan Clayton yet to play.

Arizona: The Wildcats have won 23 consecutive games at McKale Center, the fifth-longest active streak in Division I. Arizona hasn’t lost at home since falling 63-61 to Oregon in February 2021.

California: Heads home to host Eastern Washington on Wednesday, the start of a stretch of six out of seven at home.

Arizona: Takes on No. 10 Indiana on Saturday in the Las Vegas Clash in Las Vegas.