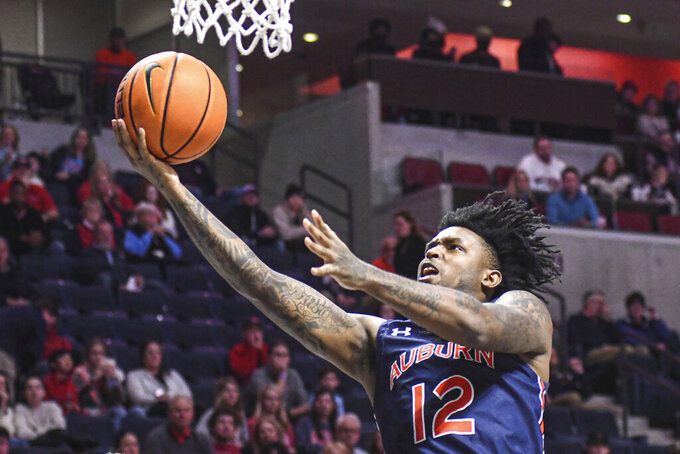 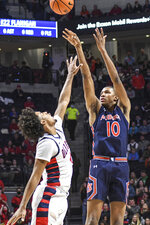 In extending its winning streak to 13 games, Auburn (16-1, 4-0 Southeastern Conference) also got 15 points from Jabari Smith, and 14 from both K.D. Johnson and Wendell Green Jr.

“Kessler was dominant. We don’t win without him,” Auburn coach Bruce Pearl said. “He rebounded, blocked shots and finished around the rim. It was just a great job. And we needed it tonight.”

Auburn used a 24-9 run over nine minutes — including four 3-pointers, two by Green, and three layups from Kessler — to take a commanding 71-60 lead with 4:09 remaining. After that, Ole Miss never got closer than four points.

“There were pockets of really good play for us,” Mississippi coach Kermit Davis said. “Give Auburn credit. They played well, especially in the second half. I think they’ve got a chance to win the national championship.”

The Rebels built a 38-24 first-half lead and led 44-38 at halftime. Auburn responded with a 7-0 run in the final minute of the first half, setting up the successful second-half surge.

“I really don’t know if it was anything specific at the end of the first half,” Pearl said. “I told K.D. (Johnson) to not sit back and press and make plays and we were able to do that.”

Auburn: The road win was important on several levels, especially since Ole Miss has been a prolonged source of frustration during the rise of the Tigers' program under Pearl. The Rebels had won 10 of the 14 previous meetings, including sweeps last season and of the 2019 Final Four team.

The Tigers dominated the final 21 minutes Saturday, limiting Ole Miss to 7 of 24 from the field in the second half.

“In the second half, I quit worrying about fouling and just tried to play,” Kessler said. “The big thing is we stick together, especially when we got down. Credit to my teammates.”

Ole Miss: A month ago, the Rebels were serious NCAA tournament hopefuls. Since then, leading scorer Jarkel Joiner has been sidelined for six weeks with a lower back injury and top forward Robert Allen is out with a season-ending knee injury. The effort was inspired Saturday, but the Rebels could not keep the pace in the second half.

“I’ve told our players that nobody cares about our (injury) problems, we just have to go back and play to the best of our abilities” Davis said. “The great news is we have great kids that will do that. I just hate we’re not full right now.”

Auburn, the highest-ranked SEC team at No. 4, has won 13 straight games. Since No. 3 UCLA and No. 1 Baylor suffered losses during the week, the Tigers should climb to higher.

Auburn: Begin a two-game homestand, starting with Georgia on Wednesday.