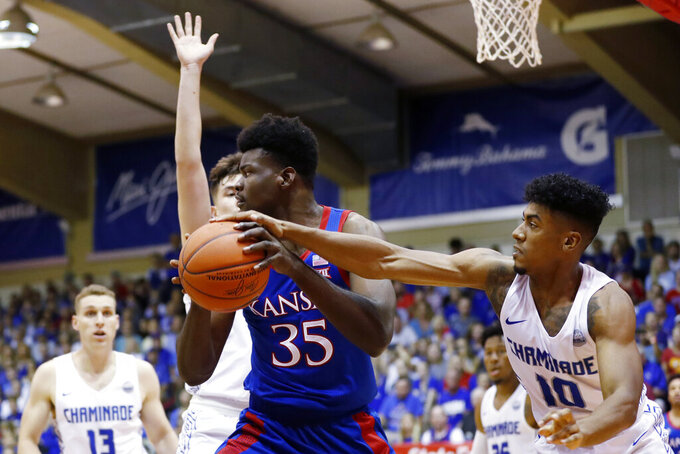 LAHAINA, Hawaii (AP) — Kansas was good, not great, and had to play most of the first half without big man Udoka Azubuike.

The fourth-ranked Jayhawks were certainly better than Division II Chaminade, earning them a spot in the Maui Invitational semifinals. That’s enough — for now.

Devin Dotson scored 19 points, Azubuike added 15 despite early foul trouble and Kansas cruised to a 93-63 victory over the Silverswords on Monday.

Isaiah Moss had 13 points for the two-time Maui champion Jayhawks, who move on to face UCLA or BYU in Tuesday’s semifinals.

“We just needed to lock in and do what we needed to do in order to be successful,” said Kansas big man David McCormick, who had 10 points. “Emphasizing defense and just making them turn over the ball is what we did.”

Andre Arissol had 18 points and Tyler Cartaino 17 to lead Chaminade. The Silverswords led early, but, as is often the case against Power Five schools, had a huge size disadvantage against the Jayhawks.

“Unfortunately, we have had two weeks to sit and prepare for them and watch them way, way too much and we knew how good they were,” Chaminade coach Eric Bovaird said. “I thought through stretches, we executed our game plan really well and then we weren't locked into what we were supposed to be doing offensively and defensively and that's the moment it kind of got away.”

Kansas opened the season with a two-point loss to Duke after turning it over a whopping 28 times. The Jayhawks have gotten a better grip since then, heading into Maui with three straight double-digit wins.

Chaminade returned to the championship round this year after playing in the opening rounds last season.

The tournament hosts have had a knack for pulling off upsets against bigger opponents, most recently against California in 2017.

The Silverswords opened by making three of their first four shots to take a brief lead.

Once the Jayhawks got acclimated to shooting in the tiny confines of Lahaina Civic Center, they flew away. Kansas used a 20-2 run to go up 20-7 and made 18 of 32 shots to lead 47-27 at halftime with Azubuike limited to 7 minutes with foul trouble.

Another short run to start the second half put the Jayhawks up 61-33 and the game out of reach.

“We tried to double them a lot and we knew even with doubles it would be hard to do, so we kind of went to make plays and get strips,” Cartaino said. “That didn't happen a lot and we paid for it.”

Kansas squelched any thought of an upset with its big early run and cruised into the semifinals.

Chaminade needed to shoot well to have any chance of keeping it close and wasn’t nearly good enough to keep up with the Jayhawks.