No. 4 Kentucky begins with concerns about Tshiebwe's health 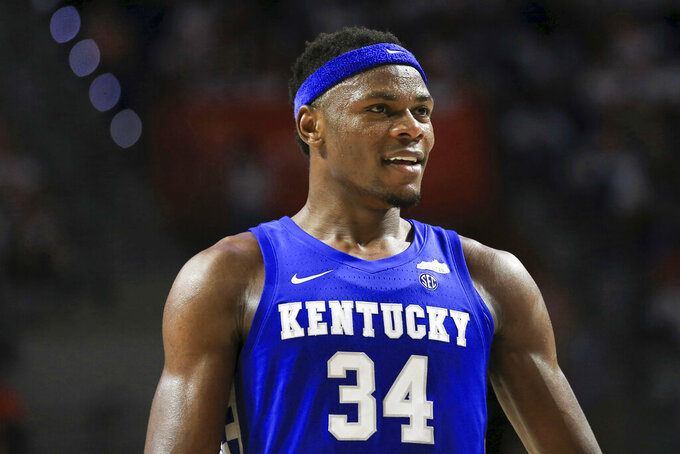 FILE - Kentucky forward Oscar Tshiebwe (34) smiles against Florida during the second half of an NCAA college basketball game on March 5, 2022, in Gainesville, Fla. Kentucky begins with college basketball’s best player and a preseason No. 4 ranking, though it’s unknown when injured Tshiebwe will be available to help the Wildcats live to up to their lofty billing. (AP Photo/Matt Stamey, File)

LEXINGTON, Ky. (AP) — Kentucky begins the season with college basketball’s best player and a preseason No. 4 ranking, though it’s unknown when injured Oscar Tshiebwe will be available to help the Wildcats live to up to their lofty billing.

To hear coach John Calipari tell it, the consensus national player of the year isn’t the only one nursing injuries as another season of high expectations commences.

Kentucky (26-8, 14-4 Southeastern Conference last season) is again the early conference media favorite thanks in large part to the return of 6-foot-9 Tsheibwe, who averaged 17.4 points and a nation-leading 15.1 rebounds to sweep all six major awards as the nation’s best player.

The Associated Press player of the year returned for his senior season to resume a NCAA championship quest that was rudely derailed in a first-round NCAA upset by No. 15 seed Saint Peter’s, and to expand his skills for an expected spot in next year’s NBA draft.

Which is why Tshiebwe’s recent “minor” procedure on his knee, as Calipari described it last week, has drawn major attention.

“Now, you know me well enough, I’ll keep him out longer than he probably should. But he’s pretty resilient.”

The Wildcats have plenty around Tsheibwe to make a deep postseason run.

Which is why Wheeler and Calipari aren’t concerned with when Tshiebwe returns as much as how much better he might be.

“You guys are going to see,” Wheeler said. “All he wants to do is win. That’s who he is. One of the reasons he came back is he said he wants to win a national championship.”

Kentucky’s latest group of All-America prospects include forward Chris Livingston and guard Cason Wallace, both rated in the top 10 by national recruiting blogs. Another guard, Adou Theiro, has also drawn raves for his multiple skills shown in summer practice.

Ugonna Kingsley Onyenso, a 6-11 post player rated top-35 in next year’s class, reclassified and signed and will join the team this semester.

Depending on how long Tshiebwe is out, Kentucky has several teammates ready to step into his spot or bolster its post presence. Toppin showed promise as a scorer and seems ready for more opportunities. Ware and Collins figure to play bigger roles than last season, where they combined for just 4.4 points and 4.0 rebounds.

Guard CJ Fredrick, an Iowa transfer who missed last season after tearing his left hamstring, is healed and expected to contribute from the perimeter. As a Hawkeyes sophomore he shot 47% from behind the arc and posted a 5.2 assist-to-turnover ratio.