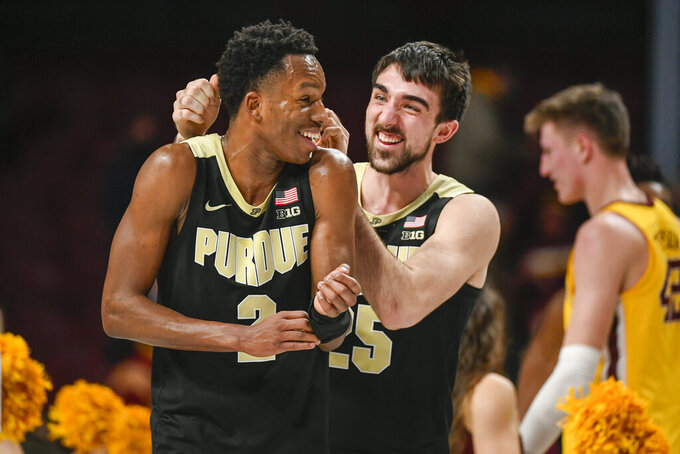 MINNEAPOLIS (AP) — Jaden Ivey scored 21 points and Zach Edey added a double-double of 14 points and 12 rebounds, leading No. 4 Purdue to an 88-73 win over Minnesota on Wednesday night.

While the Boilermakers excelled near the rim, scoring 40 points in the paint, Purdue also hit 12 of 24 shots from 3-point range in handling the Gophers.

“Like any other game, we're going to try to establish our size," Purdue head coach Matt Painter said. “Just the balance of getting deep post-ups, getting ready to shoot, seeing how they're going to handle those post-ups, and then just executing our sets.”

Purdue followed up its dramatic last-second win over Ohio State with a comfortable road victory. The Gophers briefly made things interesting in the second half before running out of steam.

Edey scored nine of his points in the first four minutes, and the Boilermakers started 8 of 8 from the floor.

“It really comes from setting the tone right from the beginning on my first shift, just from the tipoff," Edey said. “It creates a gravity almost towards me where, for the rest of the game, I can kick out to other people. Other people were getting wide-open layups because they didn't want to help off me.”

Hunter was 4 of 6 from 3-point range to lead all Boilermakers from deep. He has scored in double figures in three of Purdue's last four games.

“It's always good to get career highs, especially on the road when usually you don't play your best on the road on the offensive side,” Hunter said.

Minnesota cut Purdue’s 15-point halftime lead to seven after five straight points by Treyton Thompson that made it 63-56. The Gophers couldn’t get any closer as Purdue began making stops on defense.

“We're never going to look at the score and be like, ‘Oh, we’re out of this game,'” Battle said. “We saw we were down 18 today. We fought back and we tried to make it a game, and I thought we did make it a game.”

Minnesota threatened one last time, with four minutes remaining. Battle hit a 3-pointer from the corner to make it a 10-point game, but Purdue’s Trevion Williams found a cutting Ivey for an easy dunk to answer.

The Boilermakers used their size to dominate on the glass. Purdue outrebounded Minnesota 39-23.

“They're a good team, talented team,” Willis said of Purdue. “They've obviously got some huge guys inside and got some wings that can shoot the ball really well.”

Minnesota limited Williams. The Boilermakers’ third-leading scorer didn’t have a point until a free throw early in the second half. He finished with five points and three fouls in 13 minutes.

Minnesota’s Eric Curry came off the bench in his second game back from an ankle injury. He struggled from the floor with 1-for-7 shooting.

Purdue: The Boilermakers continued to show the depth that has led to a top-5 ranking. Three players were in double-figures at halftime in Purdue's road win.

Minnesota: The Gophers fell to 0-5 this season against ranked teams, including losses against ranked opponents in their last three games. Wednesday’s game was the most lopsided of the five.

After moving into the top five this week, Purdue will look to stay there when it faces Michigan on Saturday.

Minnesota: At Iowa on Sunday.