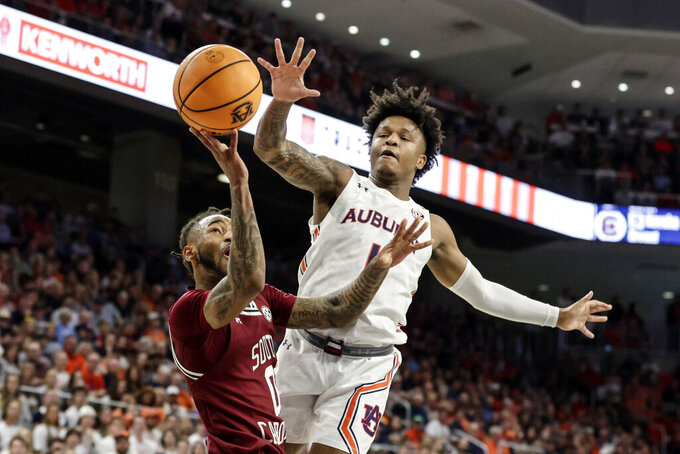 South Carolina guard James Reese V (0) is fouled by Auburn guard Wendell Green Jr. (1) as he goes up for a shot during the first half of an NCAA college basketball game Saturday, March 5, 2022, in Auburn, Ala. (AP Photo/Butch Dill) 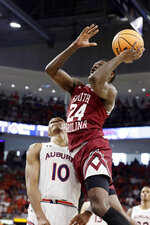 AUBURN, Ala. (AP) — The Auburn Tigers got to celebrate a solo Southeastern Conference title with a flood of orange and blue confetti and no thoughts of tiebreakers.

A team led by newcomers is hoping for more March celebrations.

Freshman Jabari Smith scored 21 points, transfer K.D. Johnson had 18 and No. 5 Auburn won the championship outright with an 82-71 victory over South Carolina on Saturday.

No tiebreakers needed, though the Gamecocks (18-12, 9-9) did rally after trailing by 19 early in the second half

“To be 15-3 in this league says they came to play every night,” Auburn coach Bruce Pearl said. “They really did. Now that is virtually impossible to do when you’re dealing with 18-, 19-, 20-year-old kids. Our kids came in to play every single night. They took no team for granted.”

Auburn players and coaches celebrated on the court amid a flurry of confetti before taking turns cutting down the net in lengthy postgame festivities. The team held at least a share of the SEC lead all season.

Smith made 3 of 3 3-pointers and is 21 of 37 over the last six games. The highest rated recruit in program history and potential NBA lottery pick is averaging 25 points during that span.

“That’s why I came here, was to win,” Smith said. “I felt like this school was going to put me in the best position to win a national championship, win the SEC, win all these accolades that we’re trying to get.

"I’m not surprised at all that we won it. It feels good. I just want to keep it going.”

Kessler scored 11 and Wendell Green 10 for the Tigers. Kessler played his second straight game with a brace on his left shoulder from an injury sustained last weekend against Tennessee.

All four top scorers are in their first season with the Tigers, along with starting point guard Zep Jasper.

Auburn would have been the No. 2 seed in Tampa with a loss because of head-to-head records among the four teams still in contention entering Saturday.

The Tigers closed the first half on a 24-9 tear to take a 48-31 lead into halftime. Smith scored all 15 of his first-half points in the final 11 minutes after South Carolina pulled to within two.

Auburn pushed the lead to 19 coming out of the locker room, but South Carolina cut it to 78-71 with 1:16 left on Couisnard's second straight layup.

The Tigers made 4 of 6 free throws from there.

The Gamecocks still enter the postseason having won five of their last seven.

“We’ve played really good basketball down the stretch,” Martin said. “We just came into the building that probably has the best home-court environment in the SEC right now, not from size but from energy. And we went nose to nose with them.”

South Carolina came out sloppy with five turnovers in the first four minutes, including a couple of errant passes. The Gameocks took six minutes to make their first field goal and turned it over 16 times.

Auburn Arena officially is now Neville Arena. The name change followed the single largest gift to Auburn's athletics program from Bill and Connie Neville. The couple were recognized on court during the first time out.

Both teams head to Tampa for the SEC Tournament, where Auburn opens on Friday.