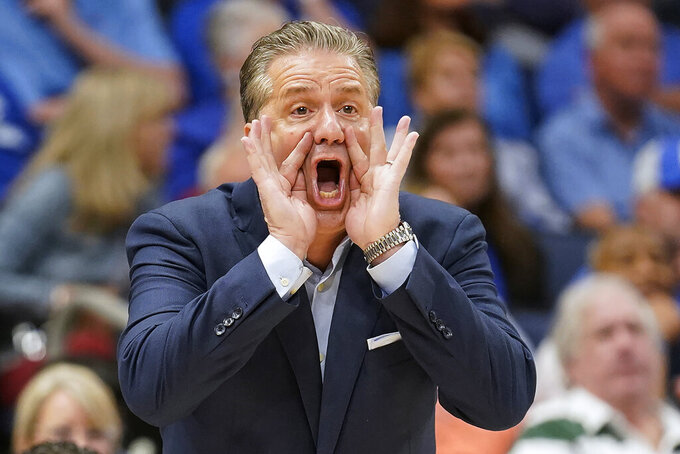 Kentucky coach John Calipari shouts at an official during the second half of the team's NCAA college basketball game against Vanderbilt in the Southeastern Conference men's tournament Friday, March 11, 2022, in Tampa, Fla. (AP Photo/Chris O'Meara) 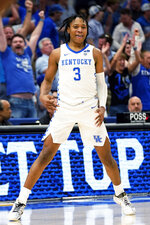 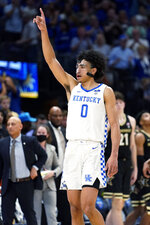 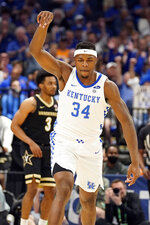 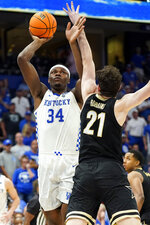 TAMPA, Fla. (AP) — TyTy Washington hasn't played like this in nearly two months. He hasn't needed to, either.

After taking a backseat to standout forward Oscar Tshiebwe late in the regular season, Washington stepped into the spotlight Friday night and put Kentucky on the verge of a No. 1 seed in the NCAA Tournament.

Washington scored 25 points, Tshiebwe tied a half-century-old school record and the fifth-ranked Wildcats beat Vanderbilt for the third time in two months, 77-71 in the quarterfinals of the Southeastern Conference Tournament.

“His ability to make shots and make free throws and make floaters, he is skilled,” Kentucky coach John Calipari said.

Washington was at his best during a second-half spurt, scoring eight straight points that helped the third-seeded Wildcats (26-6) create a little breathing room in a back-and-forth game. The freshman hit consecutive 3-pointers from the corner, just a few steps from Kentucky’s bench, and then sank a floater in the lane that barely tickled the net and made it 69-60.

He added four free throws in the final 19 seconds to seal the victory inside a packed, pro-Kentucky crowd at Amalie Arena. Washington made 8 of 17 shots, including 4 of 5 from behind the arc.

“Everybody on the team knows what I can do and what I can bring for this team,” Washington said. “When I have my teammates pushing me, giving me confidence, then that’s going to be the result.”

Tshiebwe, a national player of the year candidate, notched his 14th consecutive double-double and 26th of the season with 12 points and 14 rebounds. That matches the single-season mark set by Kentucky great Dan Issel in 1969-70.

Kentucky won for the 15th time in its last 18 games and moved a step closer to securing a No. 1 seed in the upcoming NCAA Tournament. A win Saturday should do it: The Cats advanced to play No. 2 seed Tennessee in the second of two semifinals. Texas A&M and Arkansas will meet in the other.

Tshiebwe also had a career-high five blocks, and the Wildcats needed every one of them and then some to hold off the pesky Commodores (17-16) for the third time eight weeks.

Kentucky looked like it was going to pull away in the second half when it used a 15-1 run to turn a seven-point deficit into a seven-point lead. But Vandy coach Jerry Stackhouse called timeout to regroup, and the Commodores clawed their way back.

Scotty Pippen Jr. — his famous NBA father cheering behind the Vandy bench — wasn’t nearly as effective as he’s been all season or in either of his first two games against Kentucky (32 and 33 points, respectively).

Pippen ended up with 10 points and seven assists in the quarterfinal matchup, missing 15 of 17 shots from the field and 6 of 7 from 3-point range. He only got to the free-throw line five times, an off night for a guy who essentially lives at the charity stripe.

“I’ll give credit to them. They had a good scheme on me, but we played three games in three days," Pippen said. “I think that had some effect as well. Just tired legs. I got a lot of open looks that I usually knock down every game, but I just couldn’t even hit the rim today. It's weird feeling.”

Jordan Wright picked up the slack, scoring 27 points on 10-of-12 shooting. It wasn't enough against a Kentucky team with so many options and answers — and the crowd behind it.

“Felt like a home game for them. Felt like we were playing at Rupp (Arena)," Wright said. "They had a great crowd, had great energy. When they needed to be picked up and they needed some energy, the fans were there with the chant. Hats off to them for traveling the way they do.”

Jacob Toppin, who played the second half with a plastic face shield after sustaining a bloody nose in the opening 20 minutes, finished with 10 points and three blocks.

Vanderbilt: The Commodores showed grit in the tournament, hammering Georgia and upsetting NCAA-bound Alabama. But they ran out of steam while playing for the third straight day.

Kentucky: Big Blue was on the ropes at times and responded every time. Washington came up huge in this one, but it could be Sahvir Wheeler, Kellan Grady or any number of others in the next game.

Kentucky: Faces No. 2 seed Tennessee in a semifinal on Saturday. The teams split their regular-season meetings, with each winning at home.