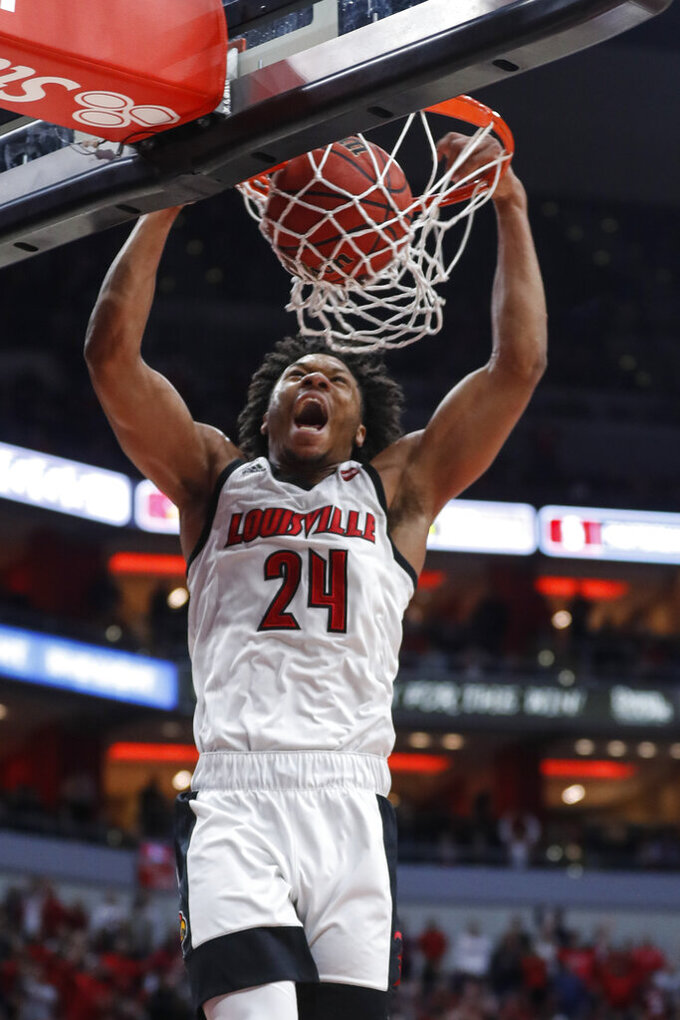 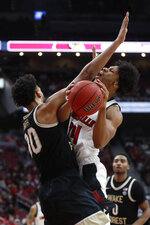 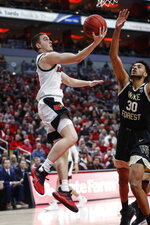 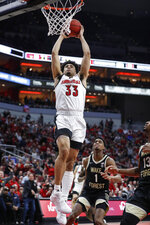 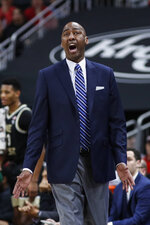 LOUISVILLE, Ky. (AP) — Louisville trailed Wake Forest in tempo and points at halftime. The Cardinals cranked up the energy after the break, and that kept them on their roll.

Jordan Nwora had 21 points and scored the go-ahead basket during an 18-5 second-half run that rallied No. 5 Louisville past Wake Forest 86-76 Wednesday night for its ninth consecutive victory.

Wake Forest led 46-34 at halftime behind 60% shooting before the Cardinals (20-3, 11-1 Atlantic Coast Conference) picked things up and mounted the pivotal run over the first five minutes of the half. Nwora followed Ryan McMahon's four-point play with a breakaway dunk for Louisville's first lead at 52-51, and the Cardinals stretched it to 67-60.

The surge came after Louisville players talked things out in the locker room while coaches met down the hall in coach Chris Mack's office.

“The intensity definitely picked up,” said Louisville guard Lamarr Kimble, whose 14 points came after halftime. “I felt like we were foaming at the mouth at the beginning of the second half to do whatever to get that run. That was big for us to come out there and reshape our whole energy from the first half.”

“Defensively, we didn't adjust," Mack said. “We just did what we were doing a hell of a lot better.”

Nwora made 5 of 8 from deep and 6 of 12 overall. Dwayne Sutton added 15 points and 11 rebounds, McMahon 12 points and Steven Enoch and Malik Williams 11 points each.

Andrien White scored 17 points and Olivier Sarr had 16 points and six rebounds for the Demon Deacons before fouling out. They had sought consecutive wins for the first time since winning three in a row from Dec. 14-Jan. 4.

“We wanted to win this game more than anything," White said. "We felt we were well prepared coming into this game and it didn't tip our way.”

Wake Forest: Unfazed by Louisville at the start, the Demon Deacons pushed their tempo and made clutch shots that forced the Cardinals to try and make up the deficit from outside. The second half was the complete opposite as they were overwhelmed on both ends and couldn't stop Louisville on the perimeter. Wake Forest is 1-4 against ranked schools this season.

“I thought we got off to a really good start offensively, especially from behind three,” coach Danny Manning said. "We shot the ball really well. I thought we did a good job of getting the ball to the paint below the free-throw line, making good decisions and we had guys ready to shoot it on the catch. That gave us a chance to build the lead.

“The second half, not so much.”

Louisville: The Cardinals shot better from deep than inside the arc in the first half and that proved to be their saving grace as shots continued to fall. Most importantly, they contested Wake's attempts more aggressively after halftime, especially in those early moments that seized momentum and the lead.

Louisville hosts defending national champion Virginia on Saturday, looking to end a nine-game losing streak against the Cavaliers. The Cardinals close the regular season in Charlottesville on March 7.