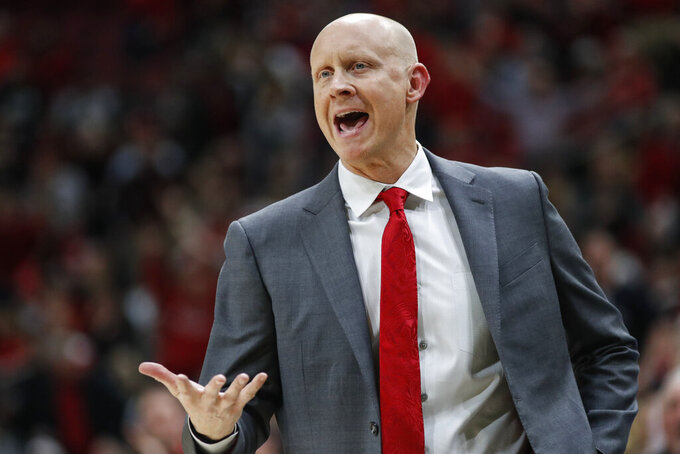 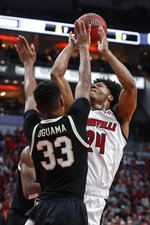 LOUISVILLE, Ky. (AP) — Louisville has has been dominant and resilient at times during its nine-game winning streak and sits atop the Atlantic Coast Conference standings.

The No. 5 Cardinals (20-3, 11-1) now want to be more consistent in their quest to win the school's first ACC championship in men's basketball. Their record is three games better than a year ago, and they’re ranked eighth nationally in field goal defense (37.3%) and tied for 16th in scoring margin (plus-12). Junior forward Jordan Nwora, the preseason ACC player of the year, is the top 3-point shooter in conference play (44%) and second in overall scoring (19.3 points per game).

Since losing at home last month to then-No. 18 Florida State, Louisville has gutted out wins at Pittsburgh, Duke and North Carolina State en route to its best ACC start. During the run, however, they've also had to rally against struggling teams such as Georgia Tech and last-place Wake Forest on Wednesday. While those comebacks demonstrate the Cardinals’ resolve, second-year coach Chris Mack wants them to take charge early and not ease up.

“We've been in some tough moments and been able to overcome those,” Mack said Friday. “We have a veteran crew that's sort of seen it all. We're starting off games turning the ball over a lot more than we need to, but other than that we've got to get better this month.

“We've got a group that continues to believe, really wants to win and has the capability of doing so.”

Certainly, Nwora’s return after an injury limited his participation in the NBA draft combine has provided the most obvious boost. Louisville also has a veteran frontcourt — including Steven Enoch and Dwayne Sutton, who have combined to average 19.4 points and 14.6 rebounds per game — with 6-foot-11 Malik Williams coming off the bench.

Every player in the rotation has the ability to knock down long-range shots, which has also helped Louisville.

“We're a team that has a lot of different options,” Mack added. “One night it might be Ryan and the next night it might be Steven Enoch or Darius Perry. It's hard to key on one player in particular and we’ve been pretty good defensively.”

While that is true, it makes Mack wonder why Louisville has struggled to get past or finish off overmatched opponents.

The Cardinals won’t have the luxury of figuring it out Saturday against defending national champion Virginia (15-6, 7-4), which has won the past nine meetings between the teams and leads the series 15-4. Though several key players have departed, the Cavaliers are still boast the nation's best defense in field goal percentage (36%) and scoring (50.4 points).

Slowing opponents down has been their staple, which will demand more patience from a Louisville squad that prefers a quicker pace. And while the Cardinals play a variation of Virginia’s pack-line defense predicated on denying the paint, containing players such as 6-9 Mamadi Diakite (13.5 points, 7.0 rebounds, 27 blocks) and guard Braxton Key (10.7, 7.4 boards) will be a chore.

Virginia’s 61-56 upset of then-No. 5 Florida State on Jan. 28 ended the Seminoles' 10-game winning streak opened the door for Louisville to grab first place. The Cavs would love nothing more than adding another top-five upset and snapping a streak, especially against a school it has owned.

That leaves the Cardinals no room for error nor reflecting on recent history. Unless it's remembering the good things that has them on a roll.

“Playing Virginia, you don't want to get down to 12 to 14 points early because it's going to be tough to climb back late in the game,” Sutton said. “We have to do a good job taking care of the ball, playing together guarding them and we’ll be fine."