No. 5 Michigan keeps rolling with 69-46 win at Indiana 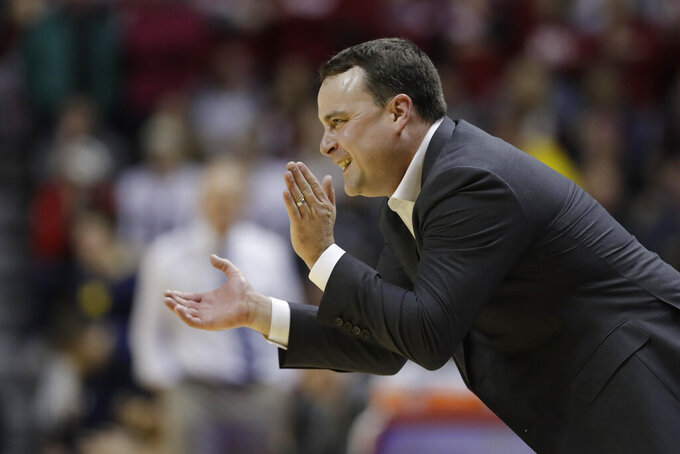 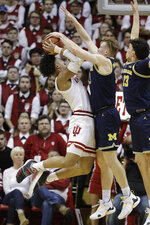 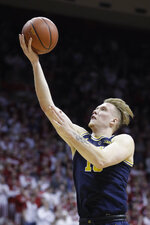 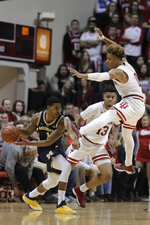 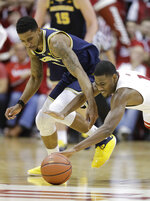 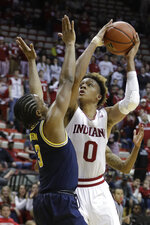 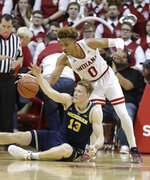 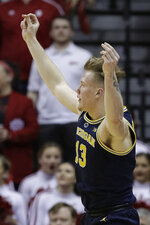 It was everything coach John Beilein hoped to see at Indiana.

The Wolverines' defense was virtually impenetrable, the offense was balanced and they delivered the knockout punch right from the start. Ignas Brazdeikis scored 20 points, Zavier Simpson added 12 and after scoring the first 17 points of the game, Michigan pulled away for a 69-46 victory.

"I don't think anybody realizes how you envy that situation where we got off to that great start, how difficult that is to manage when you get off to that great start because no matter what happens it's nothing to be up that much that early. Nothing," Beilein said. "To manage it and have your kids persevere through it is really good."

Michigan has won two straight since suffering its first loss, six straight over the Hoosiers and two in a row in Bloomington. The reason: Beilein's defense took full advantage of the struggling Hoosiers, who have lost six straight.

The Wolverines jumped to their enormous lead by forcing the Hoosiers into 10 consecutive missed shots, not allowing a point for more than seven minutes, not allowing a basket for nearly and never allowing the Hoosiers (12-8, 3-6) to get close enough to be a serious threat on a night public address announcer Chuck Crabb counted down the seconds on each possession at the south end of Assembly Hall because the shot clock was broken.

"Our team in general right now is soft, and we're also for whatever reason right now scared, and you can just tell by the way that we played," Hoosiers coach Archie Miller said. "The fight isn't there right now, and the confidence isn't there on either end of the floor to be able to capitalize on any type of opportunity that we have."

How ugly was it?

They crowd wildly when Indiana finally scored its first points on two free throws from Durham with 12:57 left and again when Durham scored their first basket with 10:15 left in the half. They trailed 33-18 at halftime, their lowest total in any half this season.

Indiana opened the second half with four straight baskets in the lane, closing to 38-29 on Phinisee's 3 with 16:47 left. But Michigan answered with a 12-3 spurt to make it 50-32 and the Hoosiers never got close again.

"We were really good after that (spurt) as well," Beilein said. "Our defense was so solid the entire night,"

Juwan Morgan finished with 16 points and 12 rebounds to lead Indiana.

Michigan: The Wolverines made a statement in Bloomington. Their suffocating defense is good enough to make another Final Four run and their balanced offense gives them enough options to make them tough to defend.

Indiana: Another sluggish start doomed the Hoosiers. Miller is desperately trying to mix and match lineups to find a third consistent scorer.

The Hoosiers honored the late Jimmy Rayl with a moment of silence before tip-off.

Rayl died Sunday at age 77. The two-time All-American was named the Hoosiers' MVP in 1962 and still holds the school's single-game record with 56 points, which he did twice — in January 1962 and February 1963.

Michigan: Jon Teske had 11 points and Charles Matthews had 10 points and 11 rebounds. ... Simpson had five assists, giving him 299 in his career. ... Beilein moved within one win of matching Johnny Orr's school record for Big Ten victories (120). ... The Wolverines had turnovers.

Indiana: Shot a season-low 27.6 percent from the field while going 3 of 20 on 3s and 11 of 20 at the free-throw line. ... Morgan also had four blocks and two steals while Romeo Langford had nine points and five rebounds. ... Morgan, Langford and Justin Smith were the only players with more than two baskets. Indiana has scored fewer than 60 points in three of its last four games.

Michigan: "We just want to stay focused, stay on the next game, do the things we can control, play together and we'll be in a great position," Simpson said.

Indiana: "I don't think any team is 23 points better than us," Morgan said. "I think we have a lot more fight in us than that. I think there's a lot of talent in that (locker) room. I'm angry about it. I know every guy in that room is. ... Everybody is embarrassed."