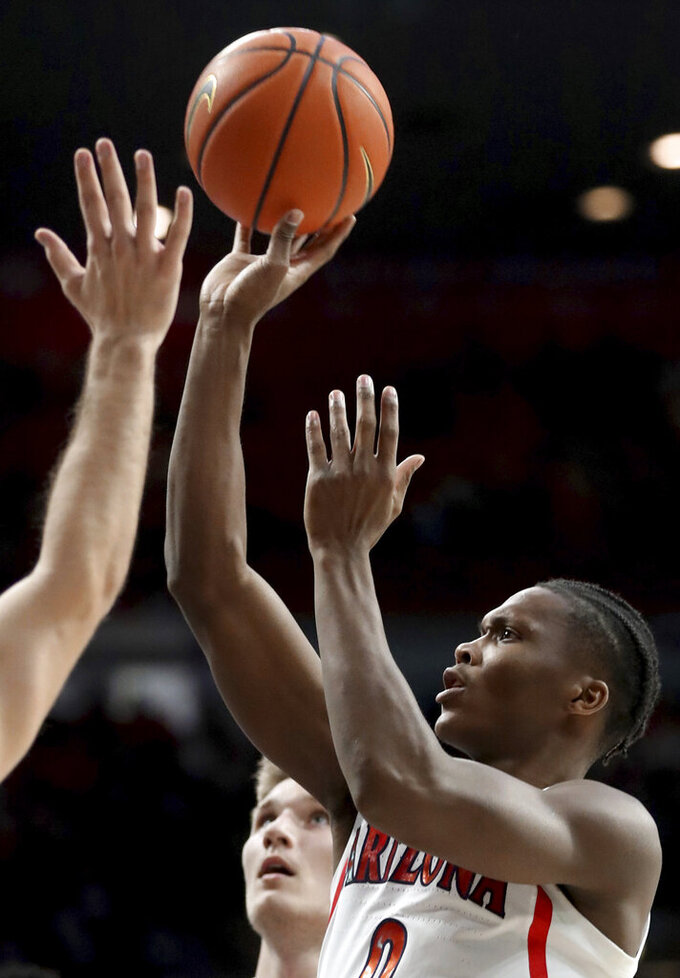 Arizona guard Bennedict Mathurin (0) shoots over the Utah defense in the first half of an NCAA college basketball game in Tucson, Ariz., Saturday, Jan. 15, 2022. (Kelly Presnell/Arizona Daily Star via AP) 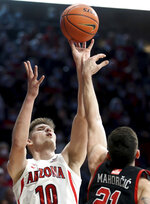 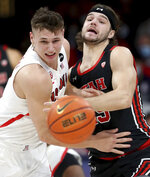 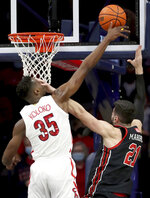 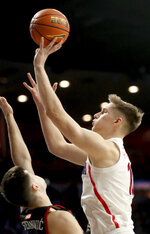 TUCSON, Ariz. (AP) — Azoulas Tubelis soared in for a one-handed slam, looked to the crowd and flashed his biceps. Next trip down, same thing.

On a night when Arizona struggled from the perimeter, Tubelis and the Wildcats showed some flex on the inside.

Tubelis scored 32 points, Christian Koloko added 16 points, and No. 6 Arizona dominated Utah inside for an 82-64 win on Saturday night.

“We're (the bigs) are always looking for each other, but it depends on how the other team is defending us,” Tubelis said. “The way they were guarding us, we had some open. It's not that hard. It's simple, really.”

Arizona’s offense was a bit off-kilter early with point guard Kerr Kriisa out after he was hurt “horsing around” with some teammates during the pregame meal.

The Wildcats (14-1, 4-0 Pac-12) struggled with turnovers early and shooting from the perimeter all night, going 3 for 18 from the 3-point arc. But they made up for it by pounding it inside.

Working a high-low post game much of the night, Arizona outscored Utah 56-28 in the paint, including 12 points during a 21-0 run that turned a close game into a blowout.

“I really did challenge those big guys,” Arizona coach Tommy Lloyd said. “I've coached this offense a lot of years and you've got to fight to get those high-lows. If you don't fight, they're not going to happen. You don't just get those out of thin air.”

Utah arrived in the desert already at a disadvantage inside with 7-foot junior Branden Carlson missing his second straight game with appendicitis.

The Utes (8-9, 1-6) were effective at slowing the Wildcats well into the second half, allowing them to hang around. The physical pounding of Arizona's big men took a toll and Utah struggled to take care of the ball, turning it over 20 times.

Both Gach scored 12 points to lead Utah, which has lost five straight.

“They just wore us down, specifically in the paint with their 4s and their 5s and their physicality,” Utah coach Craig Smith said.

Arizona has struggled with turnovers at times with Kriisa in the lineup and the guard's absence seemed to exacerbate it early against a Utah team that was able to slow the pace.

The Wildcats threw several wild passes early, including a couple that sailed into the crowd, and had 10 turnovers by halftime. Arizona also struggled to hit shots early, missing numerous open looks in half-court sets — 1 for 11 from 3 — as Utah controlled the tempo.

“They kind of surprised us with some rotation,” Lloyd said.

Tubelis had no trouble hitting shots. The Lithuanian big man repeatedly got to the basket on free drives for dunks or quick shots underneath. He had 16 points by halftime and Arizona finally found an offensive groove late, using a 12-4 run to go up 34-31 at halftime.

He kept dealing in the second half, with free runs for a couple of early dunks and scoring three straight baskets during the 21-0 run that put Arizona up 67-45.

Tubelis finished 14 of 24 from the floor, grabbed eight rebounds and dished out five assists.

“We just didn't have an answer for Tubelis,” Smith said.

Utah: The Utes were able to grind down the game to the pace they wanted early, but wore down against Arizona's size inside.

Arizona: The Wildcats showed off their versatility, winning in a rout despite struggling to get perimeter shots to fall.

Utah was effective at making it a tough night for Arizona leading scorer Bennedict Mathurin.

Led by Marco Anthony, the Utes heled the sophomore guard to 11 points — seven below his average — on 4-of-11 shooting.

The problem: they sometimes forgot about Arizona's other players.

“He still had an impact on the game because a few times we got caught on screen/roll defense where we were so concerned with Mathurin that we weren't in the right spot with the help side, so it ended up being a dunk or an and-one,” Smith said.

Lloyd didn't provide specifics on Kriisa's injury, but said he expects him to be back for next week's games.

“We had some guys horsing around at pregame meal and he got hurt,” Lloyd said. “I know it sounds crazy, but that's what happened.”

Utah: At Arizona State on Monday.

Arizona: At Stanford on Thursday.