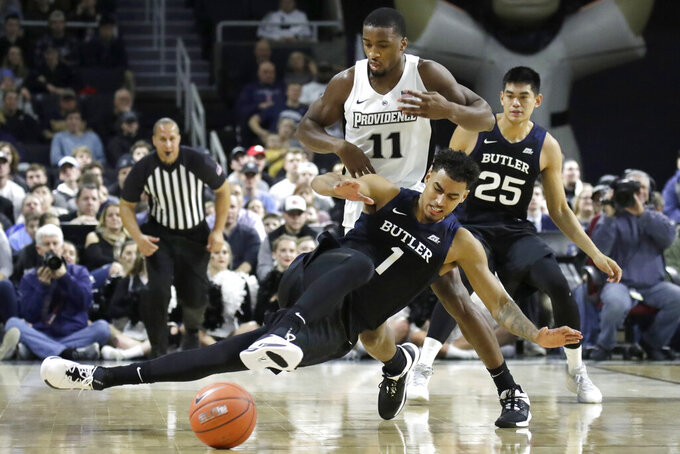 PROVIDENCE, R.I. (AP) — LaVall Jordan has Butler off to a 15-1 record and the No. 6 ranking in The Associated Press Top 25. Not even Brad Stevens' back-to-back NCAA tournament finalists did that.

So how does Jordan keep his players from thinking ahead to all the things the Bulldogs can accomplish?

“Have you seen the Big East?” Jordan said with a laugh on Friday night after Butler held Providence scoreless for the first 6 1/2 minutes and held on to beat the Friars 70-58. “These guys have earned everything they’ve gotten and just stayed in the pocket, stayed focused on getting better.”

Kamar Baldwin and Jordan Tucker scored 17 points apiece, and Bryce Golden had 14 points and nine rebounds to lead Butler to its sixth straight win. The Bulldogs (15-1, 3-0 Big East) have the highest AP ranking in the program's history and are off to their best start since the 2008-09 team led by Stevens, now the Boston Celtics coach, won 19 of its first 20 games.

“One thing coach tells us every day is that winning can make you soft,” Golden said. “So we just try to come in every day like our record is 0-0.”

Alpha Diallo scored 21 points for Providence (10-7, 3-1). The Friars missed their first 13 shots before David Duke crashed the lane for an off-balance, falling layup with 13:23 left in the first half. They finished the first half shooting 20% — hitting just 2 of 13 from 3-point range — and made 32% of their shots for the game.

But Butler wasn't able to create much distance, scoring just nine points in the opening span. PC quickly cut the deficit to four points before Butler began to pull away at the end of the half and went into the break leading 30-18.

Providence scored eight straight points to cut the deficit to 57-49 with four minutes left on a 3-point play by Maliek White. But they couldn't get any closer.

Butler: Having beaten Providence, the Bulldogs turn to Seton Hall — the only other unbeaten team in conference play. It's a stretch that will start to separate the best from the rest in the Big East.

Providence: The Friars picked up their first loss in the conference against the best team in the league. They'll need to shoot better to beat even the lesser opponents.

Butler had a 44-26 rebounding edge, spreading it out with Baldwin and Bryce Nze each grabbing seven and Tucker and Aaron Thompson getting six apiece.

“They kicked our (butts) on the glass, but we we also missed a lot of shots,” Providence coach Ed Cooley said. “Somebody's got to get them.”

Cooley lamented a schedule that had the Friars travel to Chicago last week to play DePaul on Saturday and then head up to Milwaukee to play Marquette on Tuesday, then return home early Wednesday morning. Butler had been off since playing Creighton at home last Saturday.

“That's a lot of rest. And we had two games to play, we traveled to both games and came home at 2 in the morning. That's rough,” Cooley said. “Our team was extremely tired. That wasn't the team I was accustomed to seeing over the last three weeks.”

“Butler did what they were supposed to,” he said. “They didn't play the right Providence College team tonight.”

PC guard A.J. Reeves left the game after getting hit in the head. Cooley said he wasn't sure how it happened.

“A.J.'s not feeling well. He was a little woozy in the locker room,” the coach said.