No. 6 Gonzaga withstands late run to beat No. 15 Arizona 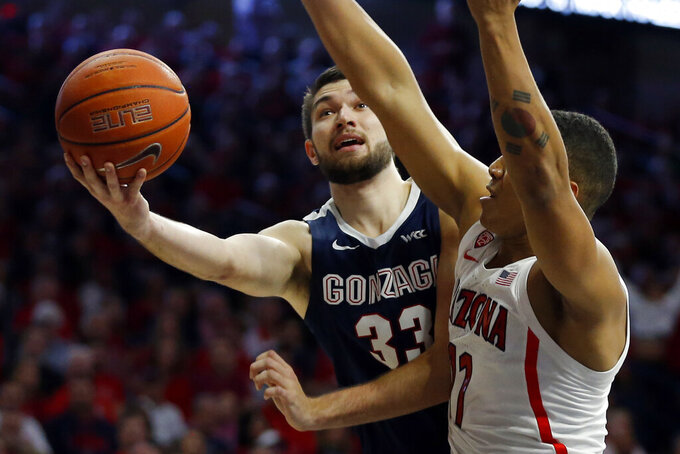 TUCSON, Ariz. (AP) — Sixth-ranked Gonzaga was at its efficient best at both ends of the floor through most of the second half, building a 15-point lead over No. 15 Arizona, ready to cruise to an easy victory over a tough road opponent.

Then the shots stopped falling. So did the free throws. Gonzaga committed a couple of key turnovers. Arizona had the crowd roaring with each basket. The lead was down to two in the closing seconds.

Any other team might have folded under the pressure. The veteran Zags kept their poise, pulling out a victory in one of college basketball's toughest road environments.

That's a sure sign of a veteran, resilient team.

“We're really resilient,” said Gonzaga's Joel Ayayi, who had 15 points. “We never quit. We never think the game's over until it's over. For us to win on the road in that type of atmosphere is a pretty good win."

Arizona (10-2) then went on a 15-2 run. Jemarl Baker scored on a driving layup to pull Arizona within 82-80, but Ryan Woolridge shut out the crowd noise and sealed it by hitting two free throws with 1.7 seconds left.

The Bulldogs won their 10th straight road game to extend the nation's longest streak. They did it with Killian Tillie in foul trouble most of the night before he limped off to the locker room with about seven minutes left.

“When you get a win here, I'm not going to worry about how we got to that point,” Gonzaga coach Mark Few said. “To get a win in this building, against that team, in this kind of environment is special.”

The Wildcats started strong with a boost from a boisterous McKale Center crowd and Zeke Nnaji's early energy.

After that, Arizona struggled from the perimeter and had numerous defensive breakdowns in the second half as Gonzaga pulled away, prompting Arizona coach Sean Miller to repeatedly point to his assistants and yell “Get him out of there!”

The Wildcats finally found some cohesiveness at both ends during the furious closing stretch.

Nnaji had 14 points and 17 rebounds — nine offensive — and Josh Green added 17 points for Arizona, which shot 8 for 30 from 3-point range.

“We just didn't shoot the ball like we're capable,” Miller said. “Some of it we just need to execute better, but we had some good ones. When you get good looks in the game, you've got to knock them in.”

Revved up by a the crowd, the Wildcats crushed the Zags on the glass early — a huge point of emphasis by Miller against Gonzaga's big front line. Arizona had nine offensive rebounds in the first eight minutes to build a nine-point lead and make up for an 0-for-7 start from 3-point range.

The Bulldogs clawed their way back as the Wildcats continued to clank from the perimeter — 1 for 15 from 3 — and led 35-34 at halftime. Arizona had 13 second-chance points on 12 offensive rebounds in the first half.

Gonzaga cleaned up its defensive glass issues to open the second half and used a 12-0 run to go up 54-45. The Zags continued to take advantage of Arizona's defensive miscues and went on an 8-0 run to push the lead to 69-55.

The Wildcats had one more run left, but ran out of time.

“When you look at it, we shot the ball poor,” Green said. “Those days are going to come. It's just one of those games.”

Arizona freshman Nico Mannion has been superb this season, both scoring and setting up teammates.

He did not have a great shooting night against Gonzaga.

Pressured by Woolridge all game, the Wildcats' point guard had seven points on 3-for-20 shooting, including 1 for 10 on 3-point attempts. He did finish with 10 assists and had a solid night defensively.

“He (Wooldridge) did an awesome job guarding him all night long,” Ayayi said. “It was a team effort, but a lot of it was just him guarding him by himself.”