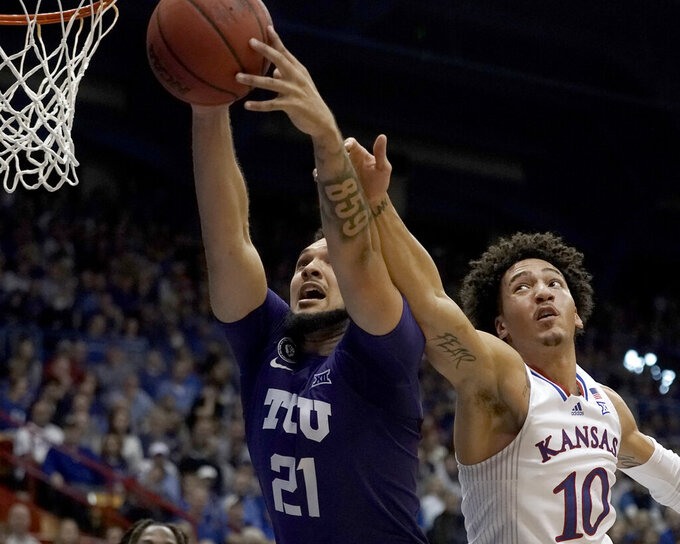 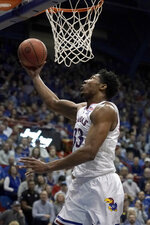 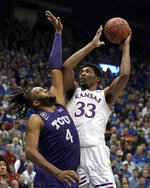 LAWRENCE, Kan. (AP) — Kansas coach Bill Self called point guard Dajuan Harris something unfit for print after his scoreless performance at TCU earlier this week served as a microcosm of the Jayhawks' entire listless performance.

Well, Harris and the rest of his team made sure Self wouldn't repeat those words Thursday night.

Ochai Agbaji scored 22 points, Harris showed some moxie by blocking Mike Miles' shot in the final seconds. and the sixth-ranked Jayhawks avenged their loss to the Horned Frogs two days earlier with a 72-68 victory that forged a tie with Baylor atop the Big 12 heading into their regular-season finales.

Christian Braun was 4 for 4 from the field and added 12 points, Harris scored 11 and David McCormack finished with 10 for the Jayhawks (24-6, 13-4), who will face No. 21 Texas on Saturday just hours before the third-ranked Bears face Iowa State to decide the conference title and the No. 1 seed in next week's Big 12 Tournament.

“That’s a hard team for us because they’re so athletic,” Self said, “and it negates us in a lot of ways. They can switch and they’re interchangeable. It’s a hard matchup for us.”

The Jayhawks were put in a win-or-else predicament Tuesday night when TCU handled them easily at home. But with a packed Allen Fieldhouse behind them, Self's crew regrouped Thursday night, overcoming a sluggish start to turn back the Horned Frogs (19-10, 8-9) in the makeup of a game postponed from Jan. 1 because of COVID-19.

Not that it was easy at any point.

The Jayhawks were clinging to a 71-68 lead when the Horned Frogs forced a shot-clock violation with eight seconds left in the game. Miles tried to go to the rim for a layup but was blocked by Harris, and the ball landed in the hands of teammate Jalen Wilson, who made one of two free throws to put the game away.

“We said be ready to get a 3 but if we had a layup to go,” TCU coach Jamie Dixon said. "I like our best guy going to the rim with that much time left.”

He just didn't expect Harris to be there with a chip on his shoulder.

“We watched the TCU game from last game (and) coach called me something I didn't like,” Harris said with a smile, “so I had to show him I wasn't that word. I can't even say it.”

The Jayhawks never showed a whole lot of fight Tuesday night, when they allowed TCU to dictate just about everything — the tempo, the style, the final score. But at least Mitch Lightfoot showed a little Thursday night, when their senior got into a jawing match with Eddie Lampkin Jr. and proceeded to throw down an ally-oop dunk behind his back.

Naturally, the jawing resumed and Lightfoot was hit with a technical foul. But that only served to ramp up the energy level inside Allen Fieldhouse, where the two teams had played to a 35-all draw by the halftime buzzer.

It took foul trouble to slow the Horned Frogs down in the second half.

Miles, who scored 19 in the win at Schollmaier Arena, took a seat with four fouls with 10 minutes to go. Lampkin joined him on the bench when the bruising forward picked up his fourth with just over seven minutes to go.

Kansas finally pulled ahead 60-59 when Agbaji made a couple of free throws. Then, the Big 12's leading scorer stepped in front of Baugh's pass and went the length of the floor for a dunk that fired up the mostly mask-less crowd.

Braun eventually capped an 11-2 run with a 3-pointer that gave Kansas a 69-61 lead with 2 1/2 minutes to play, and the Jayhawks held on the rest of the way to remain tied atop the conference standings.

“They were the more aggressive team just overall,” Braun said of the matchup Tuesday night. “We knew we had to punch them back. They punched us at their house, we had to respond. We knew this game was really important for our goals.”

TCU was just 4 of 16 from beyond the arc after going 3 for 15 in the matchup in Fort Worth, Texas. But unlike that game, when the Horned Frogs compensated with just seven turnovers, they had 15 of them on Thursday night.

Kansas also struggled from beyond the arc, and it was outrebounded for the second straight game by TCU. But the foul line proved to be the difference, where the Jayhawks were 18 of 23 and made a couple crucial ones down the stretch.

TCU wraps up the regular season Saturday at West Virginia.