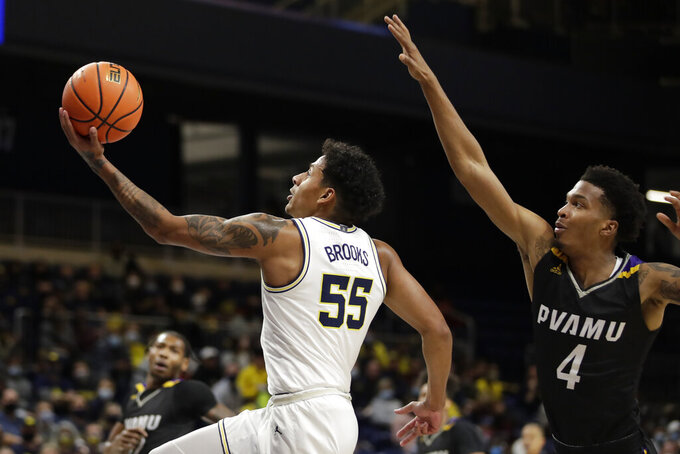 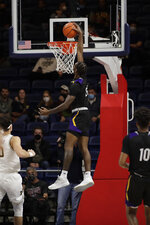 Hunter Dickinson scored 11 points and added 10 rebounds for the Wolverines (2-0), who improved to 16-2 in regular season nonconference games under third-year coach Juwan Howard.

“We’re playing Michigan, and that’s a daunting task,” Panthers coach Byron Smith said. “If there’s five teams in the country better than them, show them to me.”

William Douglas had 15 points for the Panthers (0-3) in an event organized by Coaches vs. Racism, a nonprofit dedicated to ending systemic racism in sports. Both teams toured the National Museum of African American History and Culture on Friday.

“That right there was a highlight moment,” Howard said.

Prairie View, an HBCU located about 50 miles northwest of Houston, was picked to finish second in the Southwestern Athletic Conference this season. The Panthers are 44-5 in the SWAC over the last three seasons.

But they don’t often deal with a player like the 7-foot-1 Dickinson, a sophomore who grew up just across the Potomac River in Alexandria, Va. He scored the game’s first seven points, and the Wolverines needed less than seven minutes to extend their lead to double figures for good.

“We won’t really see size like that in the SWAC,” Douglas said.

Michigan, which led 42-23 at halftime, held Prairie View to 27% shooting from the floor, including just 19.4 percent after the break.

“I love the fact that our guys are really buying into that defense matters and that details are the most important thing,” Howard said.

Prairie View A&M: This was an opportunity for the Panthers to play a televised game and measure themselves against a national title contender. It also fit in with the program’s overall scheduling philosophy: Prairie View plays its first 12 games away from campus and won’t play a home game until Jan. 1.

Michigan: This was far less stressful than the Wolverines’ opener, when they led Buffalo by five with six minutes to play before pulling away for an 88-76 victory. Given the talent assembled on Howard’s roster, it is likely to be the first of many routs for Michigan this season.

With No. 4 Villanova’s overtime loss at No. 2 UCLA and the top-five clash between No. 5 Texas and No. 1 Gonzaga later Saturday, Michigan will have a chance to climb into the top five after its two victories this week.

Both coaches vouched for the first edition of the Coaches vs. Racism event, though Smith did have one regret.

“The only thing I’m disappointed about is I challenged this guy to a game of one-on-one, and he declined,” Smith said as Howard sat nearby and laughed. “I need you guys to write that down. The story needs to read that Juwan ducked Byron. I needed to get one victory here.”

Michigan: Hosts Seton Hall on Tuesday. The teams have only met twice before, both in 1989.