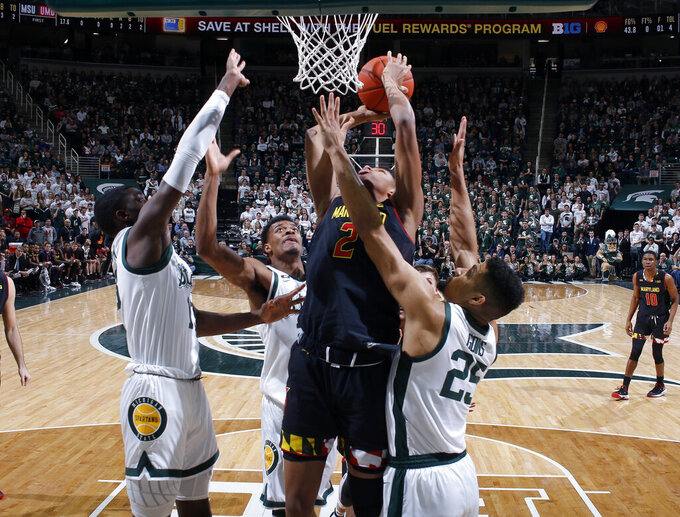 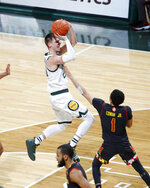 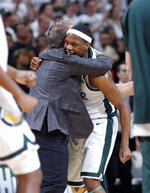 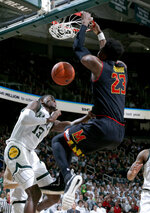 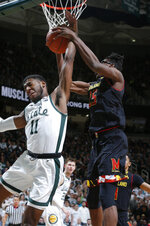 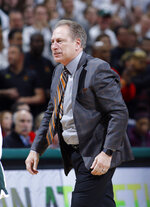 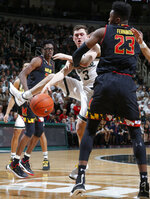 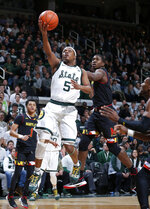 EAST LANSING, Mich. (AP) — Aaron Henry made the most of his opportunity to play in place of injured starter Joshua Langford.

The freshman forward had a season-high 12 points, helping No. 6 Michigan State beat No. 13 Maryland 69-55 on Monday night with balanced offense and stifling defense.

"The Henry kid, he's really good," Terrapins coach Mark Turgeon said. "Great defender, hard to box out. And, he makes shots. That was a key."

The Spartans (17-2, 8-0 Big Ten) have won 12 straight this season and are in sole possession of first in the conference. They have won a school-record 20 consecutive Big Ten regular season games dating to last year. The run ties the fifth-longest winning streak in Big Ten history and is conference's longest since Illinois won 25 straight during the 2003-04 and 2004-05 seasons.

"I don't think they give a trophy for it," Michigan State coach Tom Izzo said.

Cassius Winston and Kenny Goins each scored 14 points while Matt McQuaid and Xavier Tillman had 10 points apiece for the Spartans.

The Terrapins (16-4, 7-2) had a shot to move into first place in the conference, but couldn't extend their seven-game winning streak.

"We couldn't guard them," Turgeon said. "We went a few possessions with zone, but that's not who we are.

"We let our offense affect our defense."

The Terrapins connected on just 34.4 percent of their shots and matched their season low against the Spartans. They shot 58 percent of in their previous game, a 14-point win at Ohio State.

The Spartans missed their first six shots then surged to an 18-6 lead while holding Maryland to 3-of-18 shooting.

Maryland started making shots to pull into 20-all tie.

"I thought we could win at that point," Cowan said. "We just didn't get enough stops."

Winston, who had just five points in the first half, opened the second half with a 3-pointer to put the Spartans ahead by 14. He had a three-point play a couple minutes later, giving Michigan State a 43-26 lead. Goins made a 3-pointer to push the lead to 22 with 15:28 left.

The Terrapins rallied to cut their deficit to 11 with 5:42 remaining, but couldn't get closer.

"I didn't think it was the prettiest game, but I was really impressed by our defense," Izzo said.

Maryland: Cowan crumbled against Michigan State's defense, which included a player guarding him closely while a post player lurked nearby in case he got into the lane. He had scored 20-plus points in four straight games and was averaging 17.9 points entering the game before being held nearly 11 below his average on 3-of-12 shooting. Cowan made a shot early in the game then was held scoreless for 26-plus minutes.

"They really did a good job of closing the gaps," he said. "And, we just didn't make plays and that made their defense look a lot better."

Michigan State: In its only home game during a five-game stretch, the Spartans showed they can win without Langford and basically without struggling starter Nick Ward. Langford missed his sixth straight game with an ankle injury. Ward was held scoreless for the first time in his career, limited to 14 minutes at least in part because he was in foul trouble. Kyle Ahrens, who has started seven games this season, returned from a two-game absence with a back injury and made a reverse layup to help hold off Maryland in the second half.

Izzo said Langford will miss at least one more game.

"He shot some (Sunday) and that was encouraging," Izzo said. "Now that the boot has been taken off periodically, now that he can work out a little bit, we're starting to see some progress.

Langford averaged 15 points in 13 games this season, including an 18-point performance in the opening loss to No. 9 Kansas and a career-high 29 points in a win over Texas later in November.

Charlotte Hornets rookie Miles Bridges , who left Michigan State after his sophomore season, returned to the Breslin Center to kiss the school's logo on the court before the game. The program's departing seniors have done that since Shawn Respert did it in 1995. Izzo wants his former players, who enter the NBA draft early, to come back to be a part of the tradition.

Michigan State: Plays at No. 19 Iowa on Thursday night and at Purdue on Sunday afternoon.