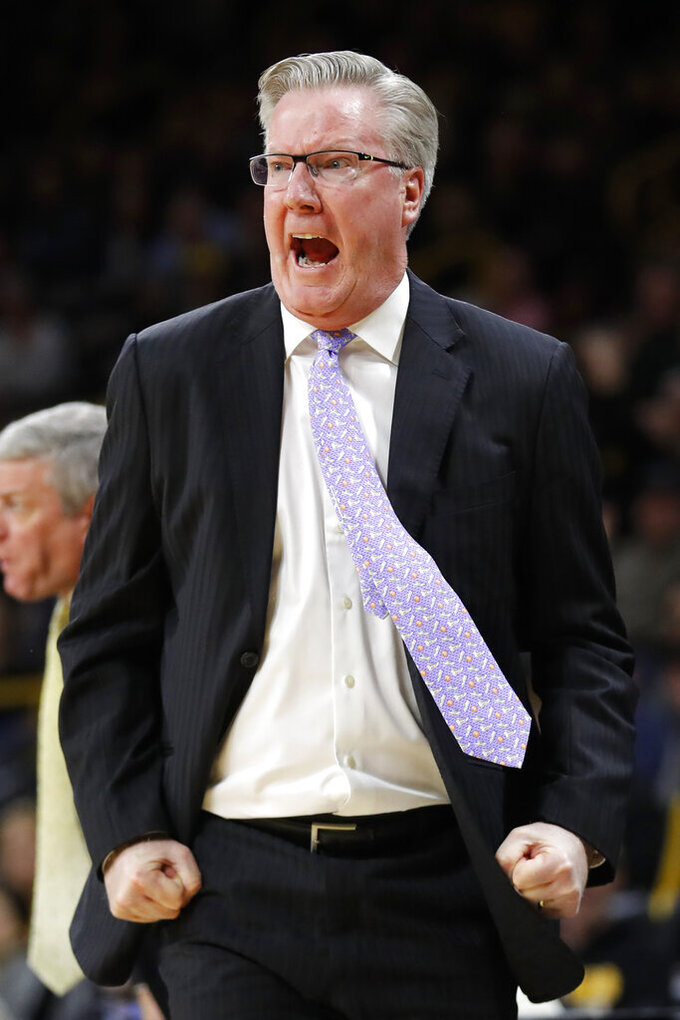 Iowa coach Fran McCaffery reacts to a call against his team during the first half of an NCAA college basketball game against Michigan State, Thursday, Jan. 24, 2019, in Iowa City, Iowa. (AP Photo/Charlie Neibergall)

IOWA CITY, Iowa (AP) — Iowa had the crowd rocking and plenty of momentum on its side.

But sixth-ranked Michigan State had the necessary toughness, blowing past the upstart Hawkeyes in a vintage Tom Izzo performance on the road.

Cassius Winston scored 23 points, Nick Ward had 21 points with 10 rebounds and the Spartans beat No. 19 Iowa 82-67 on Thursday night, extending their winning streak to 13 games.

"What I've been most impressed with with my team is ... they're responding to things. They don't take things personal," said Izzo, the longtime Michigan State coach. "I was pleased with how we finished the game."

Tyler Cook scored 11 points in the first four minutes of the second half to give Iowa a 50-42 lead. But he was soon matched by the unflappable Winston, who hit three 3s in a row to help the Spartans retake the lead, 53-50.

Ward's three-point play pushed the run to 14-0 and put Michigan State ahead 56-50 — mere moments after it appeared Iowa might pull away.

McQuaid's 3 and three more points from Winston, this time at the foul line, gave the Spartans a 66-52 edge.

"That kid is a special player," Iowa coach Fran McCaffery said of Winston. "He makes big shots in very important situations. He's really consistent at doing that. ... That's why they are where they are."

Luka Garza scored 20 points and Tyler Cook had 17 for Iowa (16-4, 5-4), which won its previous five games. The Hawkeyes entered leading the nation in free throw attempts and makes, but hit just eight.

Michigan State went 20 of 21 from the line, and Ward hit all seven of his tries.

"The two things that we needed to do was to defend without fouling ... and Nick Ward, who's come so far with his free throw shooting, for us to go 20 of 21, I think those two things along with some pretty good defense" were crucial, Izzo said.

Michigan State: This is how teams win conference titles in tough leagues. The Spartans were on the road in a very hostile gym playing a team they embarrassed 90-68 in East Lansing on Dec. 3, and they still found a way to pull it out. It was quite the unintentional foreshadowing that Iowa was playing Ariana Grande's "Thank U, Next" when Michigan State came out for layup drills, because that's exactly how it went down in the second half. "A lot of constructive criticism went on," Ward joked about the halftime scene in the Michigan State locker room. "Yeah, I'll call it that."

Iowa: The Hawkeyes blew a golden opportunity to knock off one of the best teams in America. But Michigan State is one of the best teams in America in part because of its resilience, and the Spartans showed plenty of that with their second-half rally. The Hawkeyes now know exactly how they would match up with a Final Four contender, and they didn't get the answer they were hoping for. "We have to work on, once we're getting consecutive baskets instead of trading baskets, being able to turn a six- or eight-point lead into an 11- or 14-point lead," Iowa's Nicholas Baer said.

Cook and Garza, Iowa's big men, grabbed just nine combined rebounds. The Hawkeyes, typically pretty strong on the boards, got outrebounded 42-26. ... The Spartans outscored Iowa 51-32 in the second half. ... Michigan State turned it over 19 times. ... The Hawkeyes, who went 15 of 21 on 3s in Sunday's rout of Illinois, were just 5 for 24 beyond the arc.

"We did something that you have to do in basketball. We tried to guard him, you know? It was a joke. I mean, I could have scored in there," Izzo said about adjusting to Cook after his scoring binge. "We tried to dig a little more, surround him a little more, make it a little harder for him to get it in. Put a little more pressure on the ball."

Michigan State plays at Purdue on Sunday, its fourth road game out of five.

Iowa plays at Minnesota on Sunday.