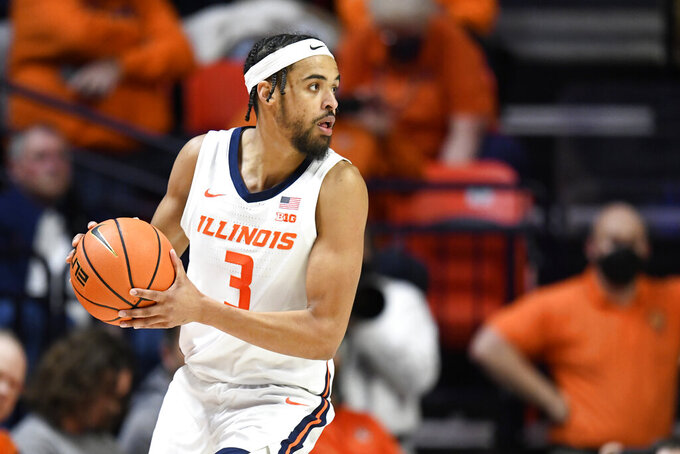 FILE - Illinois' Jacob Grandison looks to pass during the second half of the team's NCAA college basketball game against Northwestern on Feb. 13, 2022, in Champaign, Ill. Duke’s newcomers include a pair of Big Ten transfers in Grandison (Illinois) and Ryan Young (Northwestern). (AP Photo/Michael Allio, File)

DURHAM, N.C. (AP) — A season of massive change has arrived at seventh-ranked Duke.

Jon Scheyer has taken over a program led by a Hall of Fame coach who to many was the face of college basketball in Mike Krzyzewski. And there's a nearly complete roster overhaul with 11 new players after the latest wave of early NBA departures from last year's Final Four team, including No. 1 overall pick Paolo Banchero.

“Everyone has a first time for something in their lives," freshman 7-footer Kyle Filipowski said. "There might be some pressure with that. But there's pressure in every situation you're put with. It's just how you really handle that ... and not let the outside noise get to you.”

And there will be plenty of that.

Duke has long faced possession-by-possession scrutiny as a blueblood program, from its five NCAA championships to Krzyzewski's standing as the winningest coach in college basketball history. But that will be higher this year as the first-time head coach proves whether he can keep the Blue Devils among the national elite.

“He's done an excellent job, I'm telling you, man," said associate head coach Chris Carrawell, a former player and coach under Krzyzewski who has remained on the staff for the transition.

Scheyer was the leading scorer on Duke's 2010 NCAA championship team, and he spent the past eight seasons on Krzyzewski's staff. He was designated as Krzyzewski's successor in June 2021 and spent last season preparing for this moment as his mentor's side.

He's been undeterred by the challenge ahead.

“Really throughout the entire year, not only was I coaching at the highest level I could in the role assisting Coach K," Scheyer said, "but I also realized: here are my non-negotiables as a coach, here's the things we're going to work on. So as we started the season, I already knew the first two weeks, we were doing defense.”

He was a key part of Duke’s recruiting success in recent years and landed the nation’s No. 1 recruiting class for his debut season, including three of 247sports’ top four overall prospects in 7-foot-1 Dereck Lively II (No. 1), 6-7 wing Dariq Whitehead (No. 2) and Filipowski (No. 4).

The way they see it, they're part of a new era, too.

“I feel like it played a big role in me coming to Duke, just knowing it was going to be a lot of pressure on (Scheyer) in his first year,” Whitehead said. “I told my mom that I look forward to embracing that with him and taking on this challenge of him being a first-year head coach.”

The Blue Devils are picked to finish second behind No. 1 North Carolina in the 15-team ACC. And Scheyer has put together a roster capable of contending for a return to the Final Four.

Duke's incoming class includes Australian guard Tyrese Proctor, who had committed to Duke for next year's class before reclassifying to play now. He attended the NBA Global Academy in Canberra designed to train elite international prospects.

“I think it was just knowing that I thought I proved as much as I could in Australia, so I just wanted to take the next step,” Proctor said of his reclassification.

Scheyer has been clear that he thinks this year’s team could be an “elite” defensive team with its size and length. Lively's mobility and rim protection certainly offer a great starting point inside.

Scheyer said the coaches have “talked about how to maximize what he can do on the defensive end especially” to take advantage of his versatility.