No. 7 Duke's visit to Virginia highlights ACC's week ahead 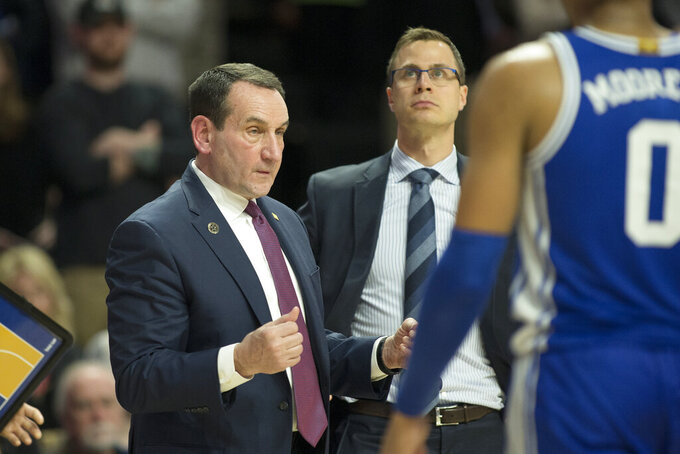 Here are some things to watch for in ACC play this weekend:

No. 7 Duke at Virginia. The Blue Devils will be looking to bounce back from their double-overtime loss at Wake Forest on Monday night in their only regular season meeting with the Cavaliers. Virginia has won five straight and locked up no worse than fourth place and the final double bye in the ACC Tournament with it's victory Wednesday night at Virginia Tech. It will be a game of contrasts with the Blue Devils featuring one of the nation's top scoring offenses at better than 83 points per game and the Cavaliers boasting the nation's stingiest defense, allowing fewer than 53 ppg. Duke won both meetings last season and has won its last three visits to John Paul Jones Arena.

Kihei Clark. Virginia's sophomore point guard has taken some heat from coach Tony Bennett for being sloppy with the ball at times, but even Bennett has said that he's asking lot of player in just his second season. The coach wants Clark to provide leadership and steadiness for his team. Clark has responded and is emerging as a more critical piece of the Cavaliers as the season progresses. Remembered for his pass to Mamadi Diakite for a game-tying shot against Purdue in last year's Elite Eight, Clark as been Virginia's leading scorer in two of its past three games and hit the game-winning 3-pointer in Wednesday night's victory at Virginia Tech.

Only four of the ACC's 15 head coaches having winning road records in league play for their career, and one of them, Louisville's Chris Mack (10-8), is in just his second season. The others are Mike Krzyzewski (188-120), Roy Williams (89-54) and Tony Bennett (58-38). ... The league's three home teams — Wake Forest, Georgia Tech and North Carolina — all won on Tuesday night. On Wednesday night, the league's three road teams — Syracuse, Notre Dame and Virginia — all won. Road teams are 54-75 (41.8%) in the ACC this season.

Duke will close out the regular season on Sunday at North Carolina. The Blue Devils (17-11, 11-6) had their six-game winning streak end Thursday night in a 70-56 loss at Virginia Tech, but their win streak included their first road win against a top 10 team since 2015 at North Carolina State on Monday. While Duke is now in a three-way tie for third with No. 19 Florida State and the Hokies, the Tar Heels (16-12, 7-10) are in a three-way tie for ninth with Wake Forest and Notre Dame.