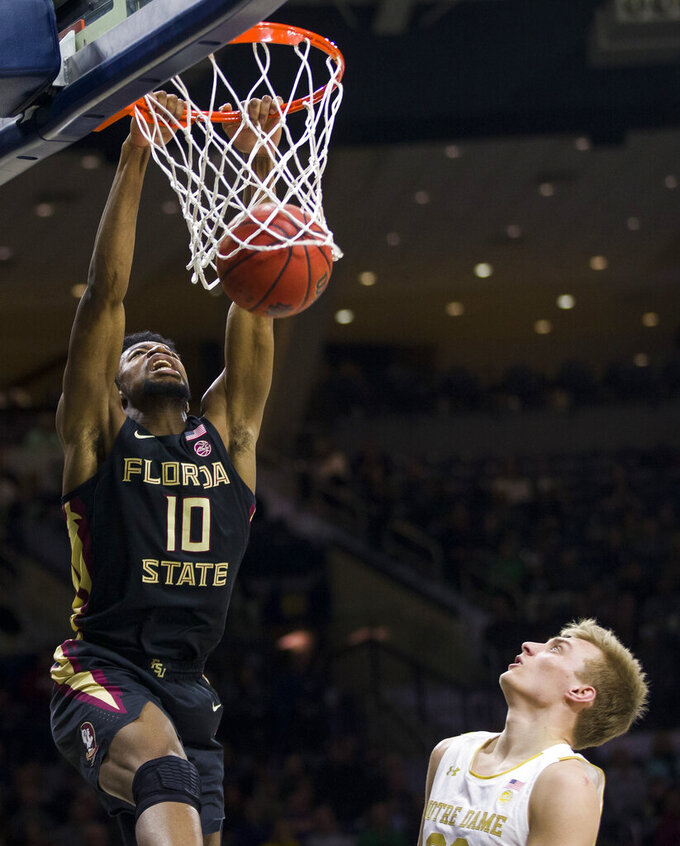 The No. 7 Seminoles were ahead in the end, earning a 73-71 comeback victory over the Fighting Irish.

Forrest’s basket gave the Seminoles just their second lead all night. Their other lead was 5-4 in the opening minutes.

“We only led for 20 seconds the entire game,” Florida State coach Leonard Hamilton said. “Not very many times you’re gonna win a game on the road in the ACC only leading for 20 seconds in the game.”

“He had a look in his eye that we felt he was determined to put us on his shoulders," Hamilton said. “I can’t say enough about his focus and determination.”

Prentiss Hubb’s half-court heave for the Fighting Irish (18-12, 9-10) as time expired hit the back iron. Hubb led Notre Dame with 24 points, scoring 19 in the first half.

John Mooney had his NCAA-leading 25th double-double with 16 points and 11 rebounds, but did not score in the second half.

Dane Goodwin also scored 16 points for the Irish, 14 of those coming after halftime.

“We had opportunities, we had good looks, we had stuff around the bucket that didn’t go in,” Notre Dame coach Mike Brey said after his team scored just 10 points over the final 10 minutes. “You’re gonna have to score more to beat them, gotta try to get it to 80. I thought we were on our way, but they’re just hard to deal with.”

The Irish had won five straight at home.

Florida State: The team stayed in control of its destiny in pursuit of the No. 1 seed in next week’s ACC Tournament. A win over Boston College on Saturday assures at least a tie with Louisville for the conference title. The Seminoles would hold the seeding tiebreaker because they beat the Cardinals twice.

Notre Dame: The only hope for the Irish of making the NCAA Tournament is probably to win the ACC tourney, earning an automatic bid. They dropped to 0-6 against ranked teams in their last opportunity of the regular season. Notre Dame has lost 21 straight times to ranked opponents over the last 29 months.

Though the Seminoles trailed most of the way, they never went through a protracted drought and were not prone to a series of mistakes at any point.

“Hopefully this will be the type of game that we can, from an emotional standpoint, grow and mature more," Hamilton said.

After that previous game, Brey expressed frustration over the officiating. That led to Notre Dame being fined $20,000 for a violation of the ACC’s sportsmanship policy.

After this one, Brey put on a courtside headset for a postgame radio interview to take place over the public address system, as is typical after games. He later changed his mind and walked away without comments.

A bit later, Brey did conduct a postgame press conference away from the arena floor. He did not address officiating.

For the Irish, it was their 11th game this season decided by three or fewer points. They dropped to 4-7 in those games.

Florida State: The Seminoles will be shooting to finish the season 16-0 at home when Boston College visits on Saturday.