No. 7 FSU, No. 10 Louisville go for ACC regular-season title 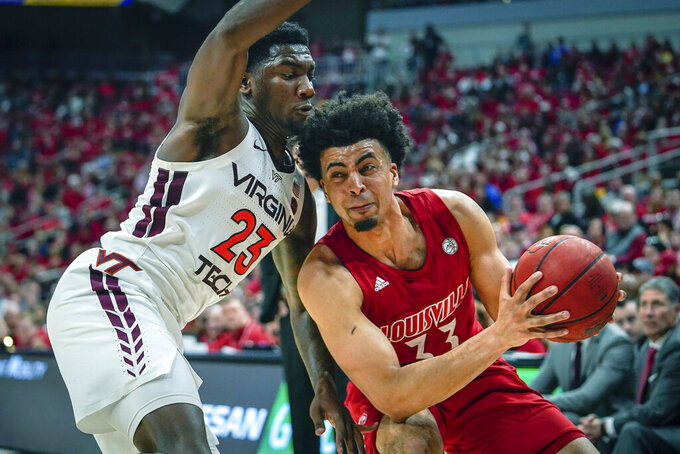 GAMES OF THE WEEKEND

No. 10 Louisville at No. 22 Virginia and Boston College at No. 7 Florida State. The regular-season title comes down to two games starting 30 minutes apart Saturday afternoon, with both FSU and Louisville tied and able to clinch a share of the title with a win. The first game has the Cardinals (24-6, 15-4) visiting the reigning national champion Cavaliers (22-7, 14-5), who have won seven straight. Then there's the Seminoles (25-5, 15-4) hosting the Eagles (13-17, 7-12), with FSU clinching the No. 1 seed for next week's tournament with a win by virtue of sweeping the regular-season set with Louisville. And for FSU, a shared or outright title would be its first regular-season championship in any league since winning the Metro Conference in the 1988-89 season, according to the school.

The ACC Tournament opens Tuesday in its return to its longtime home. Greensboro, home to the league headquarters, has hosted the tournament a league-high 26 times, though it hasn't hosted since Notre Dame's championship run in 2015. Of note, the tournament will only feature 14 of the league's 15 teams, with Georgia Tech sitting out due to an NCAA postseason ban for rules violations. That means only two games on the first day featuring the last four seeds.

Duke point guard Tre Jones will have another chance for a big rivalry moment against North Carolina on Saturday. The sophomore had 28 points and the overtime-forcing buzzer-beater in the first meeting. That shot — coming after he ran down the long rebound on his own intentionally missed free throw — capped a wild comeback before Duke won on Wendell Moore Jr.'s final-play putback in OT.

The ACC is KenPom's fifth-rated league behind the Big Ten, Big 12, Big East and Pac-12, with the league's efficiency score used for those rankings as its lowest since expanding to 15 teams for the 2013-14 season. ... Georgia Tech has reached 10 ACC regular-season wins for the first time since the 1995-96 season when Stephon Marbury was a star freshman. ... Virginia Tech's Wednesday win against Clemson was only its second since Jan. 22. ... Pittsburgh has completed its regular-season schedule with seven straight losses since last winning Feb. 8. ... There have been a record-tying 13 overtime games in league play, with road teams winning 10. ... UNC's Garrison Brooks had 25 points in Tuesday's win against Wake Forest, making him the first Tar Heels player to score 25 or more in three straight games since Tyler Hansbrough in 2008.

The ACC Tournament opened Wednesday and runs through Sunday with fourth-ranked Louisville as the clear favorite. The Cardinals (27-3, 16-2) won the regular-season race outright for the first time and are pursuing their second tournament title. The biggest challenge figures to come from No. 10 North Carolina State, though third-seeded Duke has been hot for the past month and fourth-seeded Florida State is ranked No. 22 in the AP Top 25. After Sunday's title game, the teams must wait until March 16 to find out their NCAA Tournament fates.