No. 7 Michigan plays at No. 9 Michigan State for B10 title 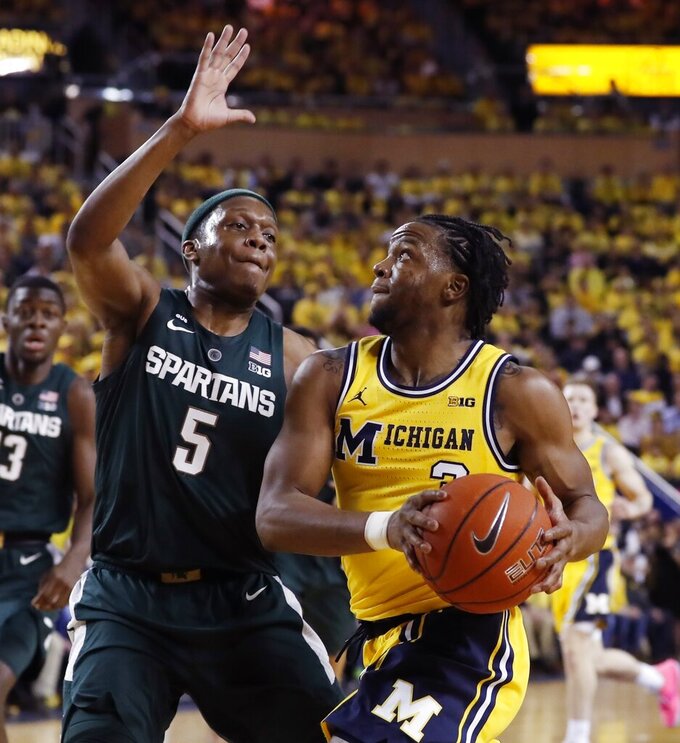 FILE - In this Feb. 24, 2019, file photo, Michigan guard Zavier Simpson (3) is defended by Michigan State guard Cassius Winston (5) during the first half of an NCAA college basketball game, in Ann Arbor, Mich. No. 9 Michigan State hosts No. 7 Michigan in their Big Ten regular season finale with at least a share of the conference title at stake. (AP Photo/Carlos Osorio, File)

Tom Izzo has witnessed them all on the sideline as a head coach and assistant. And he thinks the next one is among the biggest in the arena's history.

Clearly, there's more than provincial interest in the matchup, and the winner gets more than bragging rights.

The ninth-ranked Spartans (24-6, 15-4 Big Ten) will play seventh-ranked Michigan (26-4, 15-4) with at least a share of the Big Ten title at stake along with seeding implications for the conference and NCAA tournaments.

"This is the championship we want to win, but I'm not going to put it as this is the greatest game of all time," Michigan coach John Beilein said. "It's a great game between two really storied and solid and clean programs."

Both teams have a shot to share the Big Ten championship because No. 11 Purdue was upset at Minnesota. If the Boilermakers are stunned at Northwestern on Saturday afternoon, Michigan and Michigan State will be playing for an outright championship on ESPN right after No. 3 North Carolina hosts No. 2 Duke.

"It might be one of the best nights of basketball for the year," Izzo said.

The rivals will meet less than two weeks after Michigan State beat the Wolverines 77-70 on their home court.

"They came here and got a 'W' in front of our fans," Michigan forward Isaiah Livers said. "Now, it's time to go in front of their fans and get a 'W.' I think it's perfectly set up for us."

The Spartans do not expect standout forward Nick Ward to be on the court nearly three weeks after having surgery on his left hand, but he has begun practicing on a limited basis. They're hoping forward Kyle Ahrens is healthy enough to contribute after a lingering back injury kept him out a game earlier this week.

Michigan will make a decision close to game time about whether guard Charles Matthews will be in the lineup for the first time since an ankle injury limited him against Michigan State.

"He'll go through warmups and he'll let us know how he feels," Beilein said.

Player of the year candidate Cassius Winston was slowed in a win earlier this week over Nebraska with knee tendinitis, but is expected to be rested and ready to go against the Wolverines. He had 27 points and eight assists at Michigan, winning the point guard matchup against Zavier Simpson after struggling against him previously.

Winston can't wait for the rematch.

"It's all on the line Saturday: Senior Night, championship, against our rivals," he said. "You can't draw it up any better than that. This one's for all the marbles."

Michigan State will recognize its outgoing seniors, Kenny Goins and Matt McQuaid , a pair of players coming off career highs in scoring. Goins has become a key player in his fifth year, getting rewarded for turning down scholarship offers to be a walk-on for Izzo, who later gave him a scholarship. McQuaid chose to be a Spartan after committing to play for former SMU coach Larry Brown.

"With a championship at stake, that just adds that much more," Goins said. "There's a lot going on. We want to send the seniors out right and no one wants to lose to Michigan."