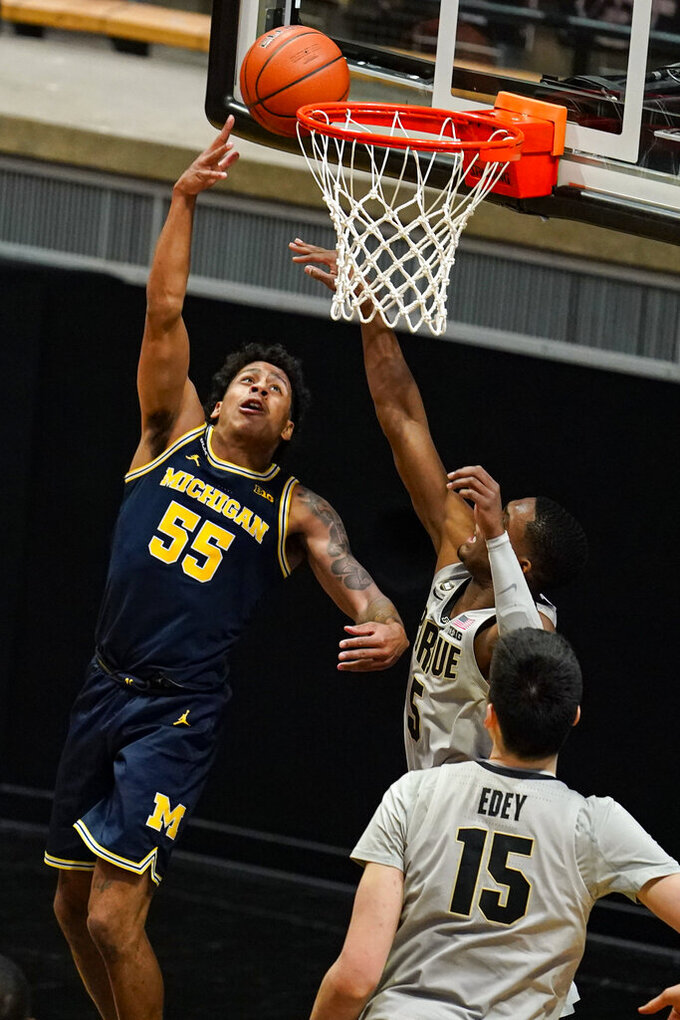 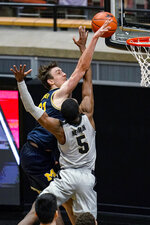 On a night Isaiah Livers matched his season high with 22 points and Eli Brooks added 11, the seventh-ranked Wolverines used a staunch defense to pull away from Purdue 70-53.

“They all did a great job. It was not easy because Trevion (Williams) is one of the best bigs in this conference and also one of the best in the country," Howard said when asked specifically about Michigan's post play. “I know tomorrow they’re going to wake up sore because they earned it. This was an old-school, Big Ten type of game. The Big Ten has always been a physical conference and tonight’s game was really about physicality."

By winning their fifth straight in the series, the Wolverines (13-1, 8-1 Big Ten) maintained their stranglehold on the conference lead.

But this one came with some trepidation after Purdue's top 3-point shooter, Sasha Stefanovic, tested positive for COVID-19. A second test Wednesday confirmed the initial result.

Boilermakers coach Matt Painter explained that the team's protocols required Stefanovic to wear a mask on their bus trip and plane ride back from Ohio State earlier this week and that the senior guard was not around anyone else after he returned to campus. No other players tested positive and after Howard said he spoke with his players individually, the game was played.

Livers, for one, said he had was nervous about playing — until being told of the precautions Purdue took.

And without Stefanovic on the perimeter, the Wolverines took full advantage by packing it in and daring Purdue to win from the perimeter.

While Trevion Williams led the Boilermakers with 14 points and 11 rebounds, he didn't have enough help from the supporting cast as Purdue's four-game winning streak ended. The Boilermakers (11-6, 5-4) shot just 32.1% and missed all six 3-point attempts in the first half as Michigan jumped to a 34-21 lead.

“We didn’t have great guard play tonight. It wasn’t like our interior guys played well, either," Painter said. “But we didn't have good guard play. We had 14 turnovers and it felt like it was 24.”

Purdue made its first two 3s in the second half and quickly cut the deficit to 42-3, but the Wolverines answered with six straight points and never allowed the Boilermakers to get close again.

Michigan: Yes, the Wolverines have one of the nation's highest-scoring offenses. But when Michigan's shooters have an off-night, their defense is more than capable of having an impact. It's a combination few teams possess — and a reason the Wolverines are a legitimate Final Four contender.

Purdue: While the Boilermakers had been the Big Ten's hottest team, they sputtered without Stefanovic. Big Ten protocols will force Stefanovic out of at least the next two games, and coach Matt Painter needs to find a solution — fast.

With wins over Maryland and at Purdue this week, the Wolverines won't go anywhere but up in the Top 25. The bigger question is whether recent wins at Michigan State, Ohio State and Indiana will be enough to propel the Boilermakers into the rankings for the first time all season.

Michigan: Livers has had six straight games in double figures. He also had 10 rebounds and three assists... The Wolverines allowed a season-low 21 points in the first half, two fewer than Wisconsin scored earlier this month and held Purdue to its lowest overall point total at home this season.

Purdue: Williams has 12 straight double-doubles. ... Williams, Eric Hunter Jr. and Jaden Ivey were the only players to make more than two baskets. ... The Boilermakers fell to 6-1 at home this season though they have have played more games than any other Power Five school.

Ivey replaced Stefanovic in the lineup and had 12 points, five rebounds and five assists but was nowhere near as efficient as Stefanovic. Ivey was 3 of 14 from the field, 0 for 5 on 3s and had three turnovers.

Michigan: Takes an eight-day break before hosting Indiana next Saturday.

Purdue: Completes a two-game homestand next Saturday against No. 17 Minnesota.