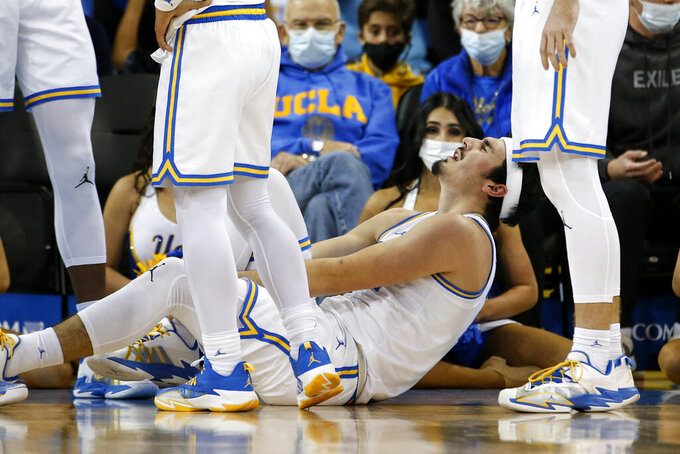 UCLA guard Jaime Jaquez Jr. (24) reacts after being injuried in the first half of an NCAA college basketball game against Stanford Saturday, Jan. 29, 2022, in Los Angeles. (AP Photo/Ringo H.W. Chiu)

LOS ANGELES (AP) — Already down two players, UCLA lost another. The seventh-ranked Bruins shrugged it off and kept on going.

Jules Bernard had 16 points and nine rebounds and UCLA's defense stymied Stanford's shooters in a 66-43 victory Saturday night, giving the Bruins sole possession of first place in the Pac-12.

UCLA (16-2) won its sixth in a row and improved to 8-1 in league play, snapping a tie atop the standings with idle Arizona.

“It was my time to play tonight and I enjoyed every minute out there with my teammates,” Kyman said.

Jaime Jaquez Jr. was limited to seven minutes after tweaking his already sore right ankle when he stepped on another player. Jaylen Clark missed his third straight game while in concussion protocol.

“I just knew given Jaime’s position I had to get on the glass a little more and be sort of a physical presence down low,” Bernard said.

Isa Silva scored eight points off the bench to lead Stanford (12-7, 5-4), which had its two-game winning streak snapped. The Cardinal never led and struggled from the start, making just one basket in the first six minutes.

“Our pressure dictated the game,” Bruins coach Mick Cronin said. “The effort under the circumstances really was unbelievable.”

UCLA narrowly missed holding an opponent to 12 field goals or fewer for the first time since beating Notre Dame on Jan. 29, 1972. Silva scored inside for Stanford's 13th and final field goal with 26 seconds remaining.

“The main thing is just deflections,” Bernard said. “The last three, four games we’ve been at, above or near 40 deflections each game. We’re really forcing teams out of their playing style.”

The Bruins struggled through their own stretches of cold shooting. They were 22 of 59 from the field and missed 25 3-pointers, with Bernard going 1 of 8 and Kyman 1 of 9 from beyond the arc.

UCLA raced to a 31-10 lead. Stanford was stuck on 10 points for nearly six minutes. It made just 5 of 25 shots in the half and committed 14 turnovers, allowing UCLA to score that many points on the miscues.

The Bruins endured their own scoring drought late in the half before Kyman and David Singleton hit back-to-back 3-pointers to send them into the break leading 37-18.

Stanford was held under 20 points in a half for the first time since November, when it had 20 against Baylor.

Stanford: The Cardinal failed in their bid to sweep the LA trip for the first time since 2004-05, but they earned a big win over No. 15 USC. Now they head home for four straight games where they are 8-1, winning five of those by double digits. They'll play the Bruins again in 10 days. “We have eight games in 17 days. We don't have a lot of time to wallow in self-pity or celebrate," Haase said. "We have to learn from film. There's not going to be a lot of practice time.”

UCLA: The Bruins completed a big week at home, winning three games, including against No. 3 Arizona, and improving to 9-1 at Pauley Pavilion. They took the last two without Juzang, who is asymptomatic and could return next week at Arizona. The Bruins' defense held all three opponents under 60 points.

UCLA: Visits No. 3 Arizona on Thursday night, nine days after the Bruins won by 16 points at home.