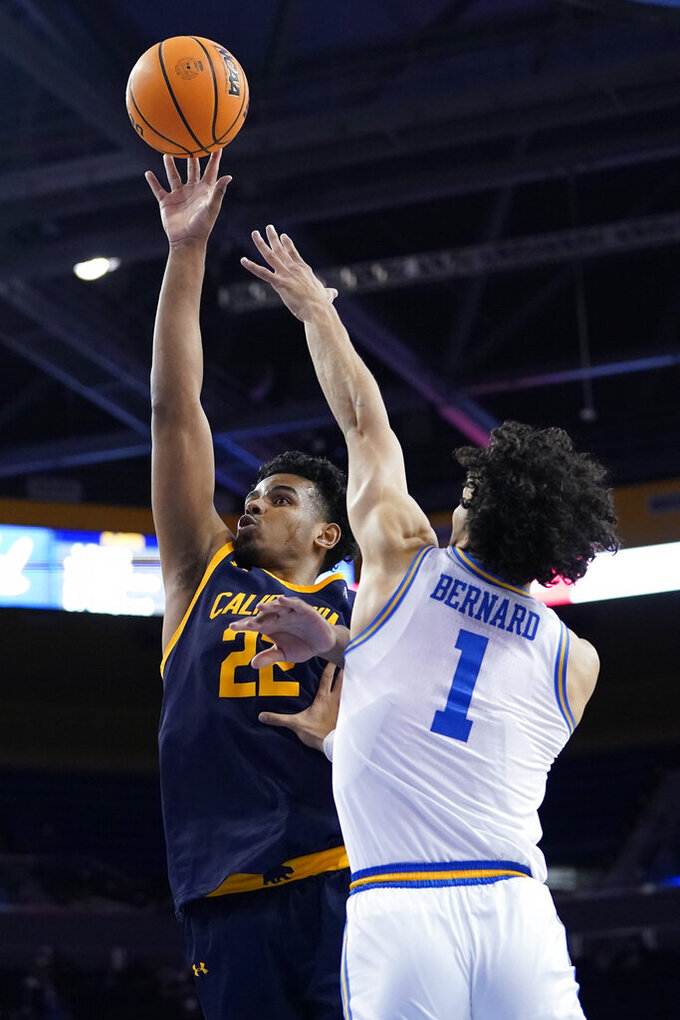 Led by Jaime Jaquez Jr. with 15 points, the seventh-ranked Bruins routed California 81-57 on Thursday night to gain sole possession of first place in the Pac-12 with their fifth straight win.

All but one of UCLA's 10 players scored on a night when Juzang was sidelined by COVID-19 protocols. Cody Riley added a season-high 14 points, and Jules Bernard and Peyton Watson had 12 points each.

Jake Kyman scored 10 points and had three steals in 20 minutes, and David Singleton had five points, four rebounds, two steals and one block in 29 minutes off the bench.

“It was next-man-up mentality,” said Jaquez, who had four of UCLA's 14 steals. “We have a really deep team. When guys have opportunities, they step up. Guys like Jake and David really stepped up and helped us get this W.”

“It could be easy after a game like Arizona to roll over, but we came out with intensity like we had before and just tried to keep that for this game,” Jaquez said.

Cal (9-11, 2-7) dropped its season-high sixth in a row. The Bears were led by freshman Sam Alajiki with 11 points in his second start of the season. Kuany Kuany and Jordan Shepherd had nine points each. Andre Kelly, the team's second-leading scorer, and fellow starter Jalen Celestine were in foul trouble in the second half.

“Our defense is absent right now and we have to find it,” Bears coach Mark Fox said. “We’ve got to be able to roll our sleeves up and do the dirty work on he defensive end first, which will help us on the offensive end.”

The Bruins went to the line on four straight possessions in the second half, making 6 of 8 free throws for a 65-45 lead.

Kyman and Watson combined to score 14 of UCLA's final 17 points. The Bruins ended the game with three straight 3-pointers, two in a row by Kyman and one by Russell Stong, who came off the bench after the student section repeatedly shouted, “We want Russell!”

“Russell and Jake work really hard every day,” Watson said. “We see it every day in practice. We're just happy everybody else gets to see it.”

The Bruins have lost just once — at Oregon — since returning from a 25-day layoff due to COVID-19 issues in the program. They are 9-1 at home.

California: The Bears have just one win so far in 2022, beating Arizona State by 24 points on Jan. 2. That ended what was a five-game winning streak before their current struggles set in. The schedule doesn't get any easier. The Bears are on the road for seven of their remaining 14 league games, and have yet to win away from home in seven games.

UCLA: The Bruins won't get Juzang back in time for their third game of the week on Saturday. Coach Mick Cronin said the junior guard had a random test that came up positive, although he's feeling good. But winning without Juzang gave the team a huge confidence boost. UCLA is also waiting on Jaylen Clark, who has missed two straight games while in concussion protocol. Cronin said he's not expected back anytime soon.

California: At Stanford on Tuesday in the first of three games next week.

UCLA: Hosts Stanford on Saturday to close out a three-game homestand.