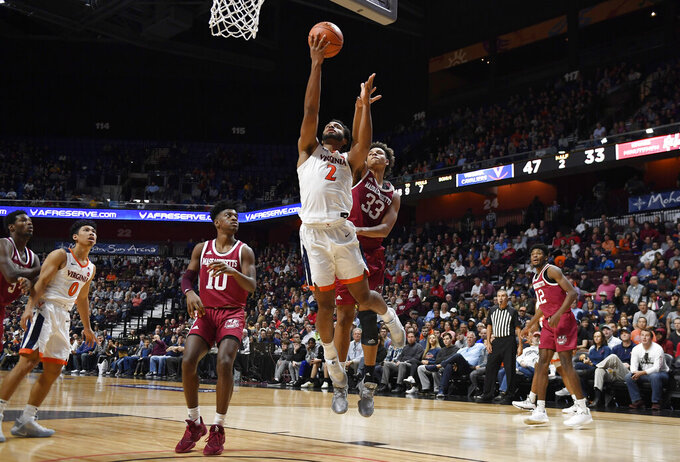 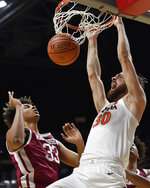 UNCASVILLE, Conn. (AP) — Virginia wasn’t hitting its long-range shots against Massachusetts and the Cavaliers’ best player was on the bench for almost half of the game.

But Braxton Key scored 16 points and Virginia used its stifling defense to hand UMass its first loss of the season, 58-46, on Saturday in the Hall of Fame Tip-Off Tournament.

Kihei Clark added 14 points and Jay Huff chipped in with 10 points and eight rebounds for the defending national champions (5-0), who limited the Minutemen to just 15 baskets and 30% shooting.

“We know we can be in any game with any team,” Key said. “We haven’t found our rhythm yet shooting the ball this year. I don’t think we’ve had a game where we shot the ball really well. But we’re going to keep digging and keep playing defense really and we’ll figure it out.”

UMass scored 11 straight points to close the first half and trailed just 29-24 at halftime after Tre Mitchell made layups on three straight trips down the court. They cut that deficit to three points after a short jumper from Pierre to open the second half.

But the Cavaliers began double-teaming Mitchell, who scored all 10 of his points before intermission, and held UMass to four points over the next 14 minutes.

“In the second half, we challenged the guys and did a good job,” coach Tony Bennett said. “We put Braxton on Mitchell and Mamadi (Diakite) came quicker on the post trap. They did get some good open shots out of it, but I thought we tightened up for stretches and we were stingier defensively.”

A dunk by Diakite on a lob from Clark highlighted the run that put Virginia in control at 49-33.

Key had Virginia’s first two baskets and 11 of his points in the first half. He also closed the scoring with a breakaway dunk.

UMass tried to speed up the pace, opening the game with a trapping press. But the Minutemen made just three of their first 14 shots.

“Tonight, we just weren’t hitting our shots, that’s all it is,” said Pierre, who was just 2 of 10 from 3-point range. “We hit those shots, I think it’s an interesting game. I definitely think we could have come out on top, too.”

Diakite, who came in averaging just under 16 points a game, scored only four points in 21 minutes. He played three minutes in the first half, picking up his second foul 8½ minutes into the game and didn’t score his first basket until eight minutes into the second half.

But the 7-foot-1 Huff picked up the slack. He hit five of his eight shots.

The Cavaliers’ defense held UMass without a field goal for six minutes in the opening half. They led 29-13 after a 3-pointer from Casey Morsell, before UMass responded with its big run.

STATS OF THE GAME.

Massachusetts had just four assists for the game, while holding the Cavaliers to nine and neither team shot well from 3-point range. UMass made just 5 of its 26 shots from behind the arc. Virginia was 2 of 14.

“A couple of them may have been bad shots, but for the most part, we got open looks,” UMass coach Matt McCall said. “We have all the confidence in the world in our guys when the ball leaves their hands. (If we make them) now you look down at the stat sheet and we have 15, 16 assists instead of four.”

Virginia outscored UMass in the paint 30-18.

Virginia is playing this tournament without sophomore guard Kody Stattmann, who is back in Charlottesville with what Bennett described as a virus, which also kept him out of the victory over Vermont.

“We’ll do his blood work and make sure it’s going in the right direction and we can get him back sooner hopefully than later, but we’re obviously going to let the doctors take good care of him,” Bennett said.

UMass: The Minutemen had scored at least 80 points in the past three games and came in averaging 78.4 points per game.

Virginia: The Cavaliers have won the past six November tournaments they entered and are 137-36 in nonconference games under Bennett.

Virginia: The Cavaliers will play for the championship on Sunday against Arizona State, which beat the Red Storm 80-67.

“We’re going to have to make shots,” said St. John’s coach Bobby Hurley. “They’re one of the best defensive teams in the country, and with their pace of play it’s going to be a real contrast in style, obviously.”